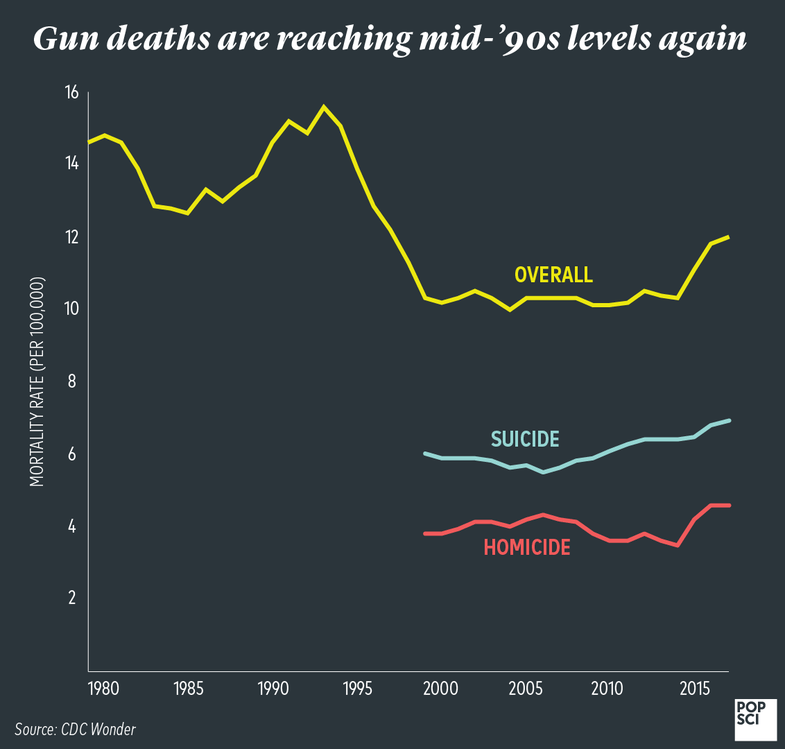 Data on homicides versus suicides are only recorded in the CDC database called WONDER from 1999 onward. Infographic by Sara Chodosh
SHARE

The 21st century has been fairly smooth sailing as far as gun deaths go, but in the last few years we’ve begun to ruin our track record.

Data from the Centers for Disease Control shows that 2017 was the third consecutive year that the mortality rate from firearms rose. We’re now up to 12.0 deaths per 100,000 people, a rate we haven’t seen in the U.S. in 20 years. Two-thirds of those are suicides, the vast majority of which are white men. The remaining one-third of deaths are homicides, which are predominantly black men.

Of course, this information comes not from a study of firearm mortality but from a CDC database. In America we don’t allow federal funding for studies to understand gun deaths, which means we are woefully uninformed about how to combat firearm violence and prevent those deaths. We only recently confirmed that semiautomatic weapons kill more people than non-automatic ones do.

As a nation, we’re one of two countries responsible for a third of the world’s gun deaths and we don’t seem to be getting any better at controlling them. If anything, we’re getting worse. We’ve only been tracking firearm deaths as their own category since 1979, but this is what our rates have looked like since then:

We’ve certainly improved since the late ’80s and early ’90s, when gun violence was at its peak, but that upwards trend in the last few years should be cause for concern. Both suicide and homicide rates are rising and last year nearly 40,000 people died by gun. Research suggests that these deaths are largely preventable. Gun control laws work and most Americans support enacting gun control of some kind. Even firearm suicides, which many people think of as solely a mental health problem, can often be prevented by removing the firearm from homes. We don’t have to stand for this.

There are some steps you can take on your own. You can call your congressperson to let them know your opinion. It’s easy to find their information by entering your street address and zip code on this site, or you can ring up the U.S. Senate switchboard. You can also donate to groups who are fighting for gun control, like Everytown or Americans for Responsible Solutions—and yes, you can support groups like these even if you are a proud gun owner. We know that the states with the highest rates of firearm mortality are also the states with the most relaxed gun laws, and countries like New Zealand prove that you can have a strong gun culture without having a high level of gun violence. It’s not an either/or situation. But if we don’t do something about these deaths, the rates may keep climbing—we’re already slipping backwards.