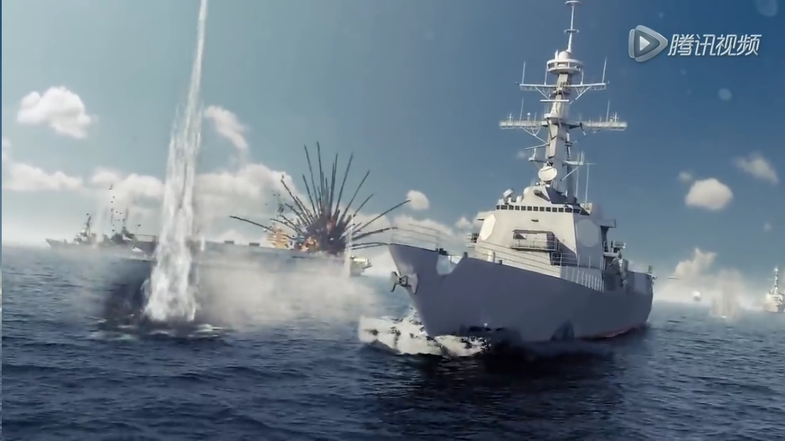 The efficacy of the DF-21D against Nimitz carriers and Aegis equipped destroyers almost looks like something from a USN officer's worst nightmare (or a defense contractor pitchbook to sell Aegis BMD). Tencent
SHARE The Y-20 “783” prototype transport plane lies smoldering on the runway of a Chinese airport, after a dastardly night time sneak attack by a foreign coalition.

Tencent, one of China’s Internet commerce giants, released a chest pumping (but visually accurate) CGI video of a victorious PLA in time for China’s 70th VJ day parade on September 3, 2015. Just like a recent technothriller featuring an unprovoked sneak attack on US soil (ghostfleetbook.com), Tencent’s five minute video begins with a nighttime airstrike on a Chinese air base by a “foreign alliance” (0:11). We then move to morning, where news casts show the Chinese version of Pearl Harbor, where the destroyed “783” Y-20 heavy transport aircraft prototype, amidst smoldering runways, stands in for the USS Arizona (0:39). In a high tech command center, an angry general’s fist slams the table (0:53) before the Chinese counterattack is launched. Chinese DF-15B TEL vehicles swarm out of their bunker for the Chinese counterattack. 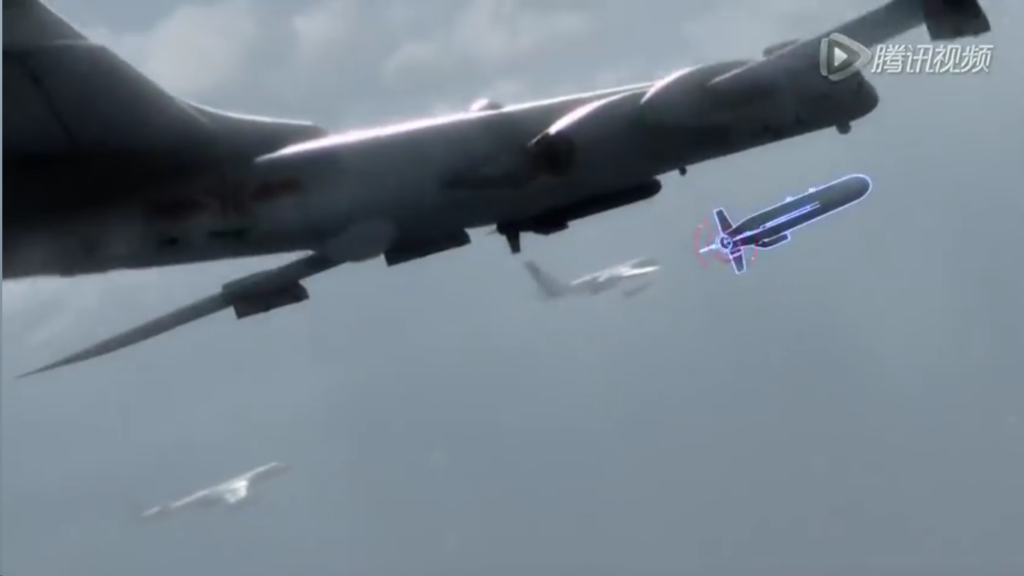 Despite being a modernization of a sixty year old Soviet design, the H-6K is currently the only bomber in production, anywhere in the world. Here, it unleashes a volley of long range LACMs to crush the prefidious “hostile power” air base that launched the sneak attack against Chinese soil. The enemy air base, with protected (but not enough) hangars and F-22A stealth fighters, has a remarkable visual similarity to the USAF facilities at Kadena, Okinawa in Japan.

Long range retaliation quickly follows, military weapons helpfully labelled by Tencent. The video is a menu of the fruits of China’s recent military buildup. DF-15B short ranged ballistic missiles swarm out of their underground bunkers and tunnels(1:10), joining DF-21D anti-ship ballistic missiles on the road (1:20), while H-6K bombers roar overhead (1:34). A barrage of ballistic and cruise missiles then rain down fury on the OPFOR base (which bears more than a passing resemblance to the US Air Force’s Kadena Air Base on Okinawa). Taxiing F-22A fighters, aircraft hangars and PAC-3 missile defense launchers are obliterated in the rain of fire (2:04, 2:10). 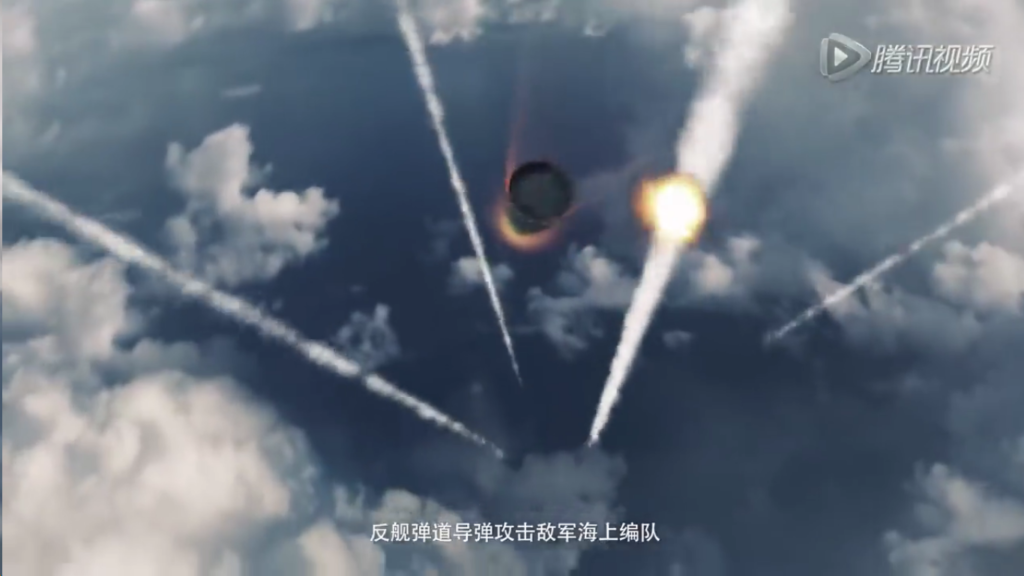 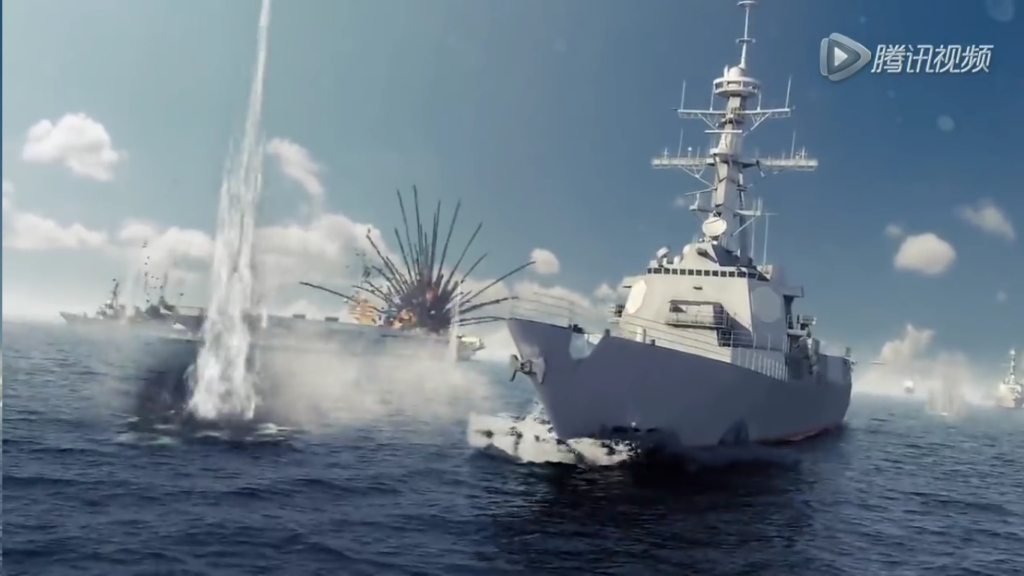 The Doom that came to Nimitz

The efficacy of the DF-21D against Nimitz carriers and Aegis equipped destroyers almost looks like something from a USN officer’s worst nightmare (or a defense contractor pitchbook to sell Aegis BMD).

At sea, a shower of shooting stars appears over the enemy navy, centered around a Nimitz class aircraft carrier (2:20). The shooting stars materialize into DF-21D anti-ship warheads, whose hypersonic reentry speed whiz past the missiles and Gatling cannons defending the carrier and its destroyers, smashing the unfortunate warships into clouds of fire and razorblades (2:40). Underwater, a Virginia class nuclear attack submarine (SSN) is defeated (2:50) by a Type 093 SSN (surprisingly not the newer Type 093B). 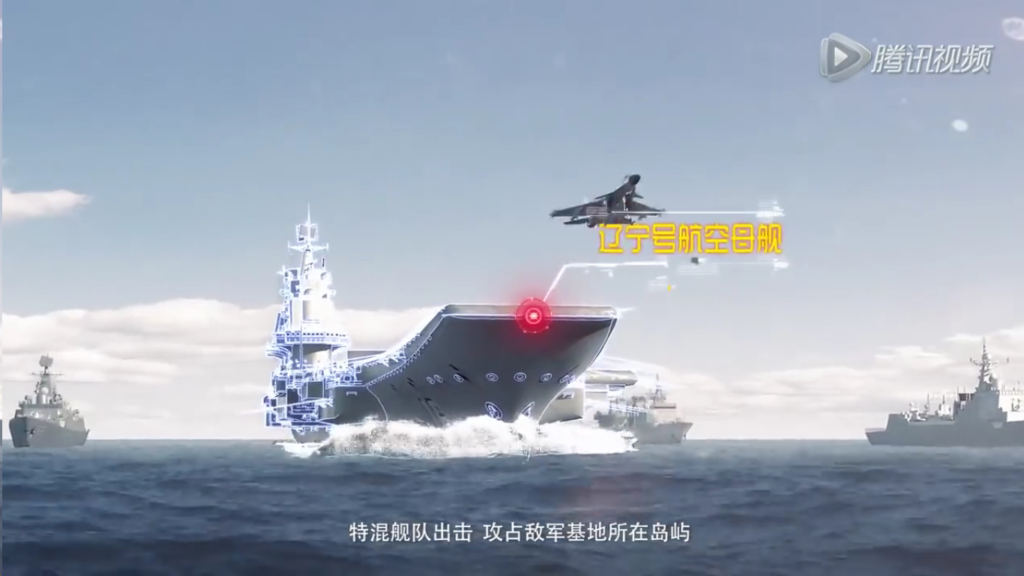 The aircraft carrier Liaoning is perfectly safe to launch flights of J-15 fighters to cover the Chinese amphibious landing. Helicopters in the Balance

Z-10 attack helicopters and Z8/Z18 transport helicopters lift off from the Type 071 LPDs to take the amphibious attack into the vertical dimension. 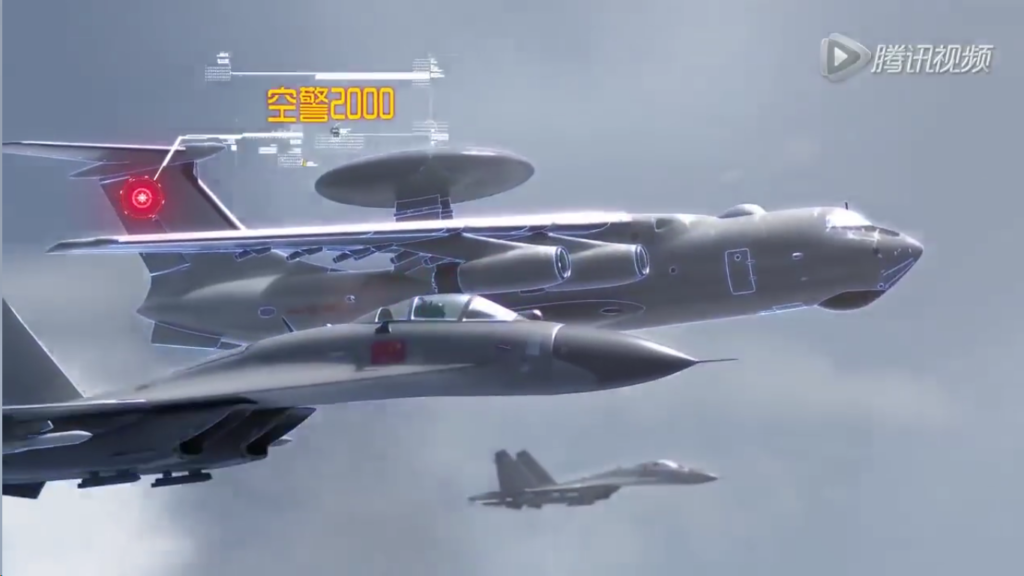 The KJ-2000 “Mainring” AEW&C aircraft provides a powerful control asset for Chinese fighters like the J-11B, warning them about incoming enemy fighters, including stealth fighters. 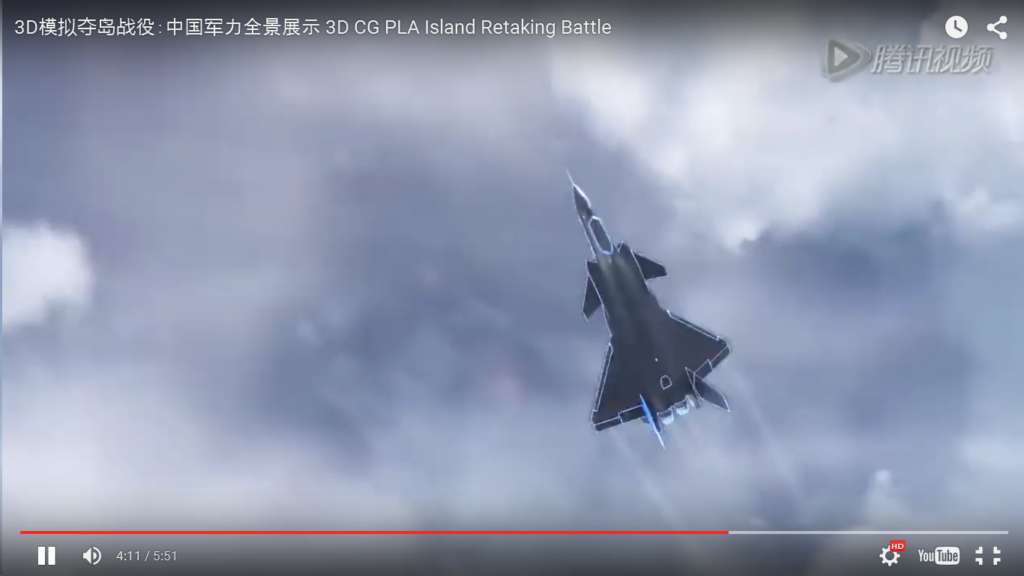 Of course, it wouldn’t be a complete Chinese war film without the J-20 stealth fighter, China’s answer to the F-22A Raptor. The J-20 here is hunting F-35 Lightning fighters. 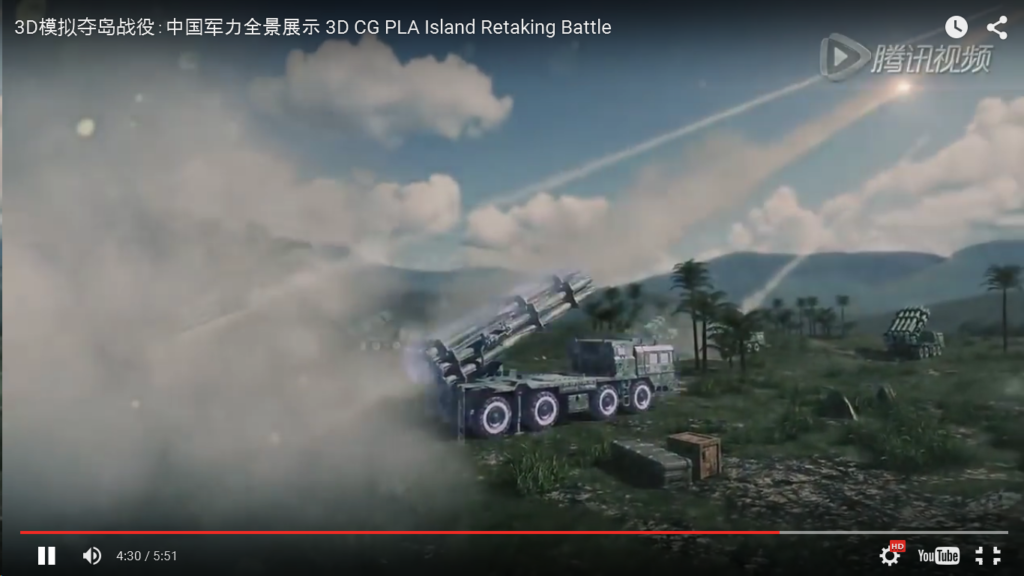 PHL-03 300mm rocket artillery bombard enemy positions. Though with their 70km+ range, it’d be a pretty large island to bring them along. Given that the ZTZ-99A is China’s most heavily armored tank, it logically leads the blitzkrieg to the heart of the enemy base. Chinese forces raise their flag over the burning ruins of the enemy air base (change the flag, and this wouldn’t look out of place in the ending for Red Dawn). 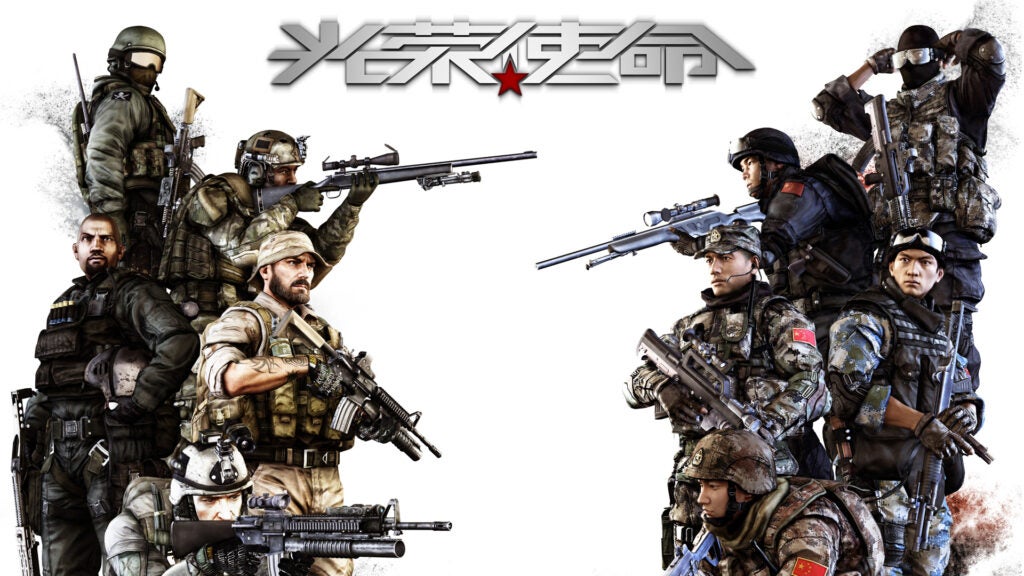 In keeping with longstanding Chinese censorship practices, the OPFOR nation remained “a certain unnamed country” (mirroring uneasiness inside the Beltway about mentioning China in the former Air Sea Battle concept). However, the OPFOR uses a variety of US only equipment, such as F-22 fighters, Nimitz class aircraft carriers and Virginia class submarines. Previous private speech versions of this genre, such as video games, have featured Western adversaries as being private military contractors, in lieu of actually identifying foreign militaries or otherwise. Anti-ship ballistic missiles have acquired a near mythical “wonderweapon” status among both PLA watchers and the broader public, in the same way that the stealth fighters are often touted as the pancea for challenges to American military supremacy.

Two other aspects stand out in the video. Faith in new military technology “superweapons” seems to have become much a staple of Chinese popular culture as it is in America. Also, the Tencent video mirrors the popular superpower self-image of “we won’t hit first, but sucker punch us and we’ll hit you back into the Stone Age.” Hopefully, like the others players in this genre of imagining world war III, these visions will stay in the realm of fiction.