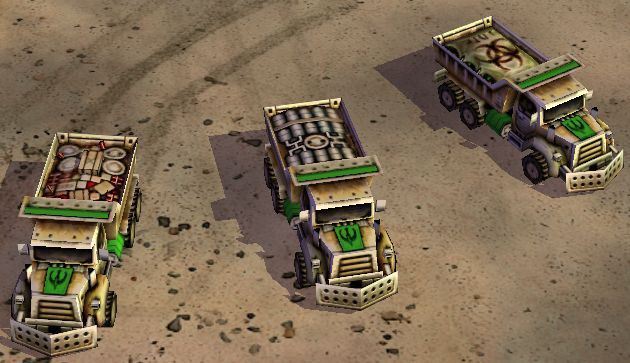 The Russian government is not known for being particularly straightforward with facts. Russia is currently backing Syrian dictator Bashar al-Assad in his brutal, 5-year-long war to regain control of his country from rebels. As part of that effort, Russia’s government and state-owned media want to discredit the people fighting against Assad. Those people include the Islamic State (ISIS), so there’s certainly a lot of unsavory characters for Russia to point to. Instead, today the Russian embassy to the United Kingdom decided to tweet out an allegation of extremists with chemical weapons, using a screenshot from the popular computer game series Command and Conquer.

It is so obviously from a video game that Russia stamped “image used for illustration purposes only” on a picture of a pixelated truck with a biohazard symbol on top of its cargo. The picture comes up second in a Google image search for “Bomb Truck,” and the exact image used is the “Bomb Truck” unit from the game Command and Conquer: Generals, according to the Command and Conquer wikia.

Who are those purported Nazis? Ever since Ukraine’s Euromaiden protests overthrew a Russian-backed leader, the Kremlin has claimed Ukraine is run by neo-Nazis. As the war in Eastern Ukraine turned violent, the propaganda war only grew weirder. This fall, Russia objected to satellite images from NATO showing Russian troops crossing into Ukraine by claiming the photos were from video games.

The bomb truck tweet is silly, but much worse has happened when Russia played fast and loose with the truth. After a Russian-made missile destroyed Malaysian Airlines Flight MH-17 in July, 2014, Russia denied any responsibility, instead floating an absurd theory that a Ukrainian ground attack plane shot it down. Years of investigation later revealed that it was, in fact, a Russian missile, and a Russian anti-air unit, that killed everyone on board that flight.

As far as explicit lies from a government backing a brutal dictator in a bloody civil war go, tweets illustrated with video games are fairly harmless. It’s a distraction from the awful truth of the war, where Russian airstrikes targeted hospitals and killed thousands of civilians. If that’s how Russia fights its wars, perhaps they should be surprised if something resembling Command and Conquer’s fictional Global Liberation Army rises against them.