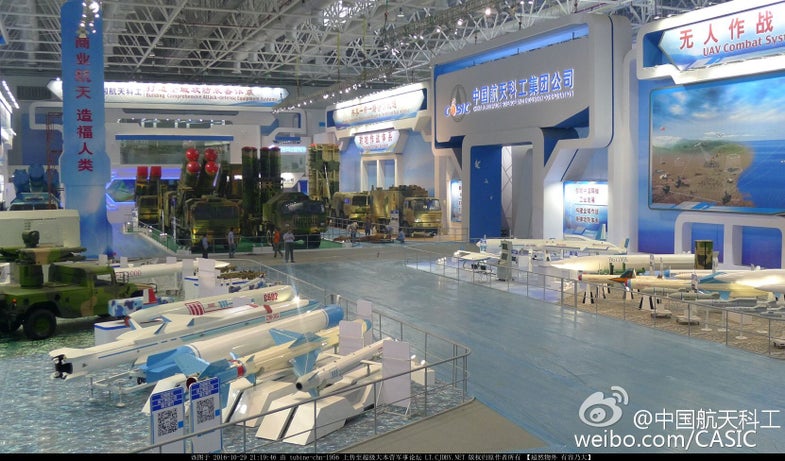 Air shows are not just about airplanes. In addition to touting flashy fighters like the J-20 and cutting edge drones, China is showcasing a wide range of high munitions at the Zhuhai 2016 Airshow. They include stealthy cruise missiles, supersonic ship killers, and interchangeable rocket launchers.

GB-6A subsonic stealth cruise missile, like its American counterparts JSOW-ER, uses a stealth glide bomb (the GS-6) for its fuselage, attaching to a turbojet engine. At about 13-16 feet long, it would likely weigh one ton with a 500 kg warhead. The GS-6A can be launched by the J-10B multirole fighter, and presumably the J-16 and JH-7A strike fighters, and H-6K bomber. The cruise missile would increase China’s A2/AD operations by providing a stealthy attack option against enemy bases and warships.

CM-302 supersonic antiship cruise missile, which has a 180-mile range to adhere to MTCR restrictions, is armed with a warhead of over 550 pounds, and thrust vectoring to enable terminal flight maneuvers to avoid close range defense systems of warships like destroyers and aircraft carriers. The CM-302 is the export version of the 250-mile range YJ-12, a highly capable ramjet Mach 4 anti-ship missile used by Chinese attack aircraft.

If a foreign buyer is found, the CM-302 would be the fastest anti-ship cruise missile on the international market.

The 103-ton LM-6 space launch rocket, which can launch a 1-ton payload to 435-mile orbit, first flew in September 2015. It’s also land mobile, with a model at Zhuhai 2016 showing off a transport erect launch (TEL) vehicle that resembles that for the DF-41 ICBM (though its kerosene/liquid oxygen engine means that the LM-6 could not stay deployed out in the field for long). However, it is not clear if exporting the LM-6 to another country could violate international arms restriction commitments China has made.

The export oriented PL-10E short-range air-to-air missile (SRAAM), China’s most modern SMRAAM, is already in service on J-10 and J-11 fighters. Nearly 10 feet in length, it has a 20-kilometer (about 12-foot) range (some sources claim the PLAAF PL-10 has a 30-40-kilometer range), and mid-body strakes to improve maneuverability. Its all aspect seeker, which can lock on to targets behind the missile, allows it to be launched against pursuing fighters to the rear of the launching aircraft.

Another interesting concept shown off at the airshow was a modular missile/rocket launcher housed inside a cargo container. Its payload can be quickly swapped between WS-43 short range cruise missile and rockets of multiple calibers such as the ubiquitous 122 mm and 273 mm caliber rockets. The WS-43 cruise missile, also called ‘loitering munitions’ has a range of 37 miles, with 30 minutes loitering time, and uses a 44-pound warhead. Mounting the modular container launcher on a truck or cargo ship would provide not just a quick-fix fire support solution for littoral environment and airlifted forces, but also offers the potential to use the WS-43 in a surprise or ambush role.

M-20 SRBM is China’s latest export ballistic missile (in the PLA Rocket Force, it’s designated as the DF-12). Each 8X8 TEL vehicle carries a pair of these 4-ton missiles. They have a 174-mile range (261-mile in Rocket Force) and a reported accuracy of 66- to 98-foot CEP (circular error probable) accuracy. The 1,102-pound warhead can either be fitted with a single warhead, or with a series of cluster munitions against dispersed targets, like tanks.

Want to Knows What It’s Like to be Blown Up by a Chinese Missile? Ask this Ship