Inspired by a seed, this rotating drone will make your head spin 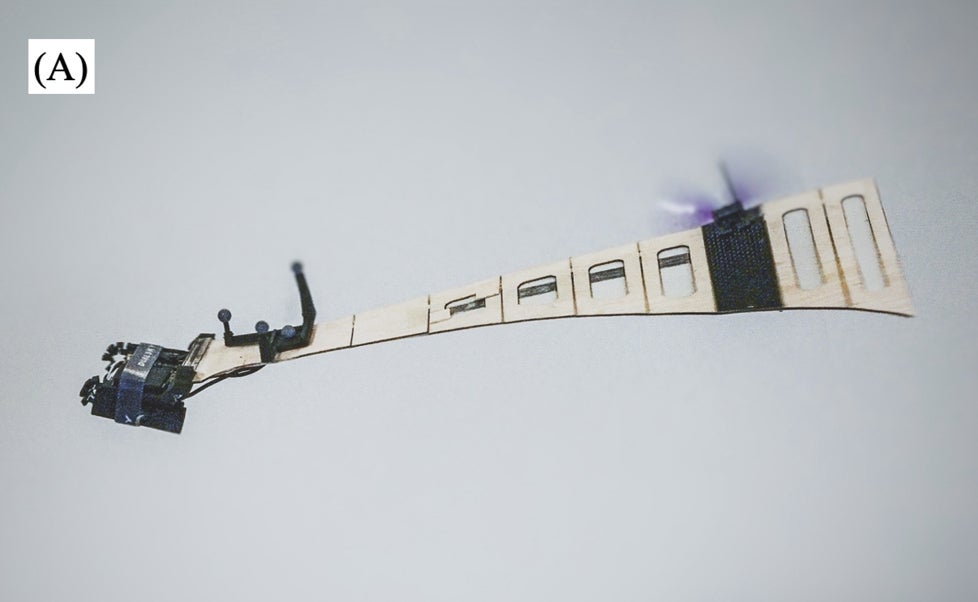 In flight, the drone resembles a giant seed pod, lofted in the wind and buzzing through a rotor.

Created by a team at the Singapore University of Technology & Design, this new seed-inspired one-wing drone is named F-SAM. It is a type of monocopter, or a helicopter with only one rotating blade. Engineers first developed a monocopter in 1913, with testing in 1915, but a problem arises in trying to make a crewed aircraft out of an entire spinning wing: It is really easy for a human pilot to get dizzy.

Drone monocopters, like the F-SAM, have been much more common, and have seen a particular burst of design in the 21st century. Generating lift with its wing-body as it spins, a monocopter replaces the many moving parts of a quadcopter with a single elegant wing pulled forward by one attached propeller.

The design of monocopters is inspired by samara seeds, which when released from a tree, spin and float on the air until they are carried far away into fertile soil. What sets the F-SAM apart, not just from other drones but even from other drone monocopters, is that its wing is foldable, making the entire drone compact and storable when not in flight.

[Related: Floating whirligig microchips could help us monitor nature without leaving a trace]

“One of the advantages of the monocopter platform is its inherent ability for autorotation, the mode of flight of the samara seeds,” write the paper’s authors. “The monocopter is thus equipped with a natural fail-safe, thanks to this ability to descend gracefully in autorotation in the event of a power failure.”

Thanks to changes in how and when the F-SAM generates thrust, the drone can be steered, allowing it to navigate through complex challenges like a loop in and out of a window. The researchers demonstrate a flight time with the drone of at least 15 minutes.

[Related: Watch a C-130 cargo plane grab a drone out of the sky]

In their paper, the researchers explicitly compare the F-SAM to two small drones developed for military use. One, the palm-sized Black Widow, came from a mid-2000s DARPA project to demonstrate a fixed-wing scout drone, which was useful at distances but struggled with the precise maneuvering needed for indoors. The other point of comparison made is the Black Hornet, a sparrow-sized helicopter that can navigate in small spaces but is made of many small moving parts.

In 2009, Lockheed Martin developed a monocopter called the SAMARAI, a DARPA-funded project originally designed to deliver a small scout. The SAMARAI lost the camera and got larger in subsequent tests, proving the drone could work but missing a clear use case.

With its simple body and high maneuverability, the F-SAM offers a drone that soldiers could someday lift from their pockets, and then use to explore the inside of a building. What makes this a somewhat harder task than the Black Hornet or even a small quadcopter is that any camera attached to the F-SAM would also be spinning. For video, that would make the person watching the transmission as dizzy as if they were themselves spinning, or it would require a complex stabilization mechanism on the drone. Other sensors, like the spinning lasers of LiDAR, would be a natural fit, allowing the F-SAM to map out the interior of a room, even if it couldn’t see it in the traditional sense.

“[F-SAM] can be a good contender for single-use GPS-guided reconnaissance missions,” Shane Kyi Hla Win told IEEE Spectrum. “As it uses only one actuator for its flight, it can be made relatively cheaply. It is also very silent during its flight and easily camouflaged once landed. Various lightweight sensors can be integrated onto the platform for different types of missions, such as climate monitoring.”

Using the natural aerodynamics of the drone’s body, as well as its ability to land gently, means that several F-SAM drones could be used to seed sensors in advance of a military advance. With low-power uses, perhaps microphones picking up audio or even just little seismometers listening for the tell-tale rumble of tanks, scattered drones could be a rapidly deployed and easily concealed sensor system, providing immediate early warning of enemy movements.

With the F-SAM compact enough to fit in a pocket and be launched by hand or from the ground, the form opens up new options for how militaries might add reconnaissance to their forces. If sending an F-SAM to scout ahead is as effortless as hurling a grenade, scouting drones could move from a specialized piece of equipment to standard, almost disposable gear.

Watch it in flight below: