Megapixels: It was rediscovered by a drone. 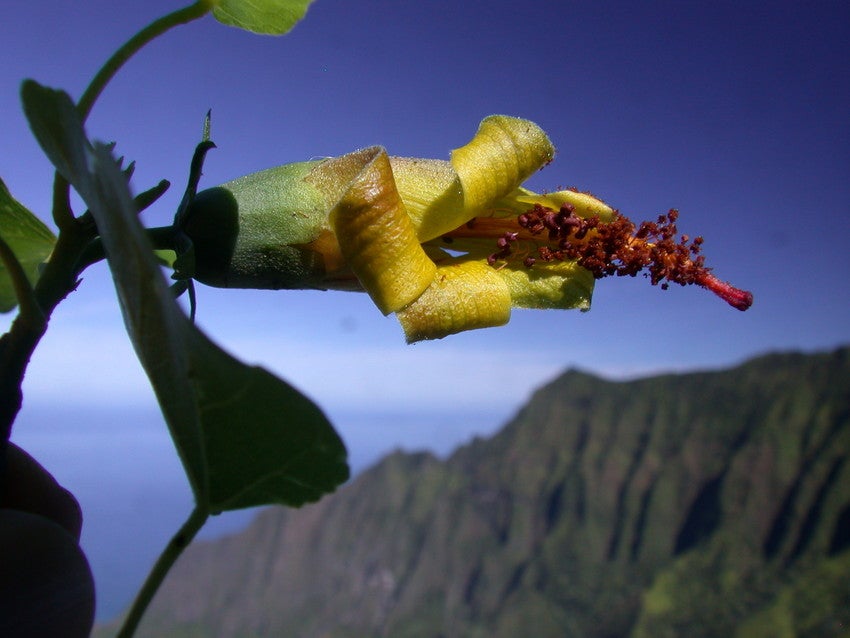 For thousands of years, botany has been firmly rooted in the earth—much like the plants under study. But more recently, the scientific discipline has lifted off.

Last week, researchers at the National Tropical Botanical Garden on the island Kaua’i announced they’d discovered a few thriving members of Hibiscadelphus woodii, officially (and now it seems mistakenly) declared extinct in 2016. The plants—which grow in Kalalau Valley, by all accounts Hawaii’s equivalent of the Cliffs of Insanity—were found not by foot, but by drone.

The flower, seen above before its brilliant yellow flowers go wine-darken with age, was formally discovered in 1991 by Ken Wood, a conservation biologist who specializes in the plant life of the Pacific islands. He named it Hibiscadelphus woodii, or Wood’s hau kuahiwi, Hawaiian for “snow mountain.” The species has long been plagued by habitat loss; human disturbance, invasive species, and diseases threaten plants and animals on island archipelagos around the world. This is particularly troubling, because these species often occur only in one place—the place they are no longer safe—and nowhere else on Earth. Given this particular flower was last seen in 2009, scientists had the sunny relative of the hibiscus listed as extinct in 2016.

But as new drone footage reveals, the species wasn’t dead, it was just hiding.

In 2016, the same year the plant was listed extinct, the National Tropical Botanical Garden teamed up with drone operator Ben Nyberg to supplement the work of intrepid scientists like Wood, who rappel down cliffs and trudge through rainforests to conserve plants. In January, National Geographic reports, Nyberg saw what looked like a Hibiscadelphus woodii plant while surveying via drone. (His strategy, the magazine added, combines a methodical “grid system” analysis with “intuition.”) The following month, Nyberg and Wood hiked 700 feet into the valley, according to Quartz. Unable to go further, they flew a drone 800 feet deeper into the ravine. The image the drone transmitted back to their portable monitor confirmed their hopes: living Hibiscadelphus woodii plants.

This isn’t the first time a species considered extinct has been found again after a long and troubling absence. This year, as Nyberg was flying his drone into the Hawaiian tropics, researchers on Indonesia’s North Moluccas island found the world’s largest bee species, Megachile pluto, hiding in plain sight. Biologists also found a female Chelonoidis phantasticus, a species of giant tortoise presumed extinct for a century, hiding in the underbrush. And still other researchers scooped up some potential mates for Romeo, recently thought to be the last Sehuencas water frog alive. While these finds are legitimately joyous, three golden Hibiscadelphus woodii can only do so much to illuminate an increasingly dark and depleted natural world.

But, just like a botanist’s drone, hope tends to take flight.