Planes of the future will feature virtual reality, yoga studios, and lots of cauliflower

These airlines are betting you'll love spending 20 hours on a plane. 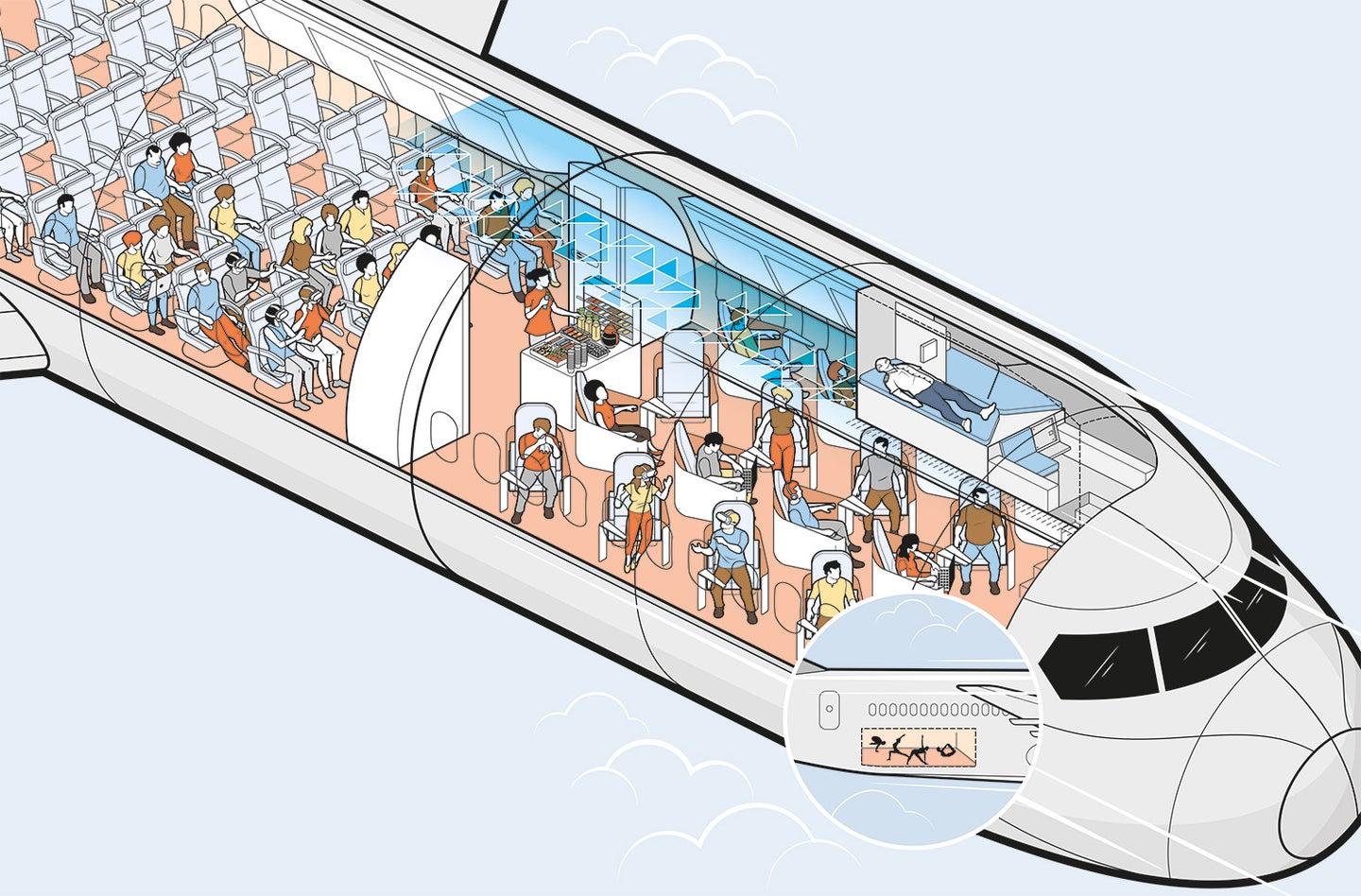 In 2018, Qantas introduced the first nonstop link between ­Europe and Australia. Clocking in at 17 hours, an extended flight like this is possible only because airplane makers such as Boeing and Airbus have spent decades on innovations, including fuel-friendly wing shapes and stronger, lighter materials. But keeping a plane in the air all day is useless if you can’t keep customers happy in cramped, sterile cabins for the duration. Plans include wider seats, lights that reprogram circadian rhythms, and cabin air that’s more pleasant to breathe. Also, they might finally speed up the ­Wi-Fi. But they’d better hurry: Qantas plans to schedule 22-hour flights by 2022.

The most coveted inches on any plane are the ones we sit on—the economics of air travel forces most of us to cram into seats averaging just 17 inches across. But slightly wider seats might have to make a comeback for drawn-out journeys. Research from the London Sleep Centre shows that increasing width to 18 inches improves passenger sleep quality by 53 percent. Airlines are also looking at ways to provide more legroom. One option: padding seatbacks with thinner material.

Qantas worked with nutritionists to design an anti-malaise menu for 17-hour jaunts from Perth to London. Meals emphasize fresh ingredients with high water content—such as cucumbers, strawberries, ­celery, and leafy greens—so passengers don’t get too dehydrated. This helps cut down on fatigue and headaches.

Singapore Airlines is rewriting the menu for its 18-hour New York-bound routes too. Foods low in salt keep diners hydrated, while those with minimal carbs stave off spikes in blood sugar. The company is currently considering swapping out potatoes for ­cauliflower, which ​does both.

Ever wonder why you feel exhausted ­after a long flight? It might be because most aircraft cabins re-create Earth’s ­atmosphere at 8,000 feet, where thin air makes our hearts and lungs work extra hard to supply our bodies with oxygen. Pumping most planes’ air pressure higher would stress weak points such as windows and doors, but Boeing reinforced the 777X’s fuselage to withstand cabin pressures at 6,000 feet. That also means more humidity, which should alleviate the transcontinental scourges of dry eyes and itchy nasal passages.

4. Take off and tune out

Perhaps the ­easiest way to improve a lengthy trip is to help passengers forget they’re even flying. Unfortunately, in-flight Wi-Fi tops out at a ­Netflix-​­throttling 15 mbps. Airbus aims to speed that up, pending upgraded telecom satellites and transmission stations. But even if onboard internet never supports binge watching, future flyers could enjoy superior entertainment options. Airbus is also experimenting with immersive OLED displays and even virtual-reality headsets. What better way to soothe your nerves during a 22-hour flight than pretending you’re somewhere else?

Our bodies set their circadian clocks according to cycles of light and dark. Many airlines ­already use full-​color LED lighting strategically on long-haul flights to beat ­fatigue, with brighter hues simu­lating daylight, and warm pinks to tell your body it’s time for sleep. Airbus has developed 17 million light and color combinations that go beyond simulating night and day: These light-­therapy techniques mimic various outdoor environments and can help sync passengers’ ­internal clocks with their destination’s time zone.

6. Asleep on the job

Protracted routes ­require multiple sets of crews working alternating shifts. Off-duty pilots recharge in racks right below the cockpit or above business class. The cabin attendants typically slumber in bunkhouses hidden above the last few rows in economy. However, this space is cramped, so crewmembers forced to tuck in for several sessions of shut-eye aren’t getting the most restful sleep. Both ­Boeing and Airbus have made upgrades: wider, longer bunks with increased overhead space, closed off with thick, noise-­muffling curtains.

Most planes hide extra cargo compartments in their bellies. But few airlines actually fill the space with freight pallets as intended. On the Airbus A330 aircraft, that unused space is 111 square feet—about the size of a Manhattan living room. The company has all sorts of remodeling ideas, from the practical—think infirmaries and business centers—to fanciful amenities such as playrooms, swanky lounges, yoga and cycling studios, or even nap areas full of cozy bunks for travelers to enjoy.