As promised, Lockheed Martin finally put its SAMARAI monocopter drone on display at AUVSI’s drone extravaganza in D.C. this week,... 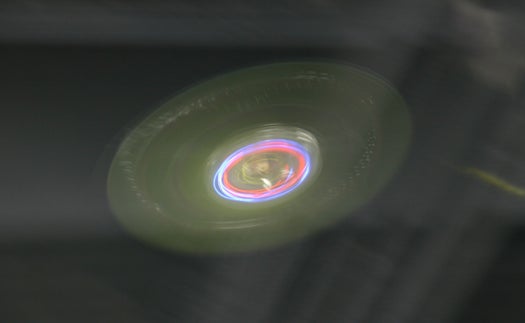 As promised, Lockheed Martin finally put its SAMARAI monocopter drone on display at AUVSI’s drone extravaganza in D.C. this week, for the first time flying it before a public audience as PopSci and everyone else in the air demo area looked on in awe. After all, the thing has just one rapidly rotating wing–it doesn’t really look like it can stay aloft by itself. Seeing, however, is believing.

The name (it’s not a typo) is actually derived from samara, or maple seeds, on which the monocopter design is based. Those seeds, sporting a single wing-like accessory, spiral from their branches and spin their way through the air–a natural development that allows maples to disperse their seeds more widely.

Lockheed’s version is a bit bigger (but sill weighs less than half a pound) and noisier, as you’ll see below. It also packs a camera that remarkably is able to maintain a steady view in one direction, demonstrating its eventual ISR potential (that camera also can turn 360 degrees with no gimbal). If you turn up your sound, you can hear Lockheed’s own Kingsley Fregene, principal investigator for SAMARAI, explaining how it works. What he didn’t explain to us is how he knew that adding a couple of neon lights to the bottom would make this demo so much cooler.