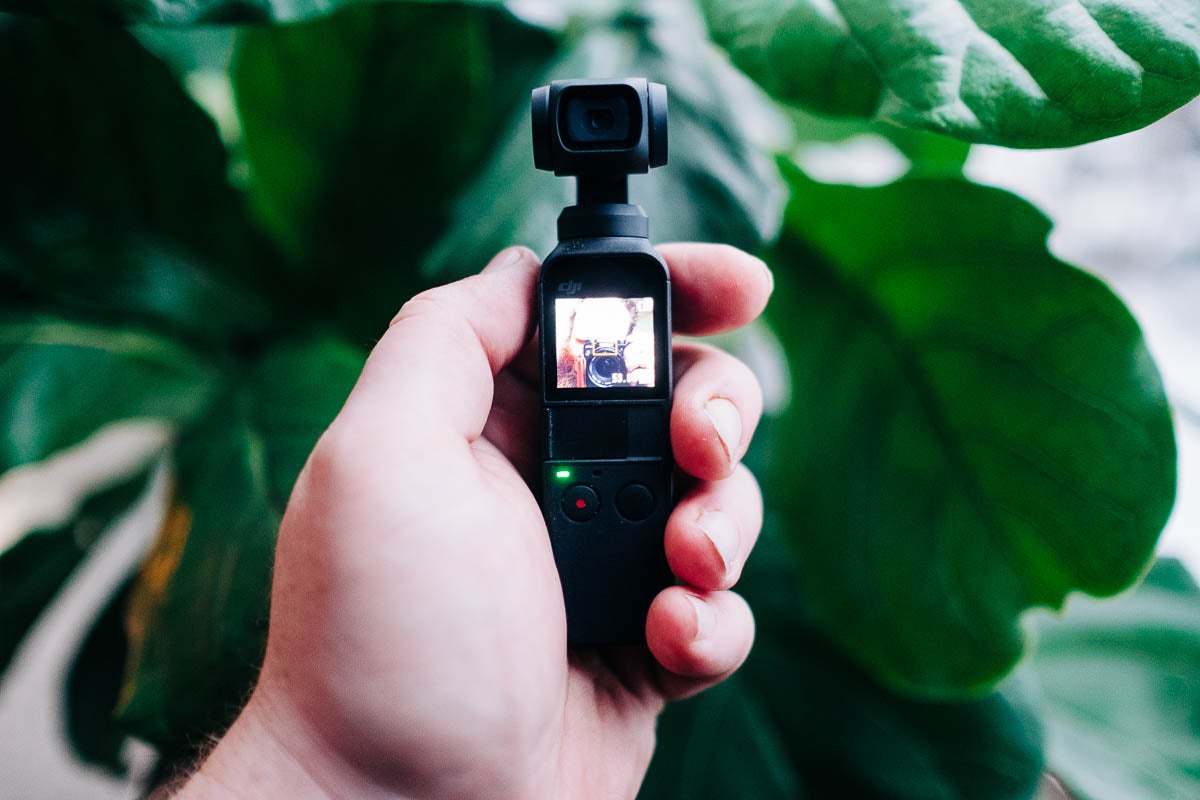 I’m a snob about camera stuff. I like pricy lenses, big imaging sensors, and poking through complicated menus that let me tweak my camera’s settings to the point where I’m the only one that knows how to actually use it. So, when DJI announced the Osmo Pocket, its all-in-one camera with a built-in stabilizer, I appreciated how useful it could be for YouTubers and other types of video bloggers, but I truly wondered if it made sense as a professional piece of kit. As it turns out, DJI did something truly impressive in simplifying the camera and stabilizer into one extremely usable little package that weighs just four ounces and is better than the sum of its parts.

The top of the Osmo Pocket is a camera, similar to what you’d find on one of DJI’s drones. It shoots 4K and captures still images with various shooting modes like time lapse. The camera is integrated onto a three-axis gimbal, which is basically a robotic cradle that uses information from internal orientation sensors to detect camera movement and counteract it by instantly adjusting to keep things steady. The result, then, is footage that doesn’t suffer from distracting shakes and jiggles.

So, if you want to walk around talking into the camera like so many vloggers do, this can keep the camera steady and locked onto your face so you can concentrate on explaining why Super Mario Bros. 2 is actually one of the best games in the series despite its troubled history or whatever thing YouTube viewers want to hear about.

But, back to the device.

Neither of the prime components—the camera or the gimbal—are particularly revolutionary, but the appeal here is in the final product. DJI and other companies sell stand-alone gimbals that can stabilize a smartphone or a dedicated camera, and other companies make cameras that shoot pretty footage. Those require more steps, though—you have to make sure both gadgets are charged and then you have to sync them together. The Osmo Pocket’s draw is that you can take it out of your pocket and start shooting.

Video is this camera’s primary objective, and the specs reflect that. The camera tops out at 4K resolution footage at 60 fps, which is what you can expect to get from the top setting in the most recent iPhone. If you want to shoot slow-motion, it will capture 1080p footage at 120 fps, which translates into video that’s four-times slower than real life.

If you want to shoot stills, you get 12 megapixel files, which is also standard fare for smart phones.

At the end of the day, the camera is very similar to a modern smartphone in pretty much every way. If you’re familiar with camera jargon, it has a 1/2.3-inch sensor and a lens with an f/2 aperture. Those specs should sound familiar from the smartphone world. That’s how you should expect the footage to look from a pure image quality perspective. This isn’t going to beat a high-end DSLR or mirrorless camera with a pro lens. But the pictures that come out look totally acceptable.

This is where the Osmo Pocket differentiates itself from regular smartphone footage. The gimbal is impressively smooth, especially if you’re just getting into stabilizers like this and you’ve never used a bigger model. When you turn the camera on, it quickly rotates into place and can track objects as you move.

This kind of stabilization tech is meant to keep cameras steady when they’re flying under a drone, so you can really jiggle it and still get smooth footage. I met someone at CES who had strapped one to the back of a running dog and still got pretty impressive video out of it that won’t make you vomit after watching it for 30 seconds.

Everything I’ve mentioned up to now is technically possible with gear that was previously available, but it’s the one-device design that makes this thing really appealing. It’s only about the size of a small flashlight, but it can do pretty much everything you need for video blogging or capturing B-Roll.

The 1-inch screen is better than it sounds when it comes to composing shots and navigating through basic menus. You can tap to focus or swipe to pull up menus—like switching from video to photo mode or slipping the camera around to point at your face—on the fly. It’s so small that it gives you an idea of what you’re shooting rather than a meticulous representation of your final frame.

If you want more control, you have to attach your phone using the Lightning or USB-C adapters that are included in the box. The phone’s screen becomes the camera’s display so you can unlock more features, like changing the white balance of the scene and more carefully view your compositions. It’s better, but at the same time, it takes away the simple point-and-shoot experience it otherwise offers.

At $350, this isn’t a casual purchase. You’re essentially buying two gadgets mashed together— and the price reflects that. But, if you’re trying to get into more serious video blogging, the price is considerably cheaper than other preferred equipment like Sony’s A6300 interchangeable lens camera, which can cost roughly $500 more than the Osmo Pocket.

When it comes to cameras in 2019, the battle has become providing something that a smartphone camera can’t, and the Osmo Pocket does that. The stabilization feels like magic, and the self-contained package made me bring it more places than I do with my smartphone gimbal. And at the end of the day, the camera you actually take with you is the one you want.