Inspired by the seeds of maple trees, engineers have built a flying microchip. 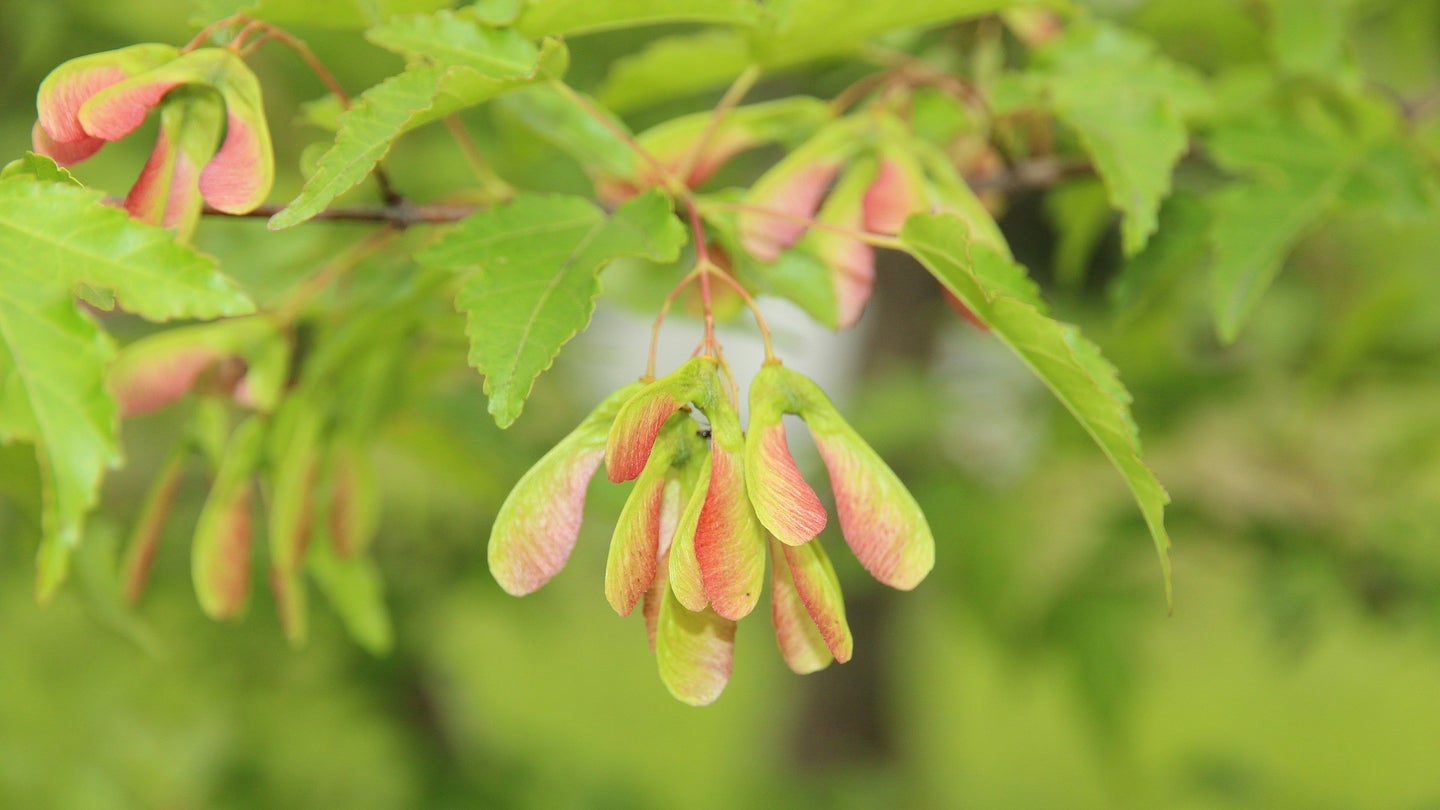 These tasty fliers (yes, the seeds inside are edible!) inspired monitoring microchips no bigger than grains of sand. Zoosnow/Pixabay
SHARE

In some necks of the woods, where maple trees are abundant, changing seasons herald the arrival of swarms of samaras. But these aren’t bugs. Sometimes called maple keys, whirligigs, or twisters, these seeds resemble delicate helicopter blades, whirling with sophisticated aerodynamics that allow them to be carried far and wide by the wind.

Now take these charming fliers, make them even more miniature, and replace the actual seeds with microchips. What you have then is a swarm of tiny airborne electronics, each potentially no larger than a grain of sand.

That’s close to what engineers at Northwestern University have created. They claim their little winged chips—“microfliers,” they call them—are the smallest ever human-made flying objects. Soon, they could become the newest, most diminutive way of monitoring the environment.

The Northwestern researchers had long worked on biotech sensors meant to be inserted into a human body. Those sorts of devices are already quite small, but powerful, carrying electronics that can fit into places like the gut or the skin and then communicate with the outside world. When they’ve done their jobs, some of them can naturally dissolve into your body’s biological matter.

“We’ve always appreciated that a lot of those same base technologies could also be adapted and exploited for monitoring the environment,” says John Rogers, a biomedical engineer at Northwestern University and one of the lead researchers of this latest project.

In setting out on that mission, the first big task was finding a way to release and disperse them over a wide area—say, the size of a large farm. At first, the researchers thought about trying to make a device that could fly by literally flapping tiny wings, like an electronic bat.

“That’s a pretty daunting engineering challenge, and so we turned to another area of bio-inspiration in controlled flight,” says Rogers.

That area was the plant world: in particular, seeds that bear wings to help carry them along the wind. Conducting simulations to fine-tune the structure, the researchers found that it was the seed of the maple tree that gave them their ultimate design.

Unlike maple samaras, though, their microchip is three-winged. It’s also packed with a tiny power source, sensors to gather data, memory to store that data, and an antenna to broadcast its findings to a computer or phone. But even though the wings are attached to a microchip, they aren’t actually electronic at all.

Flying chips in the lab

Building the device presented another challenge. Microchips are typically designed, built, and packaged flat, in what amounts to a 2D space. But to achieve any sort of useful flight, the device’s wings needed to blossom out into 3D. The researchers got around this by building the chip on a base of stretched rubber. Let that rubber bounce back in a carefully curated manner, and the wings will essentially pop up into a fully functional state.

“This is the first report of these kinds of concepts,” says Rogers. “We’re not ready to flip the switch on a manufacturing line by any stretch.”

But the researchers believe that the design has the potential to be easily scaled up into mass production. The fact that the microfliers can be built in the same setup as any other common microchip is a large bonus.

[Related: Surprise: Ants have teeth. Here’s how they keep them sharp.]

In the interest of creating devices that can monitor the environment, the researchers have already put their microfliers to the test in a number of applications: recording the pH of water, detecting particulates in the air, and measuring sunlight levels. They published their work in Nature on Thursday.

Rogers and his colleagues imagine flocks of their drifting microfliers being dropped from airplanes or tall buildings in the future. Released over a city, they could measure the levels of air pollution at different altitudes. Set free over an environmental disaster, like a chemical spill, and they could monitor where humans can’t go.

Microfliers could also watch the skies for disease-carrying airborne particles like the ones the world has been using masks and glass barriers to fend off for the last year and a half.

Now that they’ve gotten the design under their belt, Rogers and his colleagues hope to continue building. They’re picturing this microflier as just the beginning for several more types of devices: microfliers that parachute like dandelion seeds or glide like the seeds of the Javan cucumber.

That’s where their experience building devices that dissolve in the human body enters the picture: The materials they use for the microfliers can naturally degrade in groundwater (you can see a video of it here).

Without that dissolvability know-how, Rogers says, “we might not have started down this path of research in the first place.”