An accident in 1958 and more than two decades of uranium mining led to nuclear contamination. Now, airborne monitoring is helping. 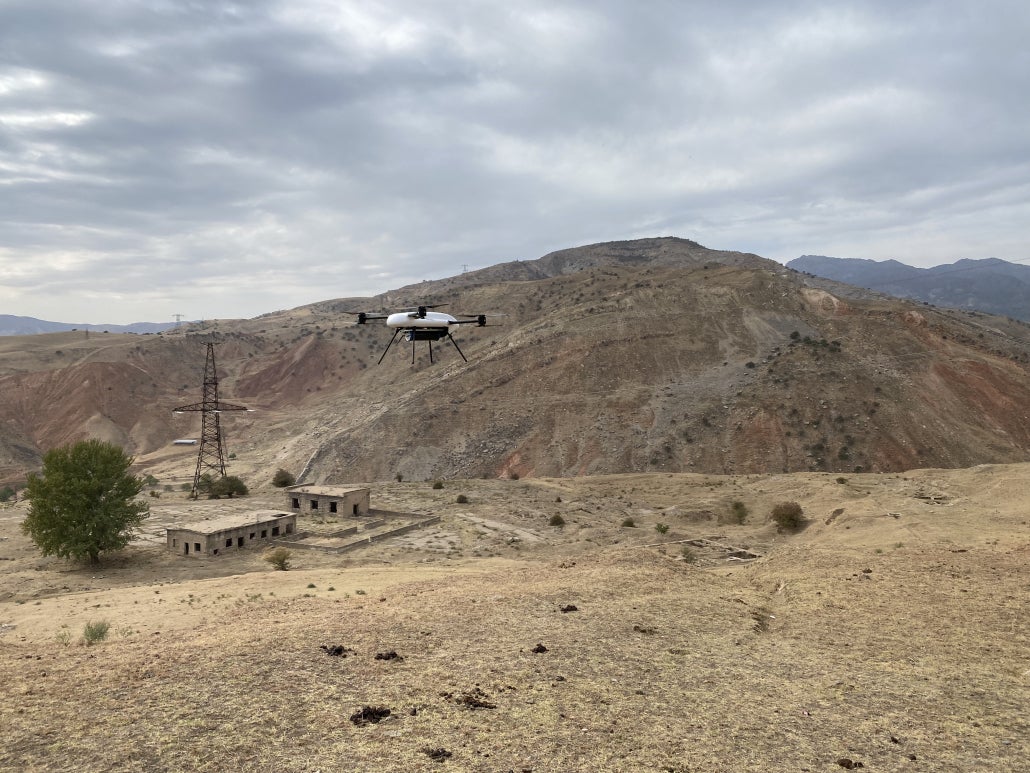 Above the town of Mailuu Suu in western Kyrgyzstan, the International Atomic Energy Agency is flying drones to monitor for radiation. For 22 years, from 1946 to 1968, people in Mailuu Suu mined and processed uranium ore for the Soviet Union. Decades later, waste still remains, and monitoring is essential to ensure that people can live safely in the environment actively contaminated by production of nuclear materials. The drone flights, captured in a video shared online November 4, are a way for new technology to ease the burden of monitoring risk.

The town of Mailuu Suu was intimately tied to the extraction of nuclear material in the Soviet Union, which meant that the town was unlisted on maps, closed to outsiders, and officially logged only as “Mailbox 200.” In the Cold War climate, where espionage was essential for superpowers tracking and estimating the size of nuclear weapons arsenals, this made some degree of sense. It also meant that the protective geography of the town, in a river valley in a region prone to landslides and earthquakes, helped keep residents in place, even as it led to risky decisions like burying waste nearby the village.

In 1958, heavy rainfall and seismic activity caused a dam failure that pushed 14 million cubic feet of radioactive waste into the Maylu-Suu river that runs through the town. Downstream, the river flows into the Ferghana valley of Central Asia, an area split between Kyrgyzstan, Uzbekistan, and Tajikistan, and a region home to 14 million people. The 1958 disaster contaminated the river and areas downstream, leaving a visceral legacy in the memories of those who witnessed it.

The concern for the town, the government of Kyrgyzstan, and international observers, is that such a disaster could strike again. Much of the waste from the site exists in “tailings,” or the sludge left over from extracting uranium ore and processing it with chemicals. In addition to the 23 sites of tailings, there are 13 sites of radioactive rock around the city. Climate change can cause a shift in rain patterns and an increase in storm severity, exacerbating the risk posed by these sites to the whole region.

Eventually, remediation will be needed to tackle all of the sites, ensuring they no longer pose a threat to people in the area or elsewhere. Before that, there is the constant work of monitoring the waste, which has traditionally been done by humans on foot or, rarely, helicopters. Now, uncrewed aerial vehicles (UAVS) or drones are being brought to bear on the problem.

“The tailor-made UAV-based gamma spectrometer will make it possible for experts to explore sites without the need to trek through difficult terrain with lots of gear,” Sven Altfelder, an IAEA remediation safety specialist, said in a June 2021 release. “By using the UAV to conduct monitoring duties, experts in the region will be able to easily gather the necessary data quickly, while avoiding potential physical and radiological risks altogether.”

A good job for a drone

Drone monitoring reduces the labor and risk of checking out the area on foot. Thanks to the ability of drone-borne sensors to carry and upload data, it also allows for a more complete picture of radioactive risk and sites, mapped in three dimensions by the flying robot.

Another perk is that drones can detect new or unmarked sites, since thorough scanning of the region by air makes it easier to find mislabeled or unknown waste sites. Drone piloting is also easier and cheaper than using crewed aircraft, and drone pilot training has fewer hurdles than that of pilots who actually fly inside the craft they operate.

The technology was tested in Germany in 2020, showing that the drone can produce a reliable and accurate radiation map of partially remediated sites. This work was funded by the European Union and the German government, which has a specific tie to Mailuu Suu. When the town was set up as a closed community in 1946, among the people relocated to work in it were ethnic Germans, alongside Crimean Tatars and Russian soldiers who had surrendered during World War II.

With proof that the drone can be used to successfully monitor the sites in Kyrgyzstan, the hope is that experts in the country, and other Central Asian countries, can be trained to take on the work. The project is supported by the governments of Kyrgyzstan, Kazakhstan, Uzbekistan, and Tajikistan.

“We will be able to use the results obtained by the UAV to explain remediation results to the local population and demonstrate that those areas are now safe,” said Azamat Mambetov, State Secretary of the Kyrgyzstan Ministry of Emergency Situations, in the June release.

The drone monitoring will aid in guiding remediation and proving its success. This, in turn, could expand possibilities in the region, with some hope from the IAEA that a remediated and safe Mailu Suu could not just stop being a risk, but could even become a destination for travelers and tourists, eager to behold the natural beauty.