The F/A-18 Super Hornet received fuel from the Navy's Stingray drone in a key initial test. 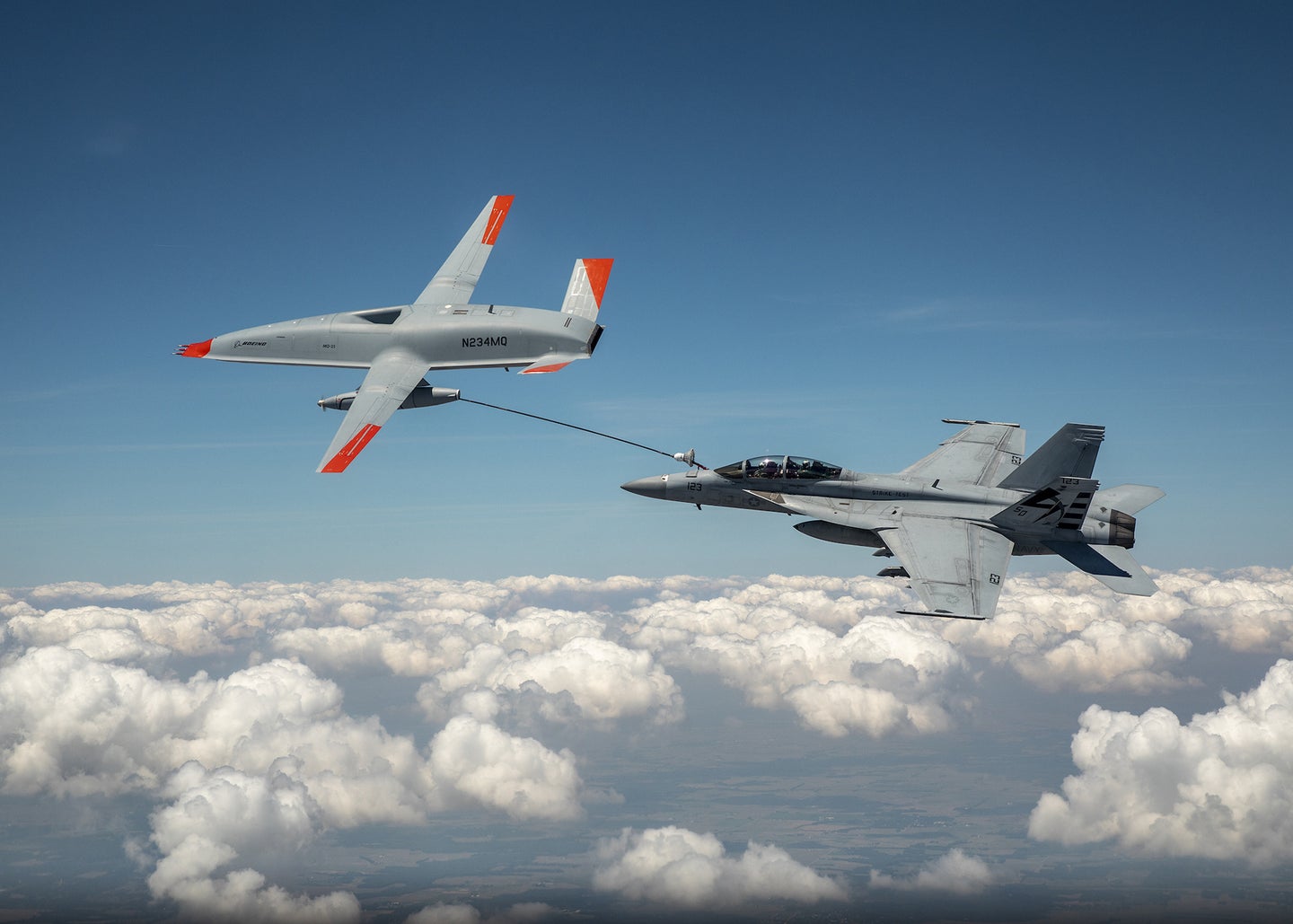 Last Friday, an F/A-18 Super Hornet fighter jet flew behind another aircraft, dipped its wings a little as it adjusted its position, and then connected its probe with a hose trailing from the plane in front of it. It then received hundreds of pounds of fuel, all while traveling at an altitude of around 10,000 feet.

While it’s common for military aircraft to refuel in the sky, up until now, the planes giving them a top-off have always had human pilots. What sets this moment apart is that the refueling aircraft was a drone called the MQ-25. While there were two people in the Super Hornet, the drone was unoccupied—an unmanned aerial vehicle that schlepps and delivers fuel.

The drone, the MQ-25, is also known as the Stingray. Made by Boeing, it’s 51 feet long and 75 feet wide when its wings are spread out. To fit more cozily on an aircraft carrier, the wings can fold up, taking its width down to 31 feet. Boeing will eventually make seven of them.

[Related: This drone will refuel Naval fighter jets by 2024]

The Stingray’s mission is to be able to take off and land from an aircraft carrier and refuel the manned Super Hornets as needed. Currently, the Navy uses other Super Hornets to gas up their peers. Using the drone is a way to free up those F/A-18s to do other standard fighter-jet-type tasks. The Stingray had flown 25 times before the trip shown in this video, but this was the first time it actually transferred fuel to another plane.

“This is our mission, an unmanned aircraft that frees our strike fighters from the tanker role, and provides the Carrier Air Wing with greater range, flexibility, and capability,” Captain Chad Reed, the Navy’s unmanned carrier aviation program manager, said in a statement on Monday.

[Related: Refueling B-52s in the sky is hard, so the Air Force is trying VR simulators]

In the video below of the Navy’s Stingray, look for the moment around the 19-second mark, when the fighter jet connects with the red and grey drone via the hose and drogue. You’ll hear “contact” and “fuel transfer” in the audio (and plenty of cheesy music). According to Boeing, that’s the first time the drone transferred fuel to the other aircraft, which is also known as a wet contact; 300 pounds of fuel flowed from the drone to the fighter jet.

All told, this flight involved four contacts between the drone’s hose and the fighter jet. The first was a dry contact, as planned, in which no fuel flowed; the second was the first wet contact; the third was another dry one. Finally, the fourth contact was another wet one. It involved a small transfer of fuel—about 25 pounds—at a higher altitude of 15,000 feet. All told, some 325 pounds of fuel flowed from the drone to the Super Hornet. You can see a longer video of the process here.

Attached to a pylon under the Stingray’s wing, you can glimpse a pod called the aerial refueling store. That container is where the hose, basket, and fuel come from. On this flight, the drone was carrying some 500 pounds of fuel in that store. Future versions of the drone will be able to transfer additional fuel from an internal fuel system outwards through the pod, but in this case with the prototype, the aerial refueling store was an isolated fuel tank, not connected to the rest of the drone’s fuel system, according to Boeing.

They make it look easy. Watch for yourself: