Drones could help save soldiers’ lives by delivering blood on demand

British commandos tested out a drone swarm as a blood-delivery system in a recent exercise. 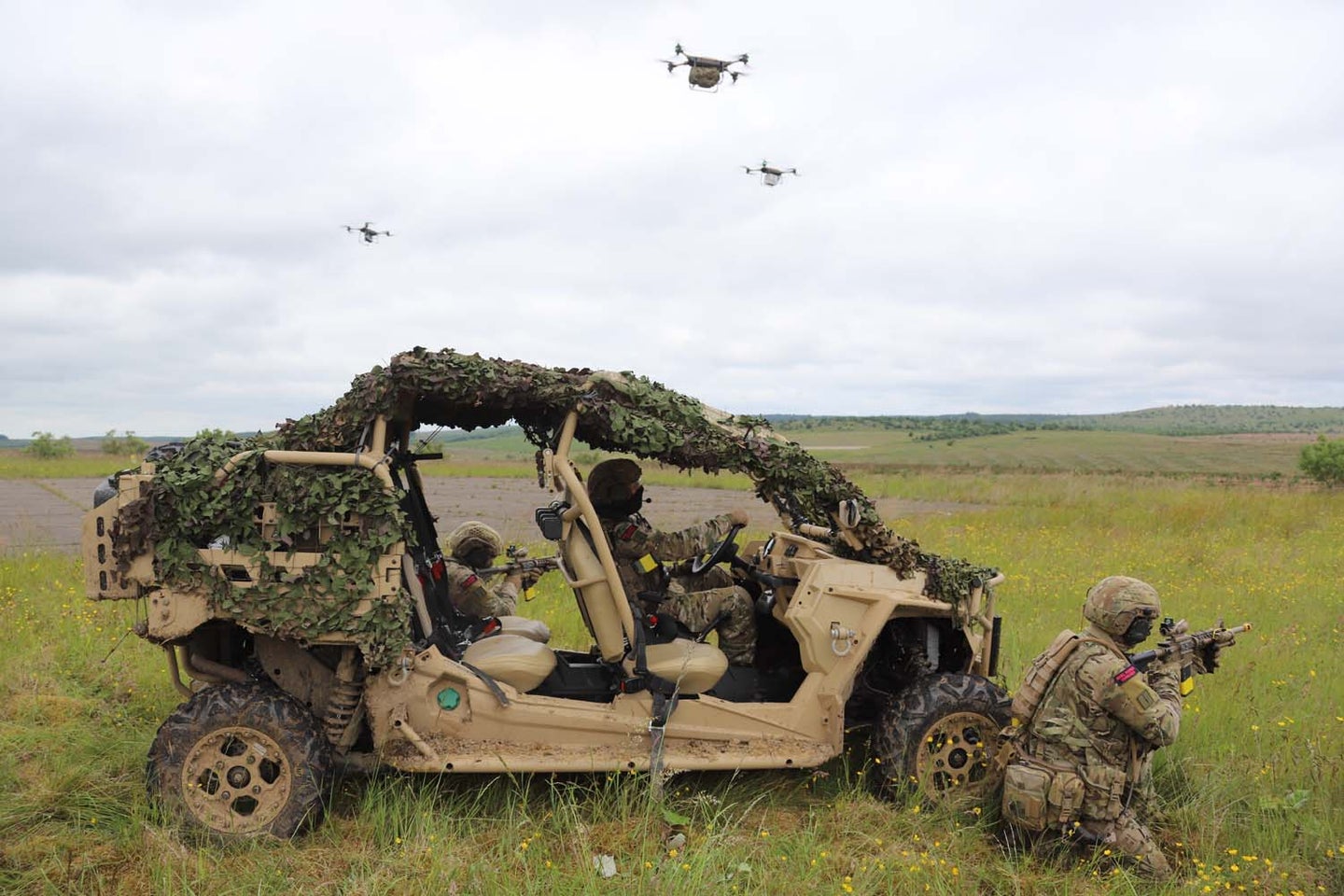 The Royal Marines worked with drone swarms in an exercise. Ministry of Defence
SHARE

Blood is usually a finite quality on a battlefield. Battles can cause a number of injuries, from the minor to the critical. If a soldier can get the wound closed in time, they can staunch the loss, but keeping the patient alive may require an influx of new blood. As medics work to aid their comrades, they could receive help from an unusual source: delivery drones, bringing literal fresh blood to the battlefield.

A drone swarm capable of delivering blood was part of Autonomous Advance Force 4.0, an exercise by the United Kingdom’s armed forces in which Royal Marines Commandos trained with modern technology for future war. The early July exercise took place in Cumbria and Dorset, with a release announced July 17.

The swarm consisted of six medium-heavy lift drones, Malloy Aeronautics TRV-150s. The TRV-150 can carry up to 140 lbs, at a range of up to 43 miles, with a maximum flight time of 36 minutes. Malloy drones got their start back in 2014 as a hoverbike concept, which was then proposed for the US military as a kind of ridden-drone scout. The US Army explored a large version of the drone as a “tactical resupply” vehicle in 2017. In TRV-150 form, the drone is an octocopter, with two rotors on each of four limbs.

In testing with the Royal Marines, the drone swarm was “tasked with tactically re-supplying commandos with everything from ammunition for the assaulting troops, through to blood for combat medics.” (The Royal Navy notes via email to PopSci that they used a mix meant to simulate blood, and not actual blood, in the training exercise.)

Tactical resupply is a difficult task. The vehicle or drone has to get to where it is needed, with a small but useful payload. Ammunition is a perfect payload, as it’s used up in fighting and having more can be the difference between a position safely held and having to make a dangerous retreat.

Blood, too, is a cargo well suited to drone delivery. Spare blood is not a standard part of an infantry kit, and for good reason. The default approach is to staunch bleeding on the battlefield, and then do serious medical work once the injured soldier can be evacuated.

Yet there are some situations where flying in blood can become lifesaving. If the injured soldier is being tended by a medic but cannot otherwise get to safety, and perhaps stabilized in a held and occupied house, then getting medical supplies to where the injury is can be vital work. Researchers first successfully demonstrated blood transport by drone in 2015, and since then have only improved on the process.

Delivering supplies by drone means shifting the risk from humans, who could suffer injury in the action, to robots that can be replaced and will not need rescue if they go down. That allows more combatants to focus on the fight at hand.

Another way to save that battlefield labor is by having the drones operate in a swarm. Traditionally, uninhabited robot vehicles are remotely piloted, or crewed at a distance, allowing the flying to be a kind of remote work. With a swarm, one human operator can guide several flying robots, all of which communicate to each other and adjust flight paths to reach the same destination.

[Related: Good news: It’s safe to use drones to fly blood around]

“This has been yet another enormously important step forward in Royal Navy autonomy and particularly Commando Force transformation; I have seen phenomenal progress through this series of trials over the past two years,” said Colonel Chris Haw, the officer in charge of the experiments, in a statement. He added that it’s important to keep in mind that “this tech is there to enhance commando excellence, not to replace it.”

In this particular instance, the commandos were able to summon the drones from a chest-mounted tablet. Using a map function, they could drop a location for the drones, and then trust the resupply to arrive where it was pinned.

The TRV-150s also deployed Remus underwater vehicles, releasing them into the sea as part of the amphibious exercise. Using an underwater scout would allow the commandos to see if any underwater obstacles might impede their shore landing, and to bring appropriate countermeasures or route around accordingly.

In addition to the drone swarm and underwater robots, the exercise featured a human-portable loitering munition, a kind of semi-autonomous flying weapon that can receive orders from a human operator to attack a selected target. These weapons, paired with light vehicles, sensors, and other scout drones, facilitate a modern approach to coastal operations, all linked together by a shared battlefield communication network.

More work in this area is coming soon: The Ministry of Defence plans to test much of the terrestrial technology later this year with an exercise in the California desert.

This article has been updated following more information from the Royal Navy.