Seeing in the dark is all about photons, electrons, and phosphor. 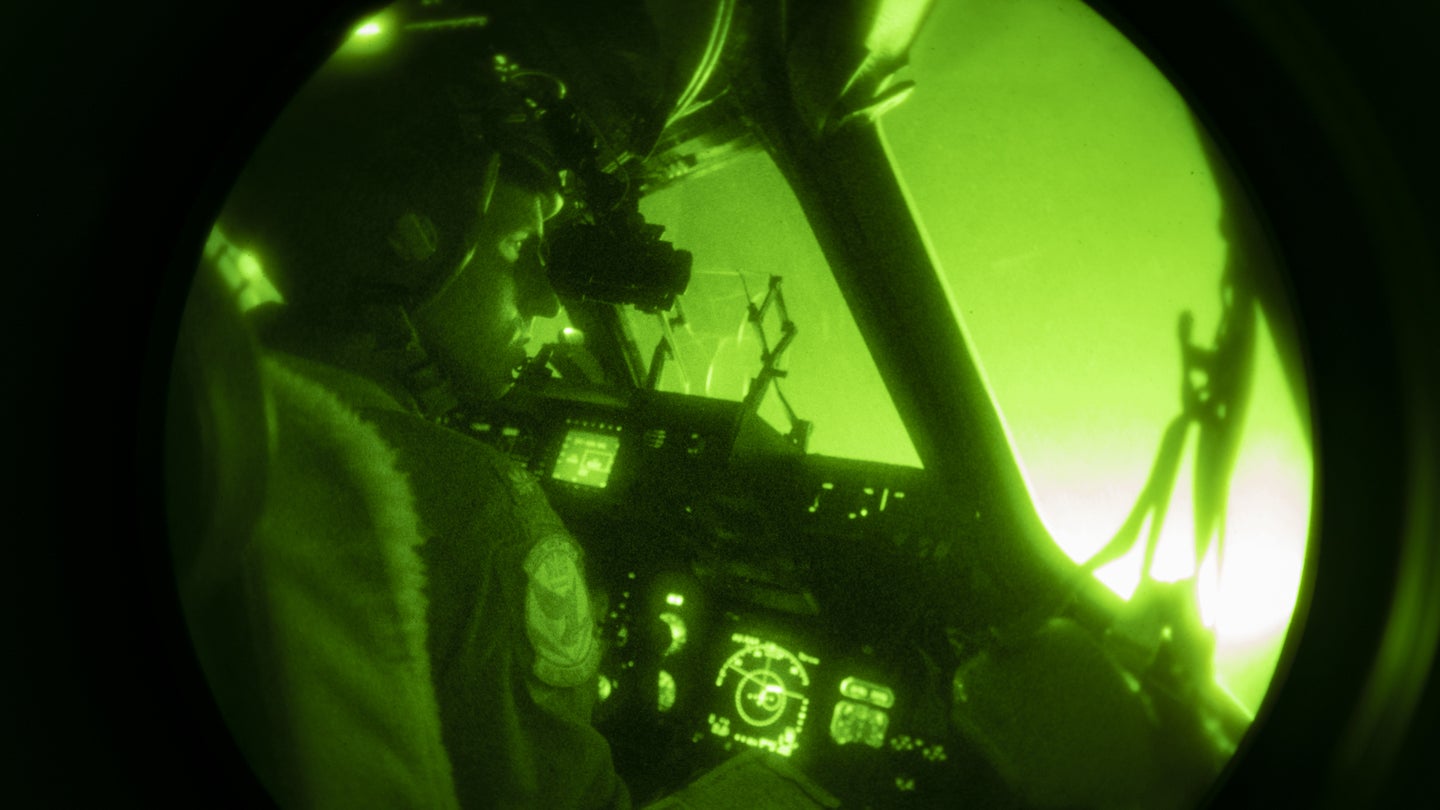 Traditionally, night vision goggles have displayed their scenes in green and black. Here, a pilot of a C-17 wears goggles in February, 2022. US Air National Guard / Mysti Bicoy
SHARE

If you want to be able to see in the dark, a good first step is to turn on the lights. That’s why cars have headlights, nocturnal hikers wear headlamps, and dog-walkers carry flashlights after the sun sets. Adding artificial light to the scene makes it knowable.

But there’s another approach to seeing in the dark that involves a piece of military gear: night vision goggles. If you’ve ever seen a green-tinted scene in the movies and wondered how this type of equipment works, here’s a look at the three-step process that takes place inside this type of device.

How does night vision work?

When the sun is out, the reason you can see an object like a tree nearby is because light is reflecting off of it and making its way to your eyes. Of course, that reflected light doesn’t exist in the same quantities at night. Put another way, there are “very few photons” after dark, observes Matthew Renzi, the senior director of engineering at L3Harris, a defense contractor that makes a night-vision device for the Army called the ENVG-B. (As a reminder, light behaves both like a wave and a particle. The fundamental particles of light are called photons.)

Imagine a single photon entering the goggles. The initial trick that the night vision device pulls off involves that incoming photon. “We convert that photon to an electron through a photocathode,” Renzi says. “That’s a specialized material that’s there to make that transition from a single photon of light into that electron.”

The next step involves boosting the signal from that electron, and for that, the device uses onboard battery power, like from an AA battery or two. “That electron multiplies significantly,” Renzi says, noting that it could be multiplied “tens of thousands” of times. While the part of the device that converted the photon to an electron is called a photocathode, this part that turns the volume up on the electron is known as the microchannel plate.

Finally, the information needs to be transferred back into the visual realm, so that whoever is looking through the goggles can see the scene. That happens thanks to a phosphor screen, which the user can see when they look through the eyepiece. “The phosphor screen is what takes that energy from those electrons and converts it back into visible light,” Renzi says.

White and black is the new green and black

That last stage is where the traditional green and black images are produced, but Renzi says that instead of green, the more modern devices today display the scene in black and white. “You might say that a green and a white are equivalent in terms of measurable performance, but the human eye perceives white and black better than it does green versus black,” he argues. The white-versus-green phosphor distinction also surfaces when it comes to night vision equipment that’s for sale.

So in brief, to make a dark scene more seeable, these gadgets take in photons, convert them to electrons, amplify those electrons, and then convert that information back to the visible again. In some cases, night vision goggles will include “an illuminator,” which actually produces a small amount of new light to brighten up the scene, he says.

Traditional night vision goggles focus on the light from both the visible and near-infrared parts of the electromagnetic spectrum, which are, along with shortwave infrared, “part of what we call the reflective bands—where you’re still looking at light that bounces off something,” he says.

Meanwhile, a different piece of gear—a thermal camera—sees a different part of the electromagnetic spectrum, which is longwave infrared; that’s emissive, as opposed to reflected light. That part of the spectrum, Renzi says, is “outside of the visuals of your traditional night-vision goggles.” A gizmo from L3 Harris called the ENVG-B actually combines both traditional night vision goggles, with their focus on the visible spectrum and the near infrared (both of which are reflected light), together with thermal sensing from the longwave infrared area that can see emissive body heat, for example.

The difference between these two types of information is imaginable in a scenario like this: “Let’s say somebody was off in the distance and behind some leaves,” he says. “You would likely pick up that heat with the long-wave infrared, [which] might have been more difficult with [just] the reflective band—but you might not know much about it at that point—you would just see that there’s some heat there.”

Ultimately, he says that the technology that allows people to see in the dark has evolved over the decades. Older systems with a “passive imaging” approach needed “a full-moon scenario or some sort of ambient light,” he says. Today, night vision goggles can “use starlight.”