Cities are failing cyclists. Here’s what needs to change.

Bike lanes are just the beginning. 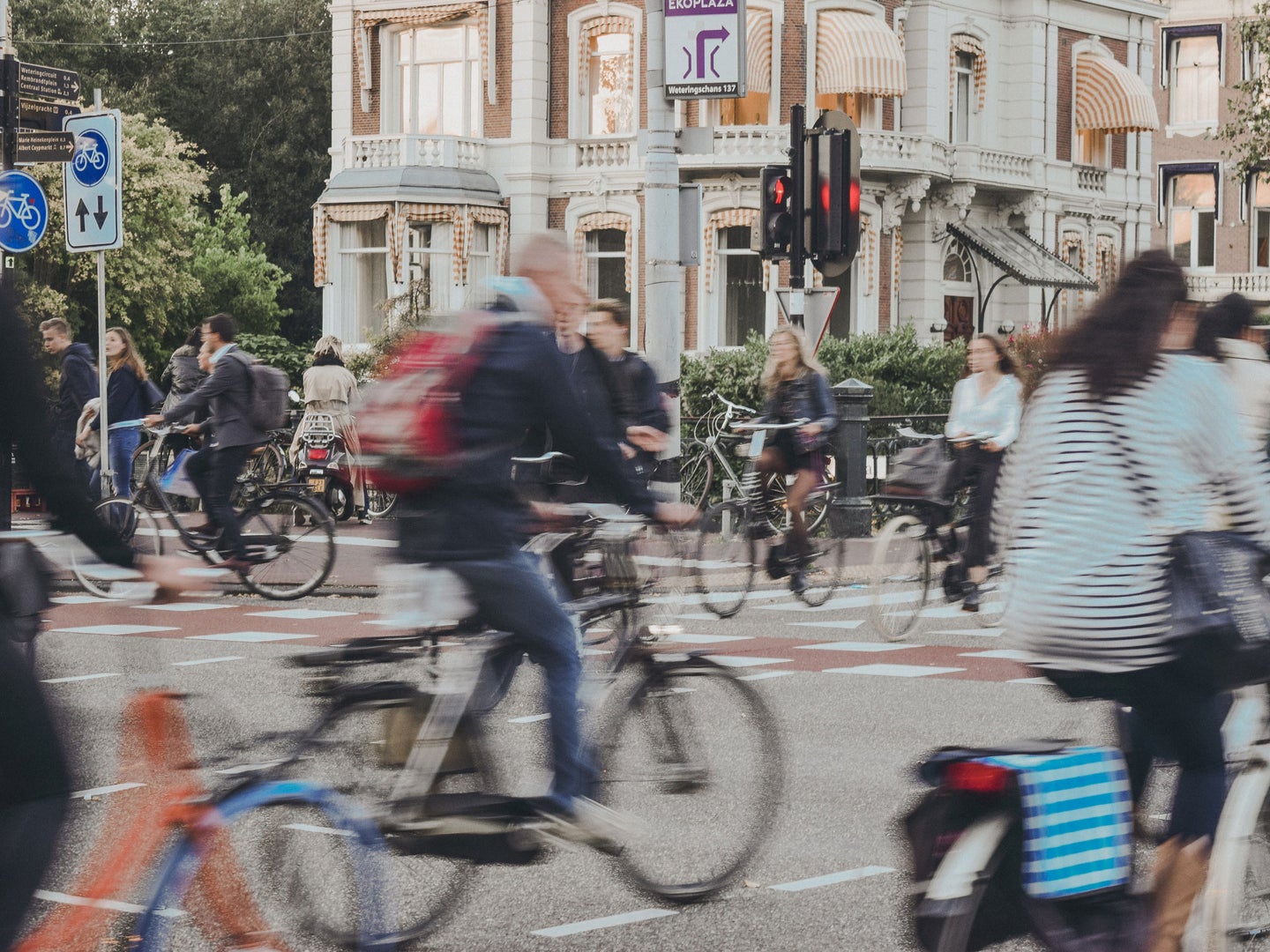 Roads can take up as much as one-third of land mass in some metro areas. During COVID-19 quarantine, these giant swaths of cities laid empty and largely unused. Those who did venture out—many to either to work in essential services or to access them—faced tough decisions about their mode of transit. Some risked the enclosed spaces of public transit or shelled out for ride-shares. In increasing numbers, though, Americans have hopped on bikes and headed out into the streets, whether their city’s infrastructure was prepared or not.

During the week of June 24, transportation monitoring service EcoCounter logged a 28-percent year-over-year increase in US bike ridership. Similarly, a May 2020 survey conducted by advocacy group People For Bikes of 11 major metro areas found that 55.8 percent of respondents were either changing their primary mode of transportation or halting their commutes altogether due to COVID-19. Nearly half of those polled also said they’re biking for exercise and recreation more. And of all respondents, 40.5 percent said they will bike or walk more often even after pandemic restrictions and considerations lift. Sales of both new and used velocipes also saw massive spikes in mid-to-late May.

Transit experts agree, however, that US cities are ill-equipped to handle this monumental surge in two-wheeled traffic. “I would say they are fine to terrible,” says Danny Harris, executive director of Transportation Alternatives, a nonprofit focused on helping communities shift away from car-based transit. In People For Bikes’s annual ranking of the best cities for cyclists, the top US town, San Louis Obibso, Calif., scored only a 3.5/5 for its velo-friendliness. The ratings consider five criteria: total ridership, safety, the strength of the road-and-trail networks, how well the systems reach diverse communities, and how quickly the municipality is enacting change.

The key factor in improving scores across the US is in investing in better bike networks—protected lanes, greenways, secure parking, and shared streets—says Kyle Wagenschutz, People For Bikes’s head of local innovation. “If you travel to any US city and you hop on a bike, more often than not you won’t easily be able to find the bicycle lanes and trails that connect you to the places you want to go,” he says. “If you got a rental car and plugged stuff into Google Maps, there’s a very seamless experience for you as a rider in that car.”

Improving the infrastructure has the potential to boost bikeability on all other metrics, specifically safety, ridership, and diverse reach. “Most US cities are scoring below the benchmark for network,” Wagenschutz says, “and we don’t think that cities can sustainably or substantially improve those other scores without that investment.”

In towns that are poster-children for pedal-powered infrastructure—like Bogota, Columbia, and Copenhagen, Denmark—cycling is part of a larger mindset. “It’s an entire way of thinking,” says TransAlt’s Harris, “you prioritize the residents, especially the most vulnerable ones.” Consider that, in spite of a general increase in bike-friendly infrastructure, 2018 (the last year for which the US Department of Transportation has compiled data) was the deadliest year on record for pedestrians and cyclists.

Spurred by COVID-19 and residents’ apprehension about the health risks inherent in mass transit, many cities implemented programs to clear more roadways for cyclists and pedestrians. Oakland, Calif., for example, rolled out a slow-streets program, which shut 74 miles of roads throughout the city. And New York City announced an initiative that would shut some 30 miles to traffic.

Yet critics say these efforts are only temporary measures, lacking the careful planning and community engagement that large-scale, long-term change demands. In many instances these open areas cluster in residential neighborhoods and don’t connect to a broader network that helps commuters get where they need to go. Transiting from a housing development at the edge of an urban area to a central business district, for example, might require a cyclist to negotiate heavily-trafficked expressways and crossings dominated by cars and trucks.

Without the safety and access to a connected network at the forefront, encouraging more pedalers onto the streets can be a disingenuous invitation. “There are still opportunities to turn these open-streets movements into something that could work for more people,” says Destiny Thomas, an urban planner and CEO and founder of The Thrivance Group, an organization that advocates for equitably reshaping the built environment to better serve Black and indigenous communities. “Black people have to travel for very far distances because of divestment in our communities,” she continues. “I’m not opposed to the repurposed space during this season, it’s how lazy we’ve been in identifying who these places are being restored for.”

To their credit, a handful of cities are taking a mindful approach to how they roll out open-street programs. Atlanta, Georgia, Thomas points out, has prioritized equity in its network planning, and even offered residents the chance to submit proposals and vote on how to spend transportation funds. And People For Bike’s Wagenschutz cites a plan in Austin, Texas, to dedicate two lanes of the South Congress Avenue thoroughfare to the center of the city to cyclists. (Across the pond, Paris and London have begun aggressively and broadly converting streets for bike-only traffic.)

In the near-term, these changes require relatively simple tweaks, such as the installation of tall white poles that divide cars from bike traffic or the placement of heavy modular barriers. But going forward, planners agree that investment in new infrastructure projects, like protected bike lanes, that will serve residents for decades to come requires thought and diligence. “We’ve got to be willing to revise what we’ve done,” Thomas says.

Bike-forward thinking should be broad, touching on all considerations that might keep a potential rider from hopping on. Questions of safety, space, and storage loom large for cyclists—both beginner and experienced. “The mission for cities who are looking to expand bicycling as an option is to focus on making bicycling an easy choice to make,” says Wagenschutz.