There will be #NoDAPL at Lake Oahe. What now?

The future of the Dakota Access Pipeline is unclear 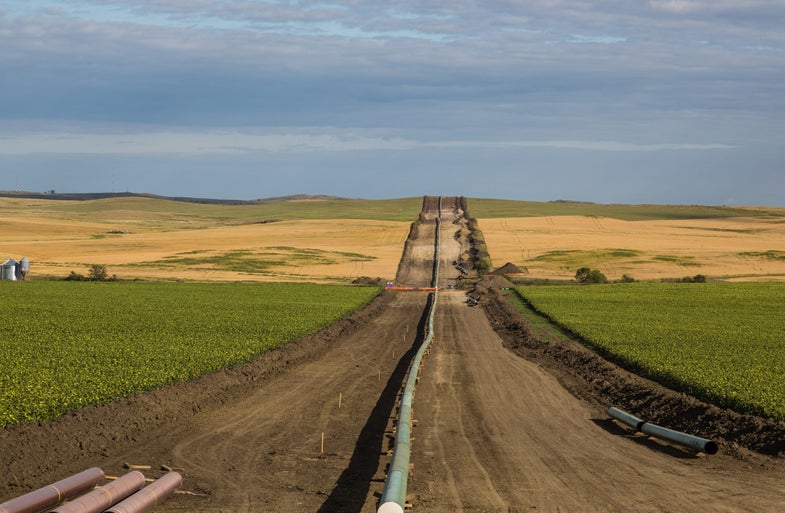 The Dakota Access Pipeline is almost complete, but the last section will likely take a lot of time to complete with the new Army Corps ruling. Tony Webster/Flickr
SHARE

On Sunday, the Department of the Army announced that they would not be granting an easement under Lake Oahe, halting the construction of the Dakota Access Pipeline (DAPL) a 1,172 mile-long pipeline that is intended to connect the Bakken oil fields in North Dakota to a storage and transfer facility in Illinois.

It was a huge victory for protesters there, who had maintained a camp for months as temperatures dropped and heavy snow arrived.

“It’s a moment that will be remembered for a long time. Voices that were marginalized were heard and they were heeded,” says Sharon Buccino, Director of the Land & Wildlife Program at the Natural Resources Defense Council.

The decision not to grant the easement means that one of the last sections of the (mostly-complete) pipeline cannot be built under Lake Oahe, a dammed stretch of the Missouri river that falls under the jurisdiction of the Army Corps of Engineers. Lake Oahe is the main source of drinking water for the Standing Rock Souix Reservation, who sued the Army Corps of Engineers in July to halt the pipeline. While the decision not to grant an easement addresses some of the issues raised in that case, the legal group Earthjustice, which filed the lawsuit, has said that it will wait to see how future events play out before they decide how to proceed with the case.

Some changes are already being made. In September, the Department of the Interior and the Department of the Army issued a joint statement prompted by the lawsuit and protests saying that they would focus on improving communications between tribal and federal governments on public infrastructure issues like the pipeline.

The current plan for this particular project is for an Environmental Impact Statement to be developed exploring alternative routes for the pipeline, including a route that passes 10 miles north of North Dakota’s capitol of Bismarck. That route was rejected from earlier considerations due to concerns that a leak of the pipeline there might impact the city’s drinking water. For now, the pipeline will sit unfinished. The sections of pipe to the north and south of Lake Oahe are almost complete, so options for re-routing the pipeline are more limited now than they were before construction began.

“Although we have had continuing discussion and exchanges of new information with the Standing Rock Sioux and Dakota Access, it’s clear that there’s more work to do,” Jo-Ellen Darcy, the Army’s Assistant Secretary for Civil Works said in a statement. “The best way to complete that work responsibly and expeditiously is to explore alternate routes for the pipeline crossing.”

The process of drawing up an Environmental Impact Statement is a long one, and involves assessing all potential environmental impacts of a particular project — in this case, the construction of the pipeline under Lake Oahe, and the the potential for future leaks. “It is a process that’s going to be involved and take some time. I would not think that it could be done in a meaningful way in less than a year,” Buccino says.

Other Environmental Impact Statements prepared for the US Army Corps of Engineers took anywhere from several months to several years to be completed.

There is a large concern among protesters and advocates that the incoming administration will take a different view of the situation, and may try to find a way to push construction forward again. Protesters are still deciding on how to proceed. Standing Rock leaders are telling people to head home, but some protesters vow to stay through the bitter winter as distrust lingers and unproven rumors swirl that the construction is continuing despite the denial of the easement.

President-elect Donald Trump has publicly supported the pipeline and at one time owned stock in the company building it.. His team has said that he will review the decision after he takes office.

The company itself has no plans of backing down. In a blistering statement released by Energy Transfer Partners, the company argued that the recent Army decision was politically motivated, and maintained that they would continue to push for the completion of construction. “As stated all along, ETP [Energy Transfer Partners] and SXL [Sunoco Logistics Partners] are fully committed to ensuring that this vital project is brought to completion and fully expect to complete construction of the pipeline without any additional rerouting in and around Lake Oahe. Nothing this Administration has done today changes that in any way,” the statement reads.

Could the next administration change things dramatically?

“The Trump administration could come in and say pretty quickly, that analysis had already been done was sufficient and therefore they were going to grant the easement” Buccino says. “But then, the consequences are on them for moving forward.”

The protests that brought about the current decision were led by the Standing Rock Souix and other indigenous peoples, but were eventually joined by environmentalists, celebrities, and veterans. Depending on the circumstances, if Trump reversed the Army Corps decision, these groups would likely come back in full force. Then there are the legal consequences: Earthjustice has already issued a statement saying that “reversing this decision would be arbitrary, capricious and unlawful, and we would challenge it in court.”

“The President-elect has said he wanted to bring America together, and reversing this decision early in his administration is the opposite of that,“ Buccino says.