This 1.9-ton steel arm can spot bombs and lift soldiers out of harm’s way

The appendage is 33 feet long and a new part of the German Army’s IED identification system. 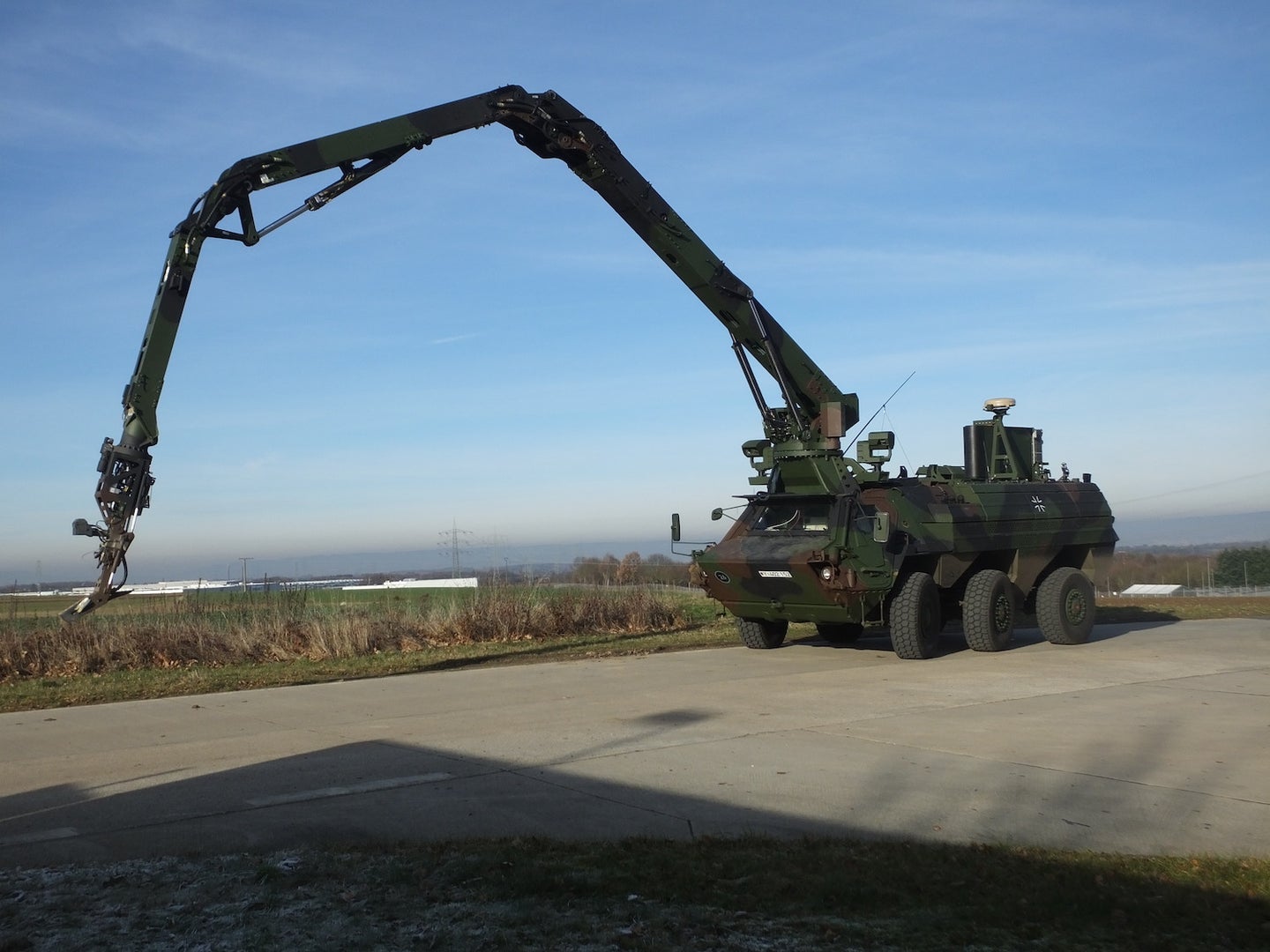 The KAI is the newest tool at the disposal of the German Army—it’s a vehicle with a 33-foot long, multi-jointed, 1.9-ton steel arm. The burly appendage is designed to detect and identify unexploded ordnance from a safe distance. It has sufficient dexterity so that a soldier could use it, and the sensors and tools at its end, to check out what could be a bomb under a bridge or elsewhere, hopefully without exploding it.

The unabbreviated German name of the system is almost as long as the arm itself: Kampfmittelaufklärung und-identifizierung, which stands for “ordnance reconnaissance and identification.” It’s known simply as KAI.

The long arm is carried atop the latest variant of a 30-year-old armored transport vehicle called the Fuchs 1A8 (“fuchs” is “fox,” in German). The 23-ton vehicle itself is well protected from mine and improvised explosive device (IED) blasts and can hit speeds as fast as 50 miles per hour.

It will take about six weeks for soldiers in the Bundeswehr, or German Army, to learn to use this new tool made by Rheinmetall, a German defense company that manufactures weapons, ammunition, vehicles, and electronics. Folded away accordion-like on top of the vehicle, the arm has three joints and can be swung 360 degrees around the truck. But “the normal position is for the arm to extend to the front of the vehicle,” Ilja Kembel, the KAI project manager, tells PopSci in a phone interview.

Rheinmetall describes it in a statement as representing “a quantum leap in the German military’s ability to detect and identify unexploded ordnance and similar battlefield hazards.”

A human operator controls the arm from inside the vehicle so that nobody has to take the risk of approaching a danger zone on foot. Five cameras along the arm and on the vehicle itself are the operator’s eyes. The sixth, and biggest, camera is at the end of the arm to detect potential booby traps. The camera is mounted on a tilt-and-pan head so that the operator can carefully turn it in hard-to-view places: inside a drainpipe, underneath bridges, or over walls. Some of these places are dark and dirty so the lens of this reconnaissance camera can be kept clean with a wiping-and-washing system: a sort of miniature windscreen wiper “so that it can be used in all conditions,” Kembel says.

The arm is very strong: It can carry an 882-pound load. “We designed it this way so that it can be used as a human rescue tool,” Kembel explains. “If a soldier has been wounded crossing a field or a road that has been booby-trapped with mines and/or IEDs, then obviously nobody else can walk across there to get to them. So with KAI we can attach straps and a stretcher if necessary to the end of the arm and then lower a rescuer over the injured person who can be lifted out of harm’s way without the rescuer ever having to set foot on the ground.”

The operator uses the camera to detect surface IEDs, but for those that are buried, another major tool fitted to the arm comes into play: a dual sensor that measures 2.6 feet across and combines a ground-penetrating radar with a metal detector. That radar is vital, because a metal detector on its own is not sufficient to find a mine or a bomb because the explosive material can be contained in plastic or other non-metallic covers. It scans the ground and the signals it sends back to the vehicle are interpreted by the operators trained to recognize the difference between a natural object, such as a stone, from something that is clearly not natural, such as a bomb.

This sensor, in a much larger, nearly 8-foot-wide version, was already a key part of the Bundeswehr’s Route Clearance System, which Rheinmetall supplied in 2011. Each system currently consists of five vehicles, including two remotely controlled Wiesel tracked vehicles—which each sport that large sensor in front—to detect and clear the booby traps.

Once a buried booby trap has been detected, a water-air spade system comes into play. The water rotates out at a pressure of 5,801 pounds per square inch, which is about five times the pressure that comes out of the hose at a car wash. That pressure is enough to clear all the earth from around a buried mine. “We’re not allowed to reveal how deep it can go,” Kembel remarked, but ideally someone in a hurry to bury a mine isn’t going to dig down too far.

There’s also a ripper chisel which can scratch and scrape at the ground to uncover suspicious objects that can’t be clearly identified.

The KAI arm is not designed to dismantle a bomb or mine. But it will, with the human operator’s guidance, identify the type of explosive and use its laser range finder to mark its precise location with GPS coordinates on a map or with an optical marking device. The bomb-disposal specialists will then know exactly where they have to act. And if it explodes by accident—that’s why the arm is so long, and the truck it’s attached to is armored.