The Next Generation of Night-Vision Goggles 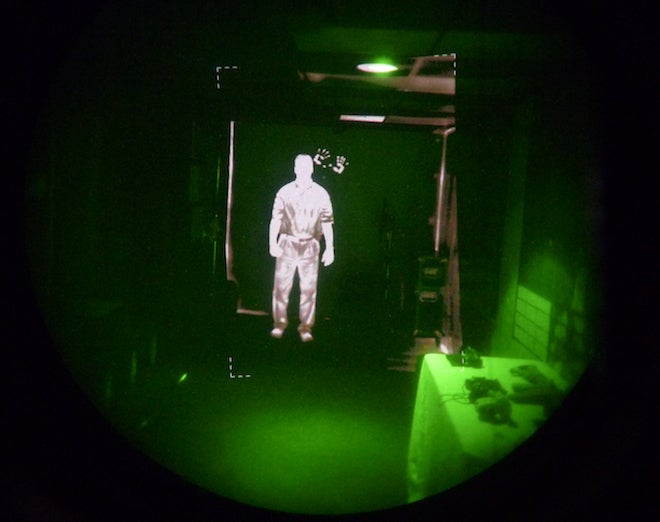 Over at Danger Room, Noah Shachtman got a look at the military’s current and next-gen night-vision goggles (or, more accurately, “goggle,” or “monogoggle,” since they only cover one eye). Hardly anyone ever gets to look at these, so to actually be able to try them out is pretty amazing. The goggles live up to the hype: they pack incredibly sensitive thermal sensors (enough so that reflections and handprints both glow) as well as embedded LCDs that transmit all kinds of data.

The current top-of-the-line goggle is known as Enhanced Night Vision Goggles: it combines the classic glowing-green image intensification (known as “i2”) with thermal sensors. The i2 is an analog technology–the military is constantly working on a digital version, but at the moment the digital version has a lag that’s unacceptable–that essentially amplifies the tiny bits of light that exist even in a “pitch-black” area. But those aren’t great for, say, spotting an enemy lying in the tall grass, and then can be rendered useless with a blinding flash of light.

So the Enhanced Night Vision Goggles include a thermal sensor that’s easily the most sensitive we’ve ever heard of. Says Shachtman: “In a specialized trailer outside the factory, ITT’s Harry Buchanan shows how sensitive the thermal sensor is. He rubs his hands on the wall, then puts them back by his side. Through the eyepiece, I can still see his handprints. Then Buchanan takes his shoes off. Not only do his feet leave similar marks; his shoes continue to glow hot.” 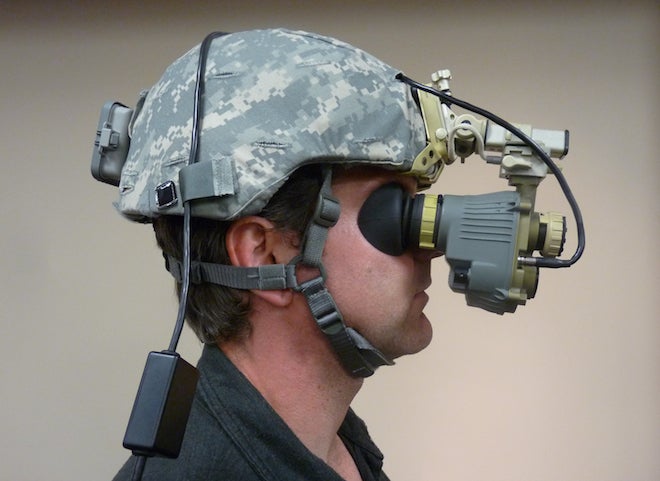 Night Vision: The Next Generation

The next version, still in alpha (and pictured above) actually shoots video and transmits it live, so a commander (or whoever) can see what the soldier sees. But it also has a built-in display, sort of like these Sony 3-D goggles, that shows just about any kind of data the soldier might need: maps, messages, locations, footage from drones or other soldiers, that kind of thing.

Read more about the goggles over at Wired.