Consumer drones are causing problems for the military 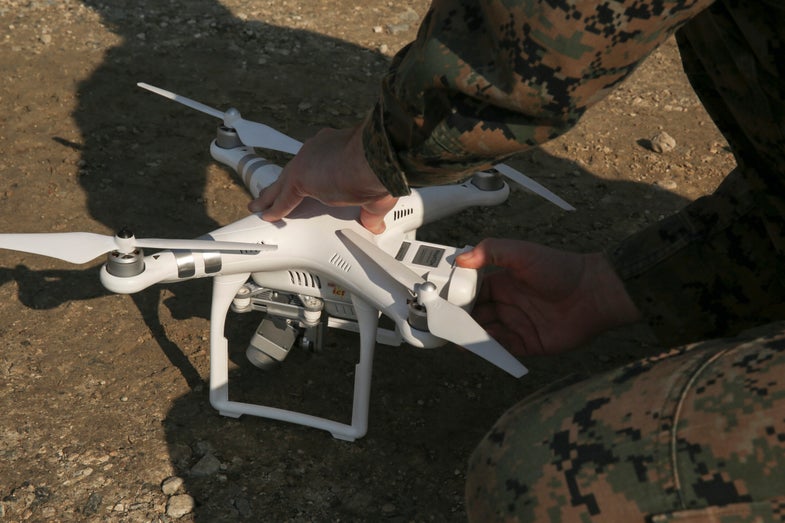 A Marine replaces a battery in the DJI Phantom 3 drone during a training exercise geared towards the development and strengthening of small unit-decision making at Camp Lejeune, N.C., Nov. 16, 2016. The Phantom 3 drone includes flight-planning and photogrammetry software which makes terrain models of an area for the battalion’s future training or field operations. The Marines that tested the new equipment are with 2nd Battalion, 6th Marine Regiment, 2nd Marine Division. (U.S. Marine Corps photo by Sgt. Kaitlyn V. Klein).
SHARE

There are over 800,000 drones registered in the United States. Of those, around 70 percent come from Chinese dronemaker DJI, whose Phantom series is essentially the Model-T of hobbyist UAVs. For the Pentagon, this poses two challenges: the ubiquity of the cheap crafts is a potential risk to base security, and also raises questions about the reliability on the drones themselves as a military tool. In response, the Pentagon announced that bases are authorized to use force to disable drones near bases, and also ordered troops to stop using drones from China’s DJI.

Side effects of the drone boom

There are, at present, 320,000 registered non-drone aircraft in the United States, according to the FAA. There are also over 800,000 registered drones, and likely many more unregistered. The risk posed by a drone as a battlefield weapon has, so far, been realized only in countries with active, armed fronts, but video from an ISIS quadcopter dropping a grenade is eye-catching in a way far deadlier weapons often aren’t. In Ukraine, an open-air stockpile exploded after an attack likely conducted by a drone with a small, powerful grenade.

The policy to shoot down or disable drones is not, exactly, new, though it is certainly getting more press at the moment. The current rules were first encoded in the 2017 NDAA, the legislation that sets defense funding every year. What is new, reports DefenseTech, is that the Pentagon is giving specific guidance for base commanders on how to handle public affairs if the base does take action against a drone. As for the specifics of how the military will disable drones, those remains vague, officially for security reasons.

The Pentagon is nothing if not equipped with an array of possible answers, though it’s highly unlikely that stealth fighters would be the weapon of choice for dealing with quadcopters. The myriad ways to shoot down a drone range from trained eagles to high-powered lasers, though only a few of these tools have actually been spotted in combat. Of those, targeted jamming and disabling devices like Battelle’s DroneDefender rifle, already seen in Iraq make the most sense. 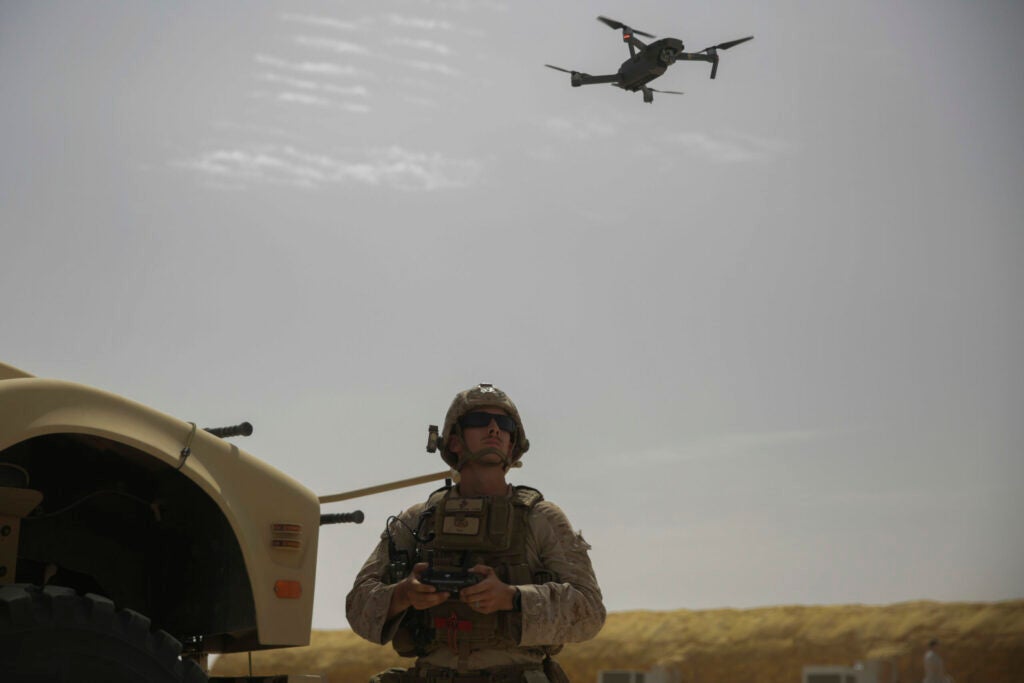 This Marine is flying the drone as a proof of concept exercise at an undisclosed location in the Middle East.

The order to stop using DJI drones came from an Army memo dated August 2nd, reports DefenseOne. The memo specifically names the risk of “cyber vulnerabilities” on the drones, which include preset restrictions on where they can fly, restrictions that can be modified or manipulated and make drones halt and crash mid-flight.

In January, the Marine Corps mentioned it was working with the Army to figure out guidelines for integrating commercial drones into the force. Ben Garrett, chief of public affairs for the Army’s Maneuver Center of Excellence, told Wired, that “The Army routinely uses off-the-shelf commercial technology, especially in material development areas such as small unmanned aerial systems.”

What are those drones? Contract solicitations show the Department of the Army looking to purchase a range of crafts. One request, dated June 6th, 2017, asks for 120 DJI Phantom 3 and 10 DJI Mavic Pros, as well as other drones by Blade, Spektrum, and Parrot. On June 30th, the Army awarded the $73,392.03 contract to DBISP of Indianapolis. In April, the Army put out a request for two “DJI Matrice 600 Pro multi-rotor unmanned aerial vehicles.” On June 10th, the Army put in a request for public affairs equipment, a request that included a DJI Mavic Pro drone. In May, the Army requested a heavy-duty police drone of a type made by RMUS, and with it several DJI-made camera accessories, though it appears that request was canceled.

One possible reason for the Army to acquire commercial drones is the value of the capabilities per cost. A DJI Phantom 3 can fly for just over 20 minutes with a maximum speed around 35 mph, and weighs just shy of 3 lbs. That puts it in broadly the same category as the AeroVironment Wasp AE, which can fly for 50 minutes, has a maximum speed of 50 mph, and weighs just shy of 3 lbs. The DJI Phantom 3 retails for around $500. In 2014, the Marine Corps awarded a contract of $21,779,408 for Wasp AE drones, of which it appears there are 143 delivered. If that’s the total purchase order, that’s a cost of about $152,000 for each drone. There is a range of differences that accompanies that steep price tag, from more secure data transmission to different sensors to greater range. Still, it’s not hard to see why, if the Army is interested in wider use of drones, it might try experiments with commercial models at a fraction of the cost.

There are some cost savings that are not worth any security trade-off, and whatever those cyber vulnerabilities of the DJI equipment may be, it appears that the Army decided the risk was untenable. This decision looks like it will mostly affect public affairs officers, though there is a chance it will matter for deployed troops, too.

What both of these decisions in combination reveal is a wicked asymmetry in drones. For the Army to use drones, it’s bound by expensive designs built to military specifications. But in the field or at bases, the military is vulnerable to modified commercial models manufactured at a fraction of the cost, and to which there is no good, clean answer.