Called the “Loyal Wingman,” the drone is designed to fly with crewed aircraft. 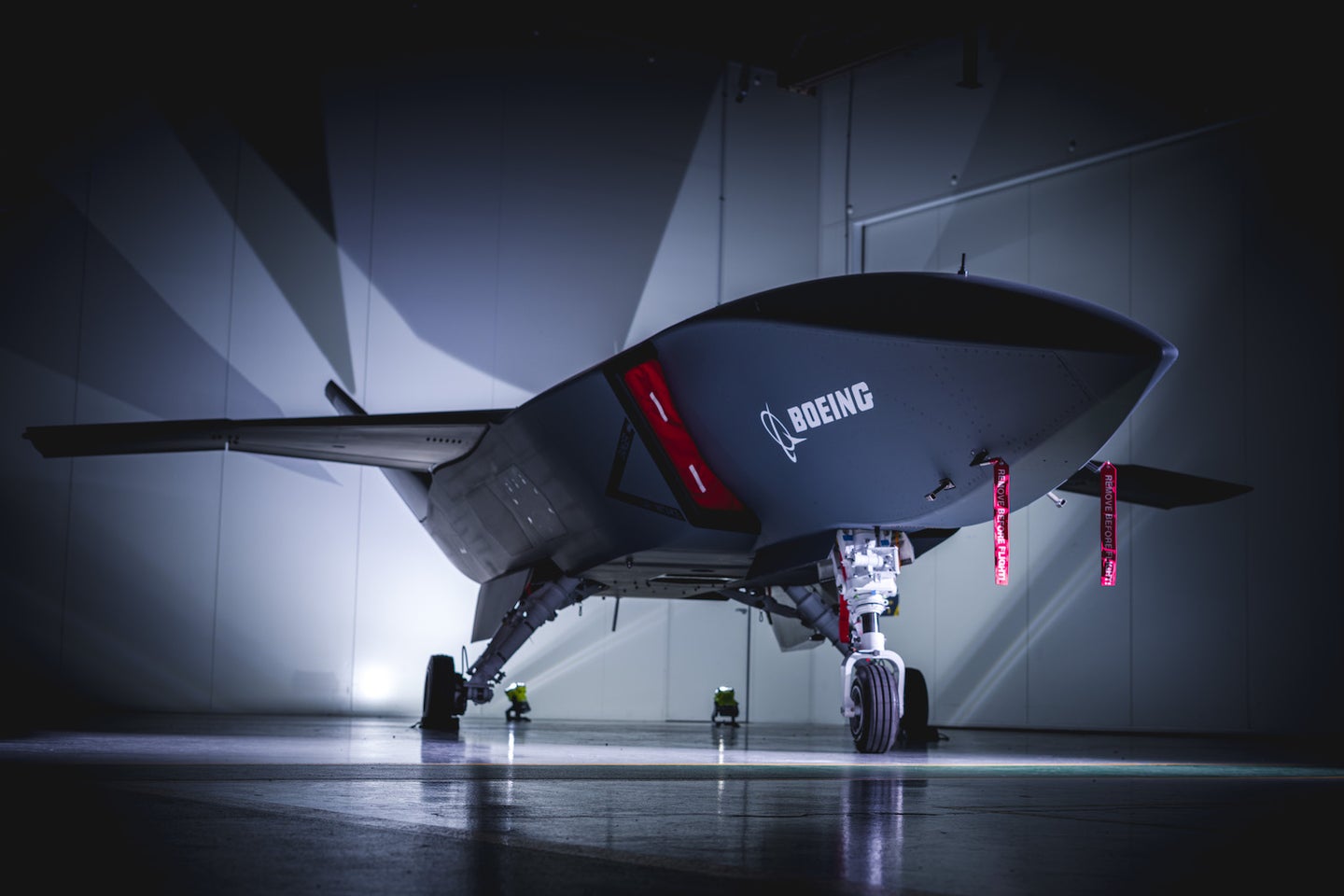 The US military’s most futuristic and problematic fighter jet is the F-35, a very expensive aircraft that costs the Air Force around $82 million a pop. Exorbitant price tags like that, and other considerations, are spurring aircraft makers and air forces to think about ways to augment the fighter jets they have—planes flown by people—with smaller aircraft that have no one on board.

The latest full-sized prototype in this category comes from Boeing, and it’s a 38 foot-long airplane with twin tails and no space for a human pilot. Essentially, it’s a fighter jet drone. But, rather than simply cruising at high altitudes and conducting surveillance like a Global Hawk, Boeing’s plane can perform much more dynamic movements. While the aerospace company isn’t revealing too many details, it does say that it will have a range of some 2,300 miles and “fighter-like performance.” The initial aircraft the company has unveiled is called a “Loyal Wingman” airplane.

“It’s designed to fly alongside, and fight alongside, other manned air power platforms, be it fighter, tankers, surveillance aircraft,” Shane Arnott, who directs Boeing’s airpower teaming system program, said in a video. The general idea with aircraft like these is that it’s preferable to sacrifice a less expensive plane with no one on board—or send that plane ahead, into a riskier situation, to gather information or do something else—than it is to lose a crewed plane like a fighter jet or a tanker.

“It is better for one of these to take a hit than for a manned platform,” Arnott said in an 2019 Reuters report when Boeing first announced the initiative and revealed a model of it.

The weirdest feature is the plane’s roughly 9-foot-long nose, which completely detaches. An air force using this plane could easily swap the nose—which has an interior volume of some 52 cubic feet—with a new for one with different equipment inside. That design choice “allows a customer to insert specific hardware and software and have that aircraft ready for a completely different mission in a short amount of time,” Arnott said in an emailed statement.

The drone has traditional tricycle-style landing gear, like many other aircraft, meaning that it’s designed to take off and land from a regular runway. That differentiates it from a very similar unmanned craft called the Valkyrie, made by Kratos. The Valkyrie, or XQ-58A, has the same general purpose as Boeing’s Loyal Wingman, but it launches from a rail, not the tarmac, and boasts a range that’s longer by about 1,000 miles. The Valkyrie may cost about $3 million each. A price tag like that may sound like a lot, but keep in mind that even a relatively basic fighter jet, like an F-16, costs about $18.8 million in 1998 dollars, according to the US Air Force.

Boeing says that the Loyal Wingman will leverage artificial intelligence to help it maneuver around the skies. After all, there’s no way that a human, busy controlling their own jet, would have the cognitive bandwidth to actively and constantly command uncrewed jets flying alongside it in formation at the same time. For that, those craft would need to be capable of autonomous flight.

The kind of code that allows for multiple drones to fly alongside another aircraft and operate with some degree of autonomy would need to be highly complex. Software called Auto-GCAS already exists that can detect if a fighter jet is going to crash into the ground—it can kick in if a pilot experiences a potentially deadly phenomenon called GLOC (g-induced loss of consciousness) and then loses control of the plane.

But the Air Force Research Lab has also been working on more complicated software that could help detect and prevent collisions in the air between planes that are flying in formation or practicing basic fighter maneuvers, when they’d turn and fly towards each other. “I would say it’s nowhere near as mature as what we’ve done with Auto-GCAS, but it is an area that we believe we need to go put some research into it,” General Arnold Bunch, who leads Air Force Materiel Command, told Popular Science in January. That’s because, he adds, “When we talk about how we’re going to do it for piloted [aircraft], you could also use similar technology in autonomous [operations], and things that would partner, so there’s even more reason to go down that path.” Indeed, that’s the path that Boeing and Kratos are going down now; Lockheed Martin, which makes the F-35, also says it’s working in this space.

Boeing is producing the planes in Australia and is working with industry in that country and the Royal Australian Air Force.

Correction: This article has been updated to fix an error regarding the volume of the aircraft’s nose. It is 52 cubic feet, not square feet.