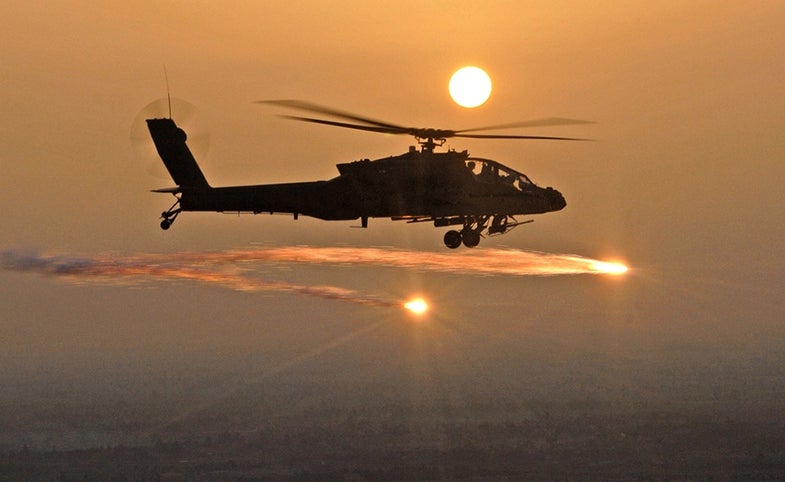 On a mission in Iraq in April 2007, four years after the war began and nine years ago now. U.S. Army, via Wikimedia Commons
SHARE

Update, June 27, 2017 Last week, Raytheon announced a successful test of a laser weapon mounted on a helicopter against an unmanned target. The test took place at White Sands Missile Range in New Mexico, with the laser mounted on an Apache AH-64 Helicopter. A targeting system kept the laser focused on the stationary target, and information from this test will inform future development of laser weapons for helicopters. Those future tests may even include helicopters firing lasers at moving targets.

When all you have is a gun and a bunch of missiles, every problem looks like something to blow up. The Army’s Apache helicopters are very good at blowing stuff up, but there are times when they need more precision. Laser-like precision, even.

Better lasers and more lasers are one way the Pentagon plans to get around the cost imbalance of its weapons. Missiles and precision bombs, released from sophisticated helicopters and planes, are effective, but they’re not cheap, and they’re single-use. The cost of a weapon may make sense against a tank, but not against a truck carrying a machine gun. Lasers are expensive to develop, but their cost of use is expected to be very low, around $1 a shot. At that price, destroying trucks and buildings with lasers suddenly makes a lot more sense than using bombs.

Lasers aren’t without their limits. Powerful ones need a lot of power, and so far the only laser deployed by the Department of Defense had a ship carrying it. The current technology shows a lot of promise, but earlier laser weapons failed. And lasers, because they are beams of light, need clear air to work. That’s hard to get when there’s smoke in the way. Or lots and lots of dust, like the kind kicked up by helicopters flying in the desert.