How to handle a pepper spray attack

Everything you need to know about a protest’s most unwanted guest. 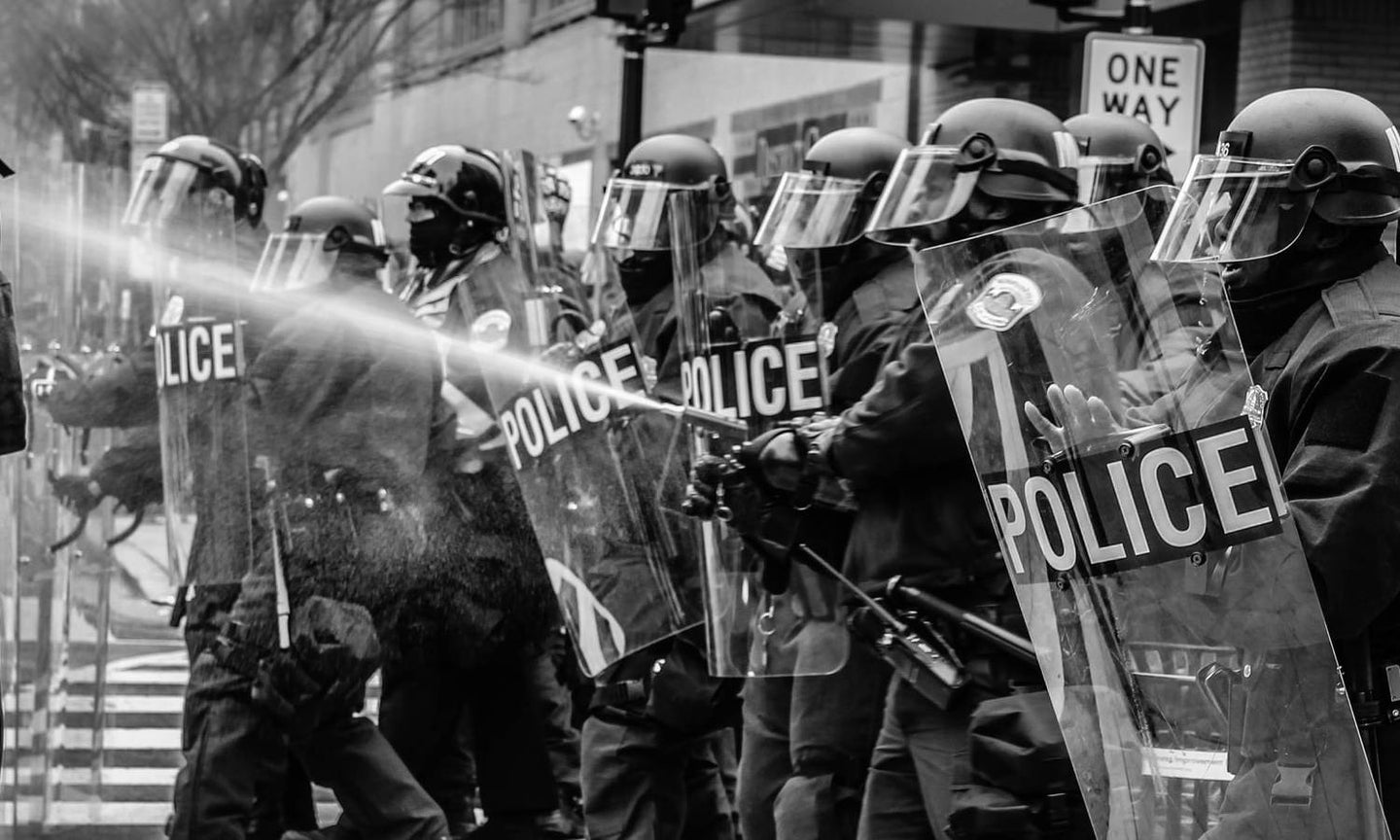 If you’ve ever accidentally touched your eyes after handling slices of jalapeño, you know the deep, searing pain that quickly follows. Now imagine that but 200 times worse. That’s what it’s like to be pepper-sprayed.

Let that sink in for a moment.

Pepper spray, along with tear gas, is one of the most common weapons in police departments’ crowd control arsenals. It was frequently used against protesters during the Occupy Wall Street movement in 2011, and it’s in the news once again as law enforcement across the country respond to the demonstrations against racism and police brutality sparked by the police killing of George Floyd.

If the jalapeño example didn’t do it for you, we’ll come right out and say it: Pepper spray is something you really don’t want on your face. This compound is much harder to clean off than tear gas, making its effects more aggressive and long-lasting. And because hotter sprays make better products, their formulations are proprietary—manufacturers don’t want you to know what’s in them.

But what we do know about pepper spray can help you understand what to do if you’re exposed and what you and your fellow protesters must do to significantly reduce pain and discomfort.

If you’ve heard this stuff referred to as “OC spray,” that’s because its active ingredient is oleoresin capsicum. This natural oily extract comes from pepper plants and it’s also likely used to make your favorite hot sauce.

How hot—and therefore, how painful—a spray is varies depending on the concentration of compounds called capsaicinoids. Depending on the plant the extract came from, this percentage can fall anywhere between 1.2 and 12.6 percent. Higher concentrations will provoke a faster inflammatory response than less-aggressive sprays.

Hotness is also measured with the Scoville heat scale, which is used to assess the spiciness of peppers used in food. Jalapeño peppers have between 2,500 and 10,000 Scoville Heat Units (SHU), while most law enforcement pepper sprays have up to 2 million. Some brands go as high as 5.3 million SHU.

In turn, how long a spray’s effects last depends on the amount of OC in its composition. In personal pepper sprays—the ones you can find in stores or online—OC concentration can be as high as 3 percent, while the maximum percentage in bear spray can’t exceed 2 percent, per federal law. The canisters police use can be up to 10 percent OC, though there have been reports of sprays reaching 30 percent.

You were pepper-sprayed: now what?

Most of the time, pepper spray is not used to control a crowd, but to deter or incapacitate a person in a one-on-one situation. The weapon’s sole purpose is to stop an attacker by inducing an almost-immediate burning sensation on their skin and in their eyes, nose, and mouth.

It’s similar to how you may feel when you’re chopping onions—your eyes immediately become irritated and you start to tear up. If you’ve been unfortunate enough to actually touch your eyes after slicing up a hot pepper, you’ve probably experienced another common pepper spray reaction—a blepharospasm.

That’s when your eyes shut tight and you have no control over your eyelids, so you can’t open them up. This is an automatic bodily response that aims to protect your eyes from whatever is irritating them, but it’s a bit counterintuitive—your eyes produce tears to wash away the irritant, so not being able to blink makes it harder to flush out. And that’s not the only problem.

“You can’t keep your eyes open, which often causes disorientation and agitation,” says Rohini Haar, an emergency physician and a research fellow at the Human Rights Center at the University of California, Berkeley.

Wearing tight swimming goggles or even big ski goggles may help protect your eyes, but recent videos from the protests against police brutality show law enforcement getting really close to demonstrators. Some officers have even pulled down protective equipment such as face masks or glasses before they spray. If this happens to you, goggles may not help, but they might redirect some of the spray or give you an extra second to duck.

Even if the spray doesn’t go directly into your nose and mouth, the agitation will make you breathe harder. This will make you inhale the spray, spreading the irritation and burning sensation into your airways and lungs. You will start to cough and your nose and mouth will produce extra saliva and mucus as your body tries to get rid of the OC. This might trigger a suffocating feeling that can lead to panic.

“The whole point is to get people to disperse,” says Harr. “But getting pepper sprayed has never caused people to calmly and safely disperse.”

Because OC spray is an oil, it’s hard to wash off and its effects last longer. The best way to eliminate it is to wash the area thoroughly with soap and water. Baby shampoo is a less-irritating alternative, says Harr. Milk has also been reported to help with symptoms, but there’s no scientific evidence to back this up. Also, oil repels milk, so dumping dairy on your face won’t help get OC spray off your skin.

If you ever get sprayed, first find help from somebody who can be your eyes and then immediately move somewhere safe where you can wash your face. Afterward, stay in an open space and wait it out—the air will help you recover. Psychologically speaking, having a particular goal or task in mind has been proven to help people fight through the effects of pepper spray despite the discomfort. Just keep thinking about the next step you need to take—to find water or get to a quieter place—and focus on that.

Sadly, once your skin, eyes, and airways are irritated, there’s not much you can do about it. Soap, fresh air, and even commercially available pepper spray relief will help prevent further contamination but won’t soothe your pain. Ingesting pepper spray affects your body differently, but you’ve still got to wait out the effects.

Rohini says she’s had to treat pepper spray victims in the ER. Those who were sprayed directly in the mouth experienced severe gastrointestinal distress, including nausea, vomiting, diarrhea, and abdominal pain that lasted hours—sometimes days. Unfortunately, there’s not much doctors can do to stop the source of those problems, she says.

It might be hard not to scream while you’re being pepper-sprayed, but you should try to keep your mouth closed as much as you can to prevent ingestion. The less OC there is in your digestive system, the better.

No matter where the spray hits you, seek medical attention if any symptoms last for more than 45 minutes or if you find the situation is unbearable even before that time.

The biggest problem with pepper spray

Much of what we don’t know about pepper spray and its effects on the human body stems from the fact that we don’t know exactly what’s in the canisters. Yes, capsicum is the active ingredient, but it’s only one of many elements that make up the sprays police use today. Depending on the brand, the pepper extract may be mixed with water, alcohol, or organic solvents like ethyl alcohol, according to a 1999 review in the North Carolina Medical Journal. Other elements, such as nitrogen or carbon dioxide, could also be present and used as spray propellants.

Unfortunately, accurate information about the OC concentration or other ingredients is rarely available on the label. This has made it difficult for scientists to analyze pepper spray and identify more severe consequences behind the immediate effects of the spray. On top of that, there’s another problem—OC spray formulations may differ a lot from brand to brand.

“Because there’s no regulation around any of this, there’s a ton of different companies both in the US and abroad that sell to US police forces,” Haar says of law enforcement pepper spray. “Everybody has their own contract and their own concentration, and there’s no standard form.”

It’s the same with how pepper spray is used. With no regulation and little public research that considers specific compositions from specific brands, it’s hard for any organization to create universal rules that guarantee the safety of the public.

In 2019, the United Nations published universal guidelines for the use of less-lethal weapons in law enforcement, which included crowd control measures such as tear gas, batons, and rubber bullets in addition to pepper spray. The document says that OC spray should only be used against a “violent assailant” or “to help effect the lawful arrest of a suspect who is resisting violently.” It also says the proper use of pepper spray includes aiming directly at the attacker “from a distance of up to several meters,” and that the user should have “sufficient toxicological information […] to confirm that [the spray] will not cause any unwarranted health problems.”

As press reports have shown, police officers in the US have bluntly disregarded these guidelines. That’s because these UN principles have little effective force, making them nothing more than recommendations.

“There’s no obligation for police forces to abide by these guidelines, and none of it has been ratified into our federal or state laws,” says Harr.

Pepper spray is no joke. Unlike tear gas, discomfort and after-exposure effects can last for days. It will certainly take you out of a protest or demonstration, and if you have any underlying respiratory or cardiovascular conditions, it may trigger more severe reactions with horrific repercussions.

When you hit the streets, all you can do is manage the variables that are in your control. Wearing tight swimming goggles will protect your eyes from both pepper spray and tear gas, and cooperating with law enforcement may de-escalate the situation. You may get sprayed anyway—it’s not always up to you.