Everything we know about which Ford electric vehicles will be able to charge each other up in a pinch. 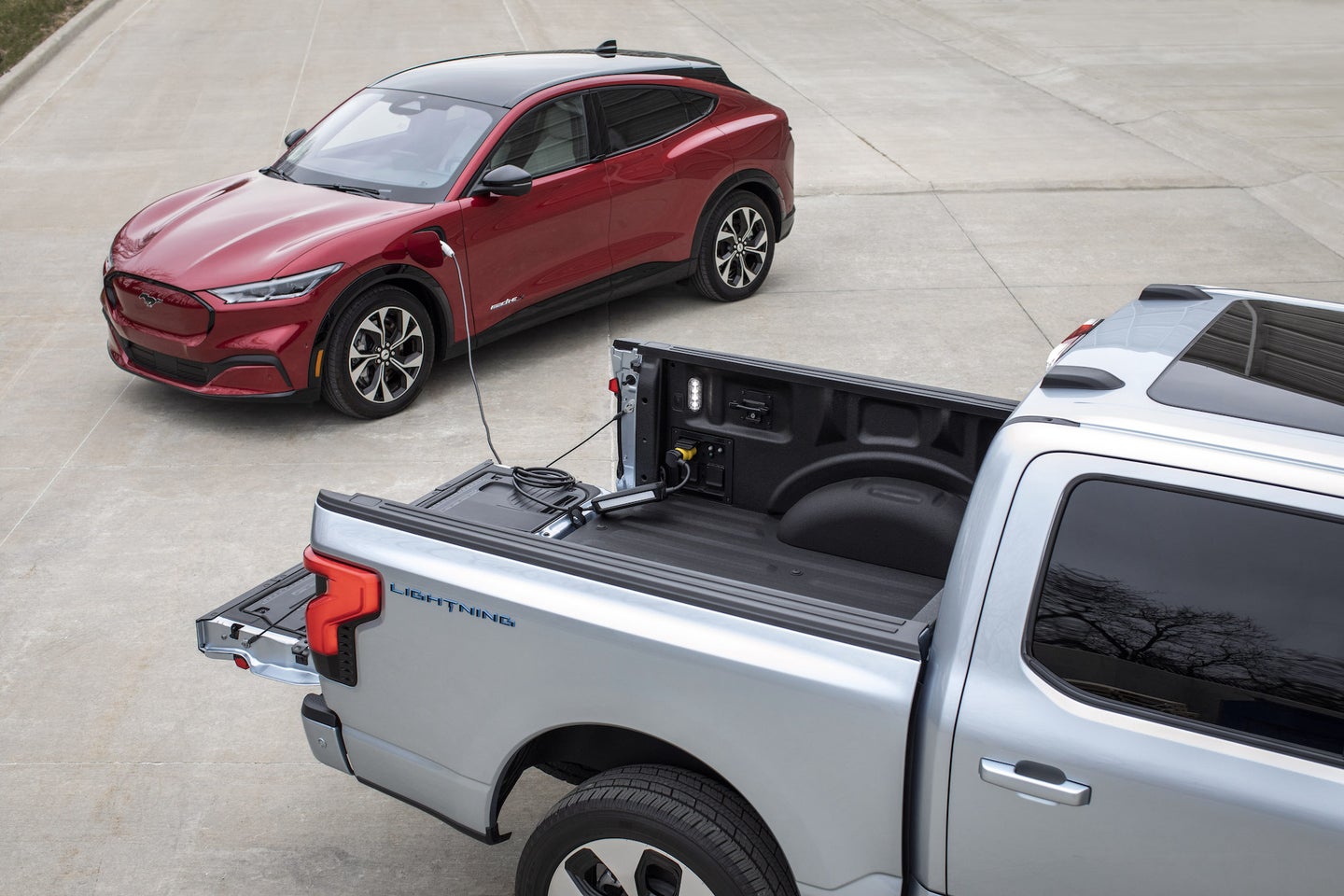 Both the new all-electric F-150 as well as the hybrid version of it will be able to charge up other EVs. Ford
SHARE

Running out of fuel in a gasoline-fueled car is an age-old tale, a problem that can usually be solved with a jerry can and a bit of leg work to the nearest service station. Electric cars are a different story, given that you can’t store enough electricity in a portable container (at least not yet), so it’s only natural that owners transitioning to the new tech could feel some range anxiety.

Ford is one of the many automakers that realized that an electric car is essentially a giant power bank on wheels. Most recently, it officially announced that its battery-powered F-150s will even be able to share its stored charge with other vehicles in Ford’s EV lineup—and beyond—that need a little boost to get to the next charging station.

It should come at no surprise that Ford had some rather utilitarian tricks up its sleeve for the all-electric 2022 Ford F-150 Lightning and its hybrid cousin. In fact, the F-150 PowerBoost Hybrid made news earlier this year when it helped to keep the lights on for Texans who were without power during a winter storm.

We already knew that Ford was planning to add some sort of vehicle-to-vehicle charging capability to the battery-powered F-150 Lightning. Speaking with The Drive in November, F-150 Lightning Chief Engineer Linda Zhang confirmed that they were working on such a feature for the automaker’s first all-electric pickup, but they didn’t officially reveal it or elaborate on its capability until last week.

Last month, Zhang had said that only the F-150 Lightning would be able to share its on-board battery’s power with another vehicle. But Ford’s new information expands this giving-others-a-charge functionality to the F-150 Hybrid, which will utilize its onboard generator to do so. Other vehicles in the Ford lineup will be able to directly benefit from this bidirectional charging. For example, Ford will support the Mustang Mach-E crossover, E-Transit van, and other F-150 Lightnings out of the gate. The automaker says that the power-hungry F-150 Lightning will gain up to 13 miles of charge per hour from another F-150 Lightning, and its E-Transit cargo van can receive enough juice to gain up to 10. This may not seem like a whole lot, but it could make all the difference in the world to vehicles stuck just a few miles from a public charging station, or those marooned in a remote location.

When outfitted with Ford’s optional Pro Power Onboard package, the F-150 Lightning can supply up to 9.6 kilowatts of power to the vehicle it is sharing a charge with. Meanwhile, the Hybrid can supply a lesser (but still impressive) 7.2 kW. According to Ford, that’s enough juice to add an average of 20 miles of range to its Mach-E electric crossover, for example, in as little as one hour.

The feature also promises to be incredibly useful for Ford’s fleet customers; they may deploy multiple electric or Hybrid F-150 vehicles at any given time, namely to power items or tools on the jobsite. Should one vehicle flatline on battery, the fleet customer could use a rescue truck to share a bit of juice rather than tow the truck to the nearest charger.

The vehicle-to-vehicle charging feature on the F-150 Lightning and Hybrid will be manufacturer-agnostic, meaning that as long as the car receiving the charge can utilize the F-150’s bed-mounted 240-volt power outlet, it will charge just as if it was plugged into any other Level 2 source. The way to do that will be to use a common L14-30P to 14-50R adapter plug along with a Ford Mobile Power Cord, and it will be possible to charge any vehicle with a J1772 charging inlet.

[Related: The everyday item behind the design of the F-150 Lightning’s frunk]

Ford isn’t alone in offering this type of feature. The new Hyundai Ioniq 5 offers bidirectional charging, though only at Level 1 speeds. Likewise, Rivian CEO RJ Scaringe confirmed that its R1T pickup and R1S SUV will have the hardware necessary for vehicle-to-vehicle and vehicle-to-home charging. Tesla’s delayed Cybertruck is also poised to have a similar function with its planned onboard 240-volt outlet, according to CEO Elon Musk.

This tech might represent a stepping stone on the way to a time when America’s charging network grows to support the number of projected EVs coming to market in the next decade, although it may also remain a standard feature on many electric cars with high-capacity batteries in the future. Perhaps sharing a charge with a neighbor in need might even one day be a good deed.