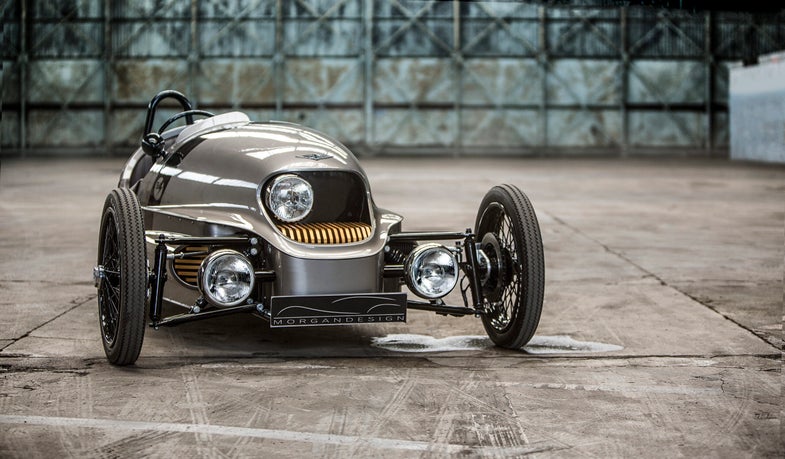 The Morgan EV3, announced at the Geneva International Motor Show, is the company’s first all-electric vehicle in more than a hundred years of building cars. The retro fantasy design is similar to the Morgan 3, which shares its three wheels and open cockpit. But where the popular petrol-powered vehicle wears its V-twin engine on its nose, the electric vehicle is a sleek bullet from the early days of science fiction.

The EV3 is no fiction, though there’s plenty of science on board. The whole car weighs about a thousand pounds, and carries a 20-kWh battery pack and a liquid-cooled 46-kW motor (that’s just a touch over 60 hp) driving the rear wheel. It’s enough to propel the EV3 to over 90 mph and from 0 to 62 mph in under 9 seconds. Okay, so it isn’t faster than a speeding bullet. But it does have a range of 150 miles.

Morgan says the EV3 will be priced “comparably” to the gasoline version, putting it in the $45,000 range. Production is expected to begin in late 2016, so we could see these on British roads in time for the weather to clear up enough for an open cockpit in 2017.

The Morgan company has been family-owned since its founding in 1909, and it takes its heritage very seriously. Its lineup of cars, including the Plus 4 and Roadster, is based on Morgan designs from decades past. The EV3, for all of its future-by-way-of-1930 looks, draws on Morgan three-wheeled racecars, which had a sharply lifted tail. It’s not all design for design’s sake—the steampunk-worthy brass cooling fins at the front of the EV3 house the batteries. The interior mixes old materials and new technology, with wood toggle switches, brass plates, aluminum surfaces, and a digital screen in the dash.

At the same time that Morgan announced the EV3 in Geneva, it also said that the company will receive government funding to develop more full EVs as well as hybrids. This could put the technology of the future under the hoods of the past.