You might not like the word "frunk," but the story behind the electric F-150's front compartment is actually pretty likable. 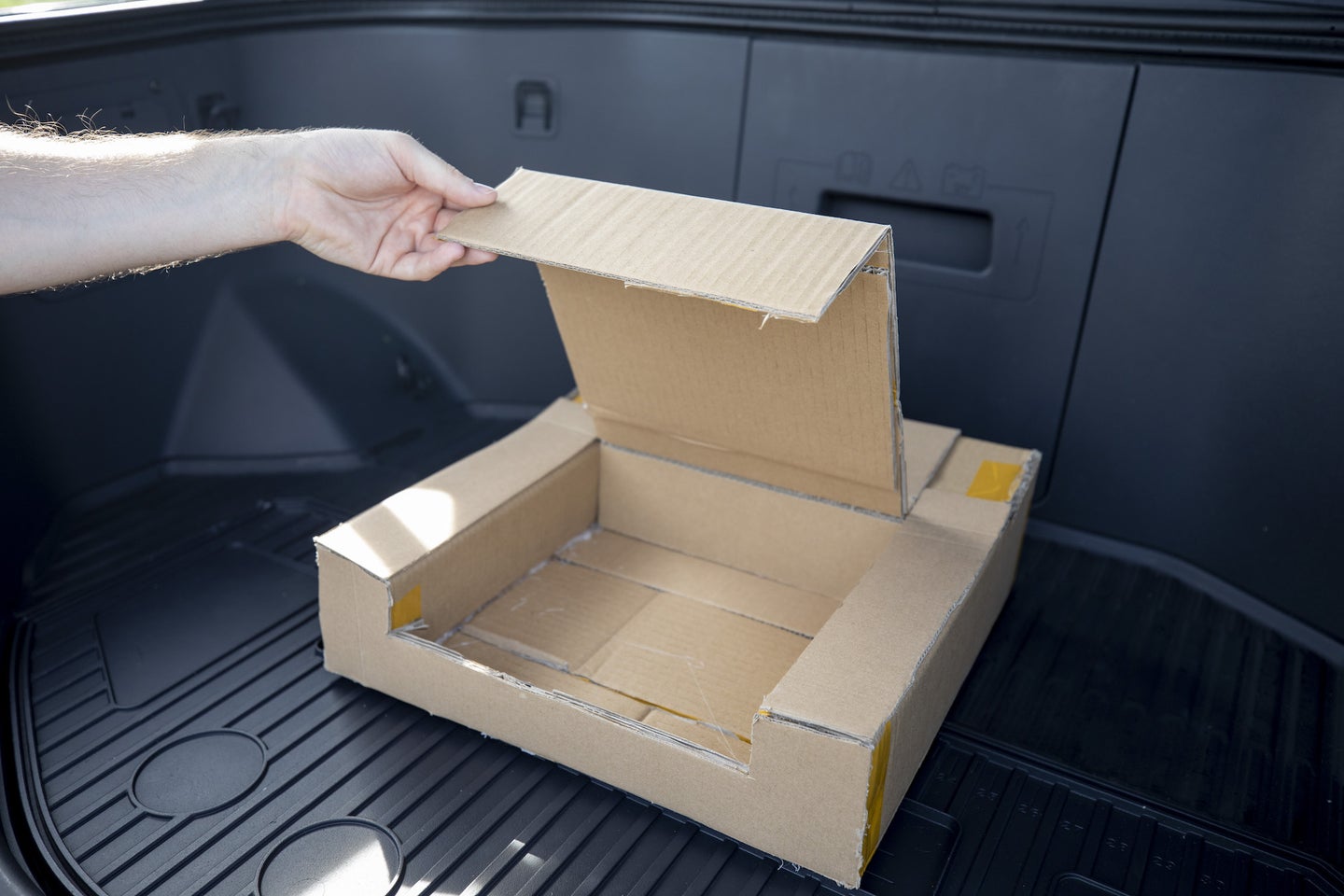 The term “frunk” is becoming increasingly popular as more electric cars hit the road. A much-mocked amalgamation of the words “front” and “trunk,” the word simply refers to the compartment where the engine is located in most traditional combustion cars—a space that has now become the key to unlocking more storage space in some modern automobiles.

When Ford greenlit an all-electric version of its F-150 pickup truck, it knew that its engineers could use this nook to add additional storage without sacrificing existing cabin or bed space. And to give form to its vision, Ford used one of the most rudimentary tools in the industry: a cardboard box.

Towards the beginning of Ford’s journey of designing a battery-powered pickup, the automaker set out on a reconnaissance mission in 2018 to determine how it could use electrification to improve the experience of truck ownership. The company knew that it would be using the newly-found frunk space as part of this task, so in a day’s time, a group of EV-centric employees (known internally as Team Edison) used an old cardboard box to sculpt a crude model of what would eventually become the F-150’s “Mega Power Frunk.”

The design team cut up the box to resemble the front end of a vehicle. They gave the cardboard model a liftable hood, an engine compartment, fenders, and a front cutout to show off the empty space where the engine would normally sit.

This cardboard model then traveled with the design arm of Team Edison to California, the state with the largest number of registered electric vehicles in the country. Ford formed focus groups consisting of existing truck owners and fleet customers to discuss what they might use such a space for—and owners instantly became excited about the possibilities.

“If you want something valuable put away and kept dry, it generally goes in your cab with you,” F-150 Lightning Chief Engineer, Linda Zhang, said in an interview with The Drive earlier this year. “And then it basically gets in the way of the space that people normally use. So this Mega Power Frunk was great because it provides that dry lockable storage that, in a way, gives our customers their cabin back.”

Ford said that its customers envisioned outfitting the Mega Power Frunk with loads of water-tight storage that they would otherwise not have access to with limited cabin space and an open bed. Some, according to Ford, pictured fitting two golf bags into the frunk. Others wanted to fill the frunk with mulch and be able to hose the space out after bringing it home. Another common demand was for the flat area of the frunk to be approximately waist-high for ease of loading and unloading.

It was clear that the Mega Power Frunk would need to be a workhorse area. Ford toiled to design the area to hold up to 400 pounds of payload, and built the frunk to house up to 14.1 cubic feet of cargo. That made it not only strong, but the largest front trunk in the entire auto industry, affording to Ford.

The name “Mega Power Frunk” sounds silly, but there’s a reason that Ford slung the words together in that order. Namely, it has to do with cramming the frunk full of cool tricks that make use of the truck’s high voltage battery. For example, there are power outlets which can provide up to 2.4-kilowatts of electricity—enough to power tools, laptops, and more—using standard home outlets. Ford also included USB chargers and work lights.

“[Our] customers kind of helped us realize [that the Lightning] is an EV,” continued Zhang. “Can we do something with power? Could we do something with the battery and get outlets in here? Or do a bigger space and make it so that you could put the TV here, or put up your flags at a tailgate?”

Speaking of tailgating, that was also a huge consideration in the trunk’s design. Customers wanted to “frunk gate” using the new tech, which meant filling the space with ice and drinks, or using the power outlets to hook up a crockpot for hot food.

The rapid shift towards electrification is a big challenge for manufacturers. The underlying combustion-based engine technology that has been the standard for over a century is now being phased out. Ford is just one of the manufacturers that have seized the opportunity to innovate in this new space with the F-150 Lightning. Sometimes, using a low-tech approach like a model built from a repurposed cardboard box can even prove to be useful in automobile design.

The 2022 Ford F-150 Lightning and its Mega Power Frunk is slated to land on dealer lots beginning in Spring 2022.