Utilitarian details like the frunk and power outlets make this an exciting new EV option for so many. 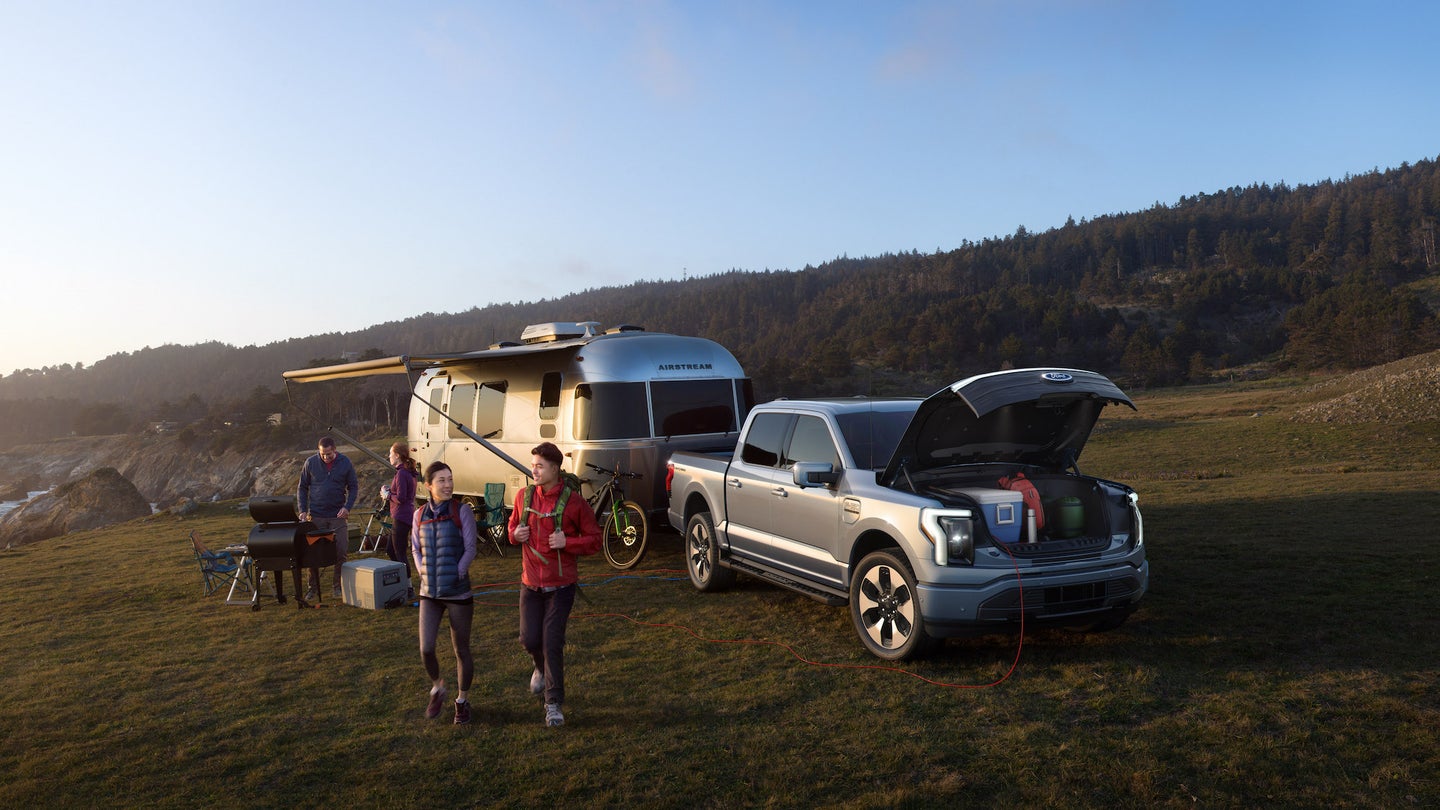 Ford’s first electric pickup truck is here—and it’s ready to prove that anybody can own a battery-powered truck without sacrificing the important features that make a vehicle like this useful in everyday life. The 2022 F-150 Lightning amps up the utilitarian nature of a pickup, adding features like a unique front trunk and vehicle-to-home charging that make the ride unlike anything else on the market.

Despite being unique, the Lightning also manages to be quite normal on the surface, which is an accomplishment on its own. Feeling like a typical pickup means it offers a seamless transition to electrification for drivers. It promises to be like a regular pickup with a whole lot of extra features.

Popping the hood of the F-150 Lightning won’t reveal Ford’s 5.0-liter V8 engine. Instead, owners will find copious amounts of cargo space. There’s no engine, of course: two inboard electric motors power a pair of wheels at either end of the truck.

What to know about the new Ford electric truck

The dual-motor powertrain produces up to 563 horsepower and 775 pound-feet of torque, making it possible for the F-150 to scoot from zero to 60 MPH in the mid-four-second range—rather close to the number that President Joe Biden gave journalists while test driving the truck during a tour at Ford’s Dearborn plant. The instantaneous all-electric torque also gives the whip the chance to live up to the Lightning name, beating out not only its similarly named grandfather, but also the modern-day Ford Raptor.

While significantly faster than the internal-combustion powered trucks, the Lightning’s range may be the biggest pain point for drivers moving over to electrification. A single charge can last drivers up to 300 miles with the extended battery, or 230 miles with the standard battery. While these numbers are pretty good for an electric vehicle, they do fall short of the convenience of filling up at the pump. The V8-equipped F-150 can reach as far as 684 miles on a single fill-up with its largest available gas tank, a reminder of the huge energy-density advantage that gasoline offers.

Still, even if range anxiety is a very big pain point for new EV owners, and the F-150 Lightning aims to put that to bed by being as transparent as possible while doing just about any bit of work. This means that if range is being depleted faster than usual because the truck is towing a trailer or has a load in the bed, its onboard computer uses sensors to determine just how much extra energy is being sapped. For example, if a driver is transporting a load of dry concrete, the truck employs a series of scales built into the bed to intelligently calculate just how much the payload weighs. It uses this data to determine the extra energy required to turn the wheels and how that affects the range. Then, it displays the adjusted figure to the driver so that the actual number more closely matches the real-world energy that will be used during the trip. In theory, this would help drivers to better calculate their routes, and result in trucks spending less time unexpectedly stopping at a charger.

Fortunately, should the need to stop and charge occur, the F-150 Lightning makes use of DC fast charging to quickly juice up a depleted battery. While charging at a 150 kilowatt station, the electric pickup can add an additional 54 miles of range in only 10 minutes, or charge from 15 to 80 percent in just over 40 minutes.

Utility is the name of the game, so expect to see some pretty great work-oriented features on the F-150.

First up is the extremely cool Mega Power Frunk—that’s Ford’s name for its power opening and closing front trunk where the engine would normally sit in a gasoline-powered truck. Instead, owners will find an extremely spacious 400 liters of water-resistant storage where they can store up to 400 lbs of payload.

The concept of a front trunk (or, “frunk”, if you will) isn’t new, of course. Other electric vehicles like the Tesla Model 3 and even the Ford Mustang Mach-E already have these, and rear-engine gasoline-powered cars like the Porsche 911 have used this design staple for decades. However, one simple change added by Ford may have perfected the frunk design as a whole. The frunk has an extreme low lift requirement for loading and unloading thanks to an open-front design. Heavy objects like toolboxes can easily be slid forward instead of being lifted up and out, making it quite easy to transport just about anything, work tools included.

And if those tools are battery powered, the four under-hood 120-volt outlets will make powering the work site easy. Additional outlets can be found inside the cab and bed, and the vehicle can supply up to 9.6 kilowatts of power at any given time. Ford says that’s enough to power an entire work crew framing a house, or even a mobile food trailer.

At the end of the day, charging the truck at home means just plugging it into one of the three Level 2 chargers available from Ford. The top-tier 80-amp charging station can fully charge the F-150 Lightning in just eight hours and also enables “Ford Intelligent Backup Power,” a feature which will seamlessly utilize the truck’s battery pack to power a house during a power outage for up to three days of normal usage. In the future, Ford says it will also enable a feature which allows the same vehicle-to-home power flow so owners can avoid paying premium electricity rates during peak hours.

The F-150 is targeted at being the electric truck for people who already own a pickup. It does this well by adding a myriad of utilitarian features while still offering decent range and significant power. Meanwhile its direct competitors are aimed at completely different markets—the Tesla Cybertruck is the pickup for non-truck people and the Rivian R1T is being touted as the ultimate adventure machine. Other similarly-targeted electric trucks, such as the upcoming releases from General Motors and EV startup Lordstown Motors, will have to perfect utility even better than the F-150 Lightning in order to hold a candle to Ford’s new pickup.

It is available for preorder today for delivery beginning in spring 2022. Prices start at an affordable $39,947, though buyers looking for more range and luxuries can inch the price of the highest-trimmed models well over $90,000.