Why not plug your TV into your electric car? 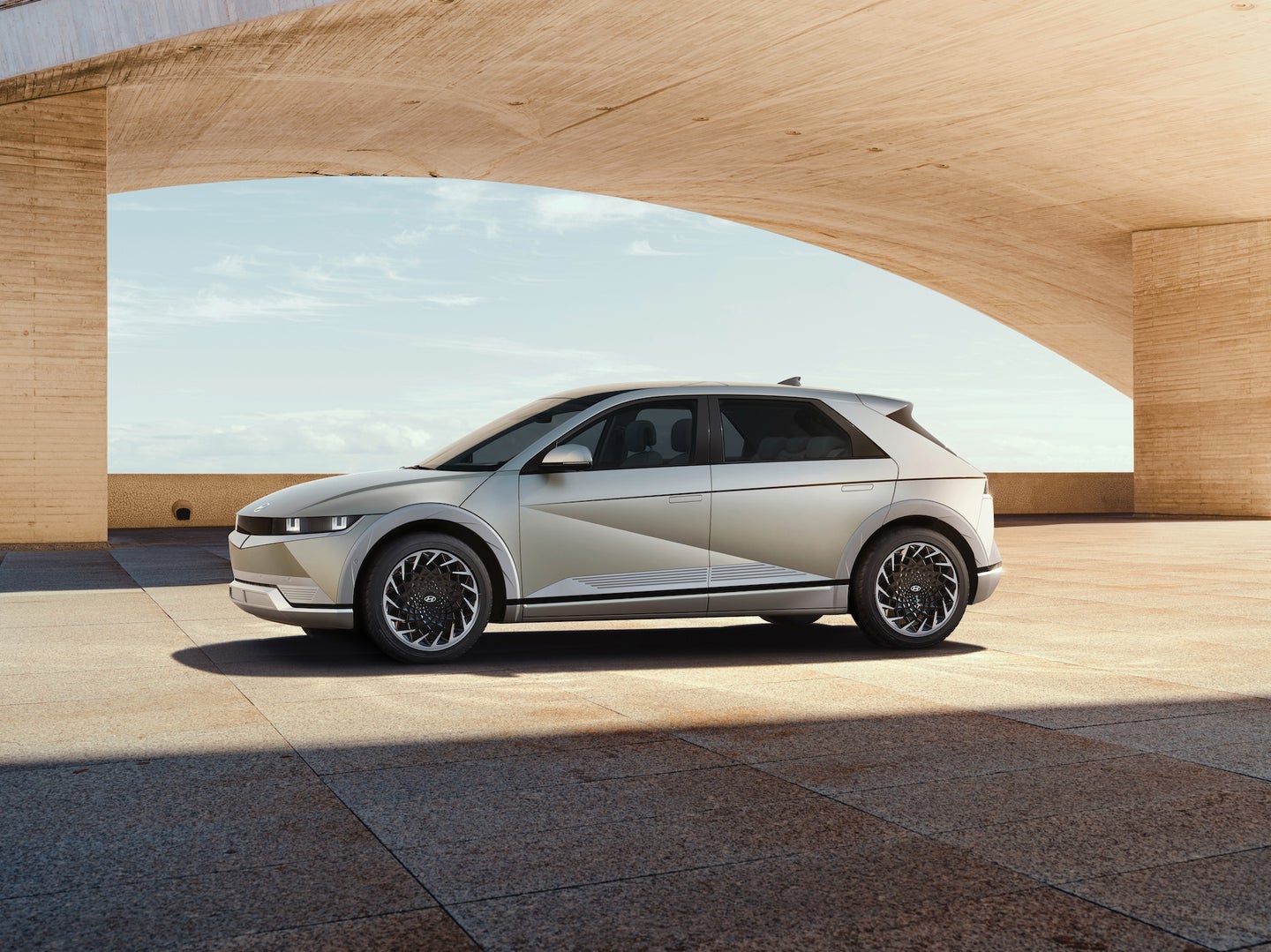 Hyundai’s upcoming Ioniq 5 crossover packs a fascinating, handy feature that’s rare among electric vehicles. It’s called bidirectional charging, and it allows its owner to share the vehicle’s battery power with just about anything that can plug in to a wall.

Essentially, bidirectional charging transforms a vehicle into a battery pack on wheels, much like the small portable charger you might use for your cell phone. Owners can use this technology to provide power to accessories, tools, and even home appliances when the typical approach just won’t cut it. The feature is called Vehicle-to-Load charging.

Hyundai says that the Ioniq 5 is able to provide 3.6 kilowatts of power (either at 110 or 220 volts) via the crossover’s two on-board outlets that support the Vehicle-to-Load functionality. One outlet is located under the second row seats for in-car use, and a second always-on outlet located at the charging port is for external accessories. The automaker stresses that the latter could be useful if camping in a remote location, or in the case of a blackout at home in which powering essential appliances are a necessity.

The Ioniq 5’s battery pack holds enough charge to power a mid-sized air conditioner and 55-inch television for up to 24 hours, according to Hyundai. In the event of a power failure, all a homeowner would need to do is run an extension cord from that outlet near the charging port to the appliance they need juice for.

Of course, Hyundai’s upcoming vehicle isn’t the only car planned for release which will support Vehicle-to-Load charging. Hyundai’s sister company, Kia, recently announced that its upcoming EV6 will have the same capability. It’s built on the same underlying architecture as the Ioniq 5, which the company calls its Electric-Global Modular Platform, or E-GMP for short.

The key piece of the E-GMP platform—the component that allows the bidirectional charging to work—is Hyundai’s Integrated Charging Control Unit (ICCU), which serves as a replacement for legacy on-board charging circuits found in the majority of EVs on the market today.

The on-board charging circuits work as a bridge between the vehicle’s battery management unit and the EV charging station. When a vehicle is plugged into a power source, it traditionally allows for directional charging to occur from the grid to the vehicle. It’s also responsible for providing what’s known as power factor correction to ensure charging efficiency, and, if necessary, converts AC power into a more usable DC current.

Hyundai developed its ICCU to allow for bidirectional power conversion, meaning that vehicles based on the E-GMP platform will be able to use its hardware to output power to external accessories, appliances, and eventually even charge other electric vehicles requiring a bump in electron supply.

Vehicle-to-load charging is just the start of how automakers envision using battery-electric vehicles to power homes and hobbies.

A member of Volkswagen’s board, Thomas Ulbrich, recently said in an interview with German news source Handelsblatt that vehicles based on VW’s proprietary MEB platform will support more robust Vehicle-to-Grid charging.

While Vehicle-to-Load charging is meant to provide power to a small number of items at one time, Vehicle-to-Grid integration would allow vehicles to discharge power back into the electrical grid to prevent undue stress during peak hours, similar to solar panels returning unused energy back to a utility company. Vehicles can then be scheduled to charge on off-peak hours when electrical rates may be cheaper and energy demand is lower.

And in case of a total loss of power, future vehicles that support high-discharge Vehicle-to-Building charging could provide some resilience for short periods of time by providing total power to a home, similar to a Tesla Powerwall.

Presently, one of the most notable other vehicles to feature bi-directional charging is the current-generation Nissan Leaf. However, the Leaf requires a compatible charger in order to discharge its high-voltage battery for home use. Hyundai’s offering would eliminate the costly investment of third-party charging equipment by allowing owners to use the on-board outlets.

Vehicle tech in this field may one day be used to help out during disasters. For example, it could have been extremely useful during the devastation of Winter Storm Uri which left which left as many as 4.5 million Texan homes and businesses without power for several days. Automaker Ford called on dealers to loan F-150 pickup trucks with on-board generators to those in need during the storm. As EV ownership becomes more commonplace and charging technology improves, people may be able to use their cars to keep gadgets and appliances powered should the need arise.