Party On Autopilot With The Mercedes-Benz Vision Tokyo 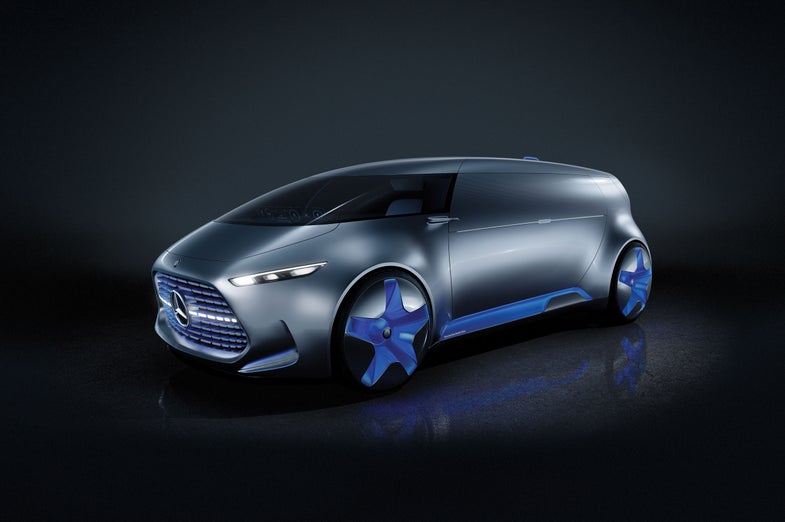 The impending arrival of autonomous vehicles has a lot of engineers wondering: What will the interior of a smart car look like without the steering wheel, pedals, and gauges? And what will we do with ourselves if we’re not driving? Mercedes-Benz has a feeling we’ll hang out like we’re on a futuristic party bus.

The company’s Vision Tokyo concept car, unveiled at the Tokyo Motor Show, is aimed at drivers who love their digital toys. A circular leather couch that seats up to five people dominates the interior space. It wraps around what designers say will be a holographic display, capable—in theory—of projecting maps, games, music choices, and other apps that passengers can use as they ride along in electric-car silence.

The car’s single door takes up the entire left side and swings open like one of the falcon doors on a Tesla Model X. To enhance that vibe even further, the design team added color-changing LEDs along the car’s grill and massive 26-inch wheels, giving it a look right out of Tron.

But the car’s best features aren’t even visible: The engineers at Mercedes built the Vision Tokyo to learn as it drives autonomously. That means that with each journey, the car will learn more about its occupants and their preferences. Add that the car has a hybrid battery and a fuel cell engine, puts out zero emissions, and has a 600-mile range on a single charge. It’s obvious why you’d want one.

In case passengers are not ready to embrace the future with empty arms, a steering wheel folds down, letting them take control—assuming anyone inside still has a driver’s license.

This article was originally published in the March/April 2016 issue of Popular Science, under the title “Party On Autopilot.”