The private spaceflight industry took another giant leap forward today as privately-owned SpaceX, with help from NASA, successfully launched a... 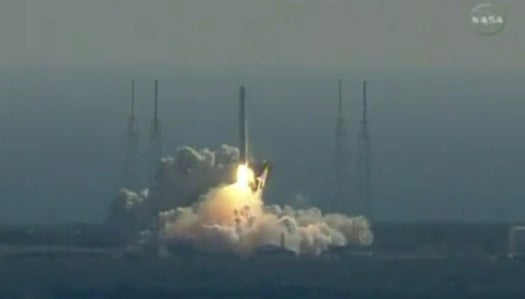 The private spaceflight industry took another giant leap forward today as privately-owned SpaceX, with help from NASA, successfully launched a Falcon 9 rocket carrying its Dragon crew capsule into orbit from Kennedy Space Center in Florida. Though the crew capsule was unmanned for this maiden flight, the launch marks the first time a private spaceflight company has launched a spaceship into orbit with the intention of bringing it safely back to Earth.

SpaceX confirmed via Twitter that shortly after liftoff the first stage transitioned beautifully into the Falcon9’s second stage burn, which put the Dragon into orbital position. At that point, the Dragon capsule separated from the stage two booster and initiated its own propulsion.

Dragon is now in orbit where it will circle the Earth two or three times before reentering Earth’s atmosphere and, if all goes well, splashing down some 500 miles off the coast of Mexico in the Pacific Ocean later today. We’ll keep you updated on that progress here. In the meantime, soak up the historic launch below.

Update: At just after 2 p.m. EST, SpaceX’s Dragon capsule splashed down in the Pacific after successfully completing reentry maneuvers and deploying its three drag parachutes. The splashdown marks the first time a commercial entity has launched a spacecraft into orbit and successfully brought the crew capsule safely home. Congratulations to SpaceX (and NASA) on a historic job well done.