In 1999, professors Robert Twiggs of Stanford University and Jordi Puig-Suari of California Polytechnic State University began to standardize the... 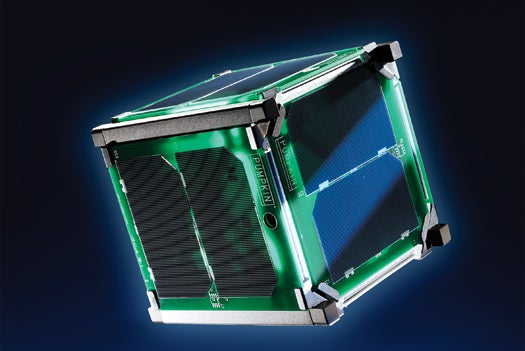 In 1999, professors Robert Twiggs of Stanford University and Jordi Puig-Suari of California Polytechnic State University began to standardize the satellite business. They designed a small orbital unit-–a four-inch cube with little metal feet–-that was wide enough for solar cells, basing their design on a plastic display box for Beanie Babies. Their “CubeSat” had enough room for a computer motherboard and a few other parts necessary to do limited experiments in space, such as monitoring weather or photographing Earth. The design would significantly lower the cost for students to conduct experiments in space. CubeSats could be launched at the same time and piggyback on larger, more expensive missions, mitigating the expense of getting satellites into orbit.

With the design complete, Puig-Suari began to work with the three U.S. agencies that regularly launch satellites—the National Reconnaissance Office, the Department of Defense’s Space Test Program and NASA—to convince them to build CubeSat-ready berths into as many launches as possible. Meanwhile, the aerospace engineering department at CalPoly has become a sort of standards clearinghouse for NASA, testing each academic satellite to make sure the box won’t shake itself apart and cast shrapnel through the rocket during launch. CalPoly and Stanford maintain a forum and post all standards on CubeSat.org.

With so many scheduled launches, an undergraduate engineering student […] can design one during her freshman year and see it reach space before graduation.Twiggs and Puig-Suari’s efforts are paying off. Since 2001, about 50 CubeSats have entered space. The pair sent up their first in 2003, spending $100,000 in grant money to stow it on a Russian Dnepr launch. When the SpaceX Falcon 9 rocket launched in December 2009, six CubSats were aboard, packed three units at a time inside a spring-loaded jack-in-the-box container called a Poly-Picosatellite Orbital Deployer (P-POD), that was developed at CalPoly. After the payload deployed, the door of the P-POD popped open and the spring pushed all three satellites into orbit, where they unfurled solar panels and began transmitting information to their creators below. This year at least three rockets will launch with room for CubeSats, including the NROL-36, which can fit 11.

With so many scheduled launches, an undergraduate engineering student at one of the nearly 100 schools making CubeSats can design one during her freshman year and see it reach space before graduation. When Roland Coelho, a CalPoly graduate student, was filling out a preflight survey for his CubeSat last year, the range safety officer at Vandenberg Air Force Base in California approached him in confusion. “It asks whether you’ll need a military convoy to escort you,” the officer said. “You don’t?”

Many academic CubeSats currently in orbit report their position, battery life and findings to ham-radio operators on Earth, who forward the information to the originating school. But projects are becoming more ambitious. The Air Force plans to use two networked CubeSats to monitor the Earth’s atmosphere and provide the world’s first real-time look at space weather. Carl Brandon of Vermont Technical College is developing an ion-drive CubeSat system that he says will be able to propel itself to the moon.

Puig-Suari and Charles Scott MacGillivray, who ran a small team of satellite developers at Boeing until last year, have now spun off their own company, called Tyvak, which produces CubeSats on a contract basis for private clients and the U.S. government. A marketplace of standardized components has also emerged, led by Stanford engineering professor Andrew Kalman’s Pumpkin, Inc., which has sold CubeSat kits to more than 100 universities, governments and nonprofit organizations. Kalman says that once people begin to think of CubeSats as disposable, building them out of off-the-shelf components and sending them up 100 at a time, the devices will truly have come of age. “If we launch a group of satellites built out of Android phones, you’ll have app developers able to dream up what to put in space,” he says.

A CubeSat today can cost as little as $100,000 to build, and buying a berth on something like a Falcon 9 runs around $250,000. In the aerospace industry, that’s spare change. The low cost also makes losing a CubeSat tolerable. Last March, a rocket carrying NASA’s Glory satellite and three CubeSats crashed into the ocean. “We were bummed,” says Coelho, who watched the failed launch. “But the NASA guys had lost a $400 million satellite.” One of the lost CubeSats was, in fact, a duplicate. In October, its twin made it into space. 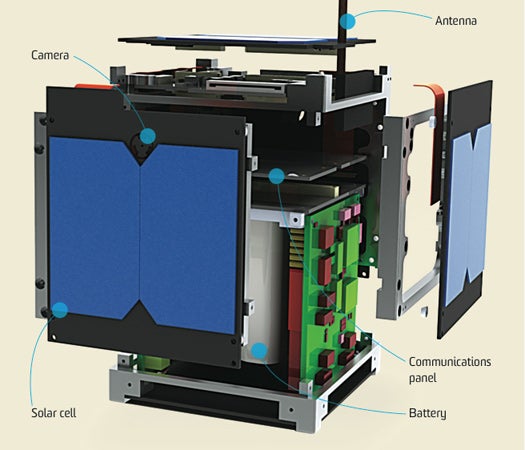 HOW TO READY A CUBESAT FOR SPACE

The pre-launch guidelines for CubeSats stipulate that the object must be 10 by 10 by 11 centimeters (the extra centimeter is for the little metal feet) and no heavier than 1.3 kilograms. A satellite must remain fully deactivated—no power of any kind—until it exits its spring-loaded launch container; errant signals could scramble the electronics of the primary payload or the rocket’s guidance system. And teams must submit a detailed plan for de-orbiting—tipping the satellite such that it disintegrates in the atmosphere—within five years of leaving Earth, or risk having their satellite killed before it ever takes off.