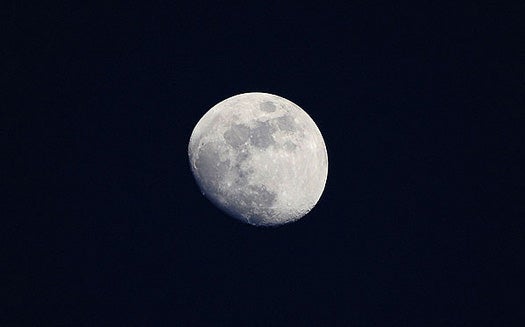 The standard explanation for the formation of our moon holds that during the formation of our solar system, a giant object smashed into the infant Earth, knocking loose a huge chunk of our planet that became our orbiting satellite. But the problem with easy explanations is that the science doesn’t always reconcile with the theory. A new explanation of lunar formation holds that the big event that cleaved the moon wasn’t a space object at all, but a home-grown nuclear georeactor going supercritical, blasting the moon into orbit.

The rub with the standard explanation is thus: if a giant asteroid or some such object smashed into earth and sent the moon hurtling into its present orbit, the Moon ought to be composed of about 80 percent of that object’s constituent material and about 20 percent of the Earth’s. But the makeup of moon rock closely mirrors that of the Earth. The ratios of heavier elements in moon rock and Earth rock are simply too similar for the standard theory to hold up without some further explanation.

Another theory, known as the fission theory, suggests that the moon spun out of the rapidly spinning blob of molten rock that would later become Earth. But though this theory has lingered for 150 years, it has never been taken too seriously because no one could explain a catalyst that might launch a small chunk of earth out into space with enough force to defy Earth’s gravitational pull.

However, a couple of European researchers think they may have found the missing piece to the fission theory puzzle. According to their explanation, the centrifugal forces on Earth concentrated heavier elements like uranium and thorium near the surface around the equatorial plane. Enough of these elements in high enough concentrations could set off a runaway nuclear chain reaction, similar to the kind that cause nuke plant meltdowns. In this way, a natural-born nuclear georeactor was pushed to supercritical levels and: BOOM! The moon was cleaved from the Earth and rocketed into orbit by a massive nuclear explosion.

It’s a tough theory to test, but we do know that nuclear georeactors existed, their legacy left behind in the uranium we mine from the Earth today. If the theory can be confirmed, it could reverse decades of loose consensus on how our moon came into being.