If I Ate Lab-Grown Human Tissue or Organs, Would I Be Considered a Cannibal?

We realize you’re asking hypothetically. If you’re looking to indulge in the other, other white meat but can’t stand the... 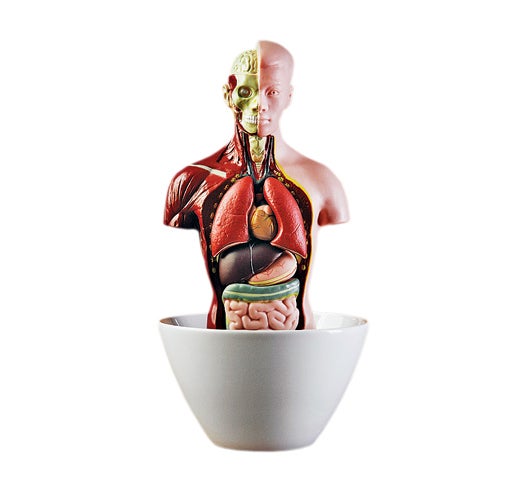 We realize you’re asking hypothetically. If you’re looking to indulge in the other, other white meat but can’t stand the idea of society branding you a cannibal, this might be the loophole you’re looking for. And there are plenty of dishes to choose from.

Since winning a Popular Science Best of What’s New Award in 2006 for the world’s first artificially grown human-tissue replacement, Anthony Atala, the director of Wake Forest University’s Institute for Regenerative Medicine, has been busy trying to cultivate more than 20 types of human tissue, including liver, kidneys, lungs, heart valves, skeletal muscle, erectile tissue and bone. Grown from cells harvested from patients, these tissues are as good as what you were born with. “In tissues that have been successfully implanted in humans, testing shows no discernible differences between the native tissue and the lab-engineered tissue,” says Atala (who declined to speculate on what those tissues might taste like). In other words, a kidney grown in a dish is biologically identical to one plucked from a person.

Whether eating that kidney would constitute cannibalism is much less clear-cut, and that’s primarily because the common definition of “cannibal” isn’t much more specific than “a human who eats other humans.”

“What grosses us out about cannibalism is that it involves using other people as a means of nutrition, or biologically integrating some other human being into oneself,” says Jonathan Moreno, a professor of medical ethics at the University of Pennsylvania’s Center for Bioethics. “There’s also a certain nauseating sensation that detached body parts elicit, because you know that they once belonged to another human.” But because artificial organs are essentially a few cells multiplied many times over and shaped by a protein scaffold, the connection to another person is much weaker, Moreno explains. “So I guess I’m not persuaded that eating them would count as cannibalism.”

That said, Moreno considers the whole thing a bad idea. “Compared to meat derived from lower animals, I don’t see the nutritional benefit for humans,” he says.

It’s also bad business. “Let’s say a company grew more than a slab of meat—a whole limb,” Moreno says. “They couldn’t advertise it as human body parts, only that it was related to human tissue, and that might not be exciting enough to make someone think that they’re breaking a taboo. This wouldn’t be cannibalism, but it objectifies body parts and could be seen as commodifying a good that unacceptably resembles a human body part. And that could get you into some legal issues.” In the end, we suggest keeping lab-grown tissue in the operating room and off the dinner table.