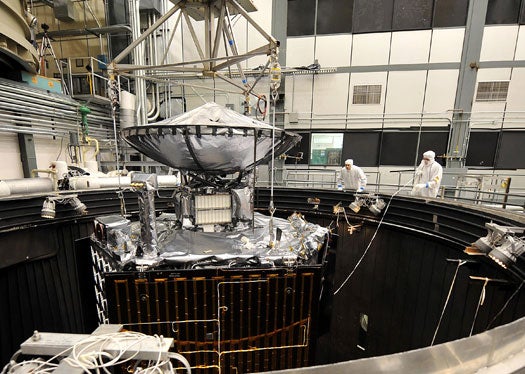 Exploring the final frontiers requires a delicate balancing act between competing engineering needs. To probe the mysteries of inhospitable places, from ocean trenches to the blistering atmosphere of the sun, scientific instruments must be tough yet ultra-sensitive — they have to survive their environments but remain exposed just enough to do their jobs. Balancing protection and intentional vulnerability can be a major challenge. A NASA spacecraft launching this morning marks a new leap forward in meeting this balance.

See how the probe was built.
Juno, which will study the formidable radiation belts of Jupiter, is arguably one of the toughest spacecraft ever built, equipped with a celestial carapace that will shield its heart and data center against a raging storm of deadly radiation. And it is one of the most refined, with instruments that can measure Jupiter’s sub-cloud atmosphere in unprecedented detail.

Juno’s main investigations have to take place in one of the harshest environment in the solar system, aside from the neighborhood around the sun. It will serve as a valuable test bed for future missions in the universe’s most dangerous places — and it will answer important questions about how Jupiter, and the rest of the planets, came to be.

Engineers designed a titanium radiation vault to protect the spacecraft’s controls, but they could only provide limited protection for most of the sensors, which had to be built of special materials that can tolerate high radiation levels and dissipate an electrical charge. Juno’s microwave radiometer, one of its most important instruments and the antenna that determined the spacecraft’s overall size, was separated from its receiver, requiring long radio frequency lines to transmit data. The separation was a departure from typical spacecraft designs, said Scott Bolton, Juno’s principal investigator and director of the space science department at Southwest Research Institute.

“The sensors are sitting out and vulnerable. They are spot shielded, so they can withstand the radiation, but the brains behind the instruments are all umbilically tied back into this vault,” he said. “We needed very specially shielded cable, that all had to be laid out ahead of time, to connect the sensors all the way back to the brain.”

Outside, the cables are exposed to -220 degrees F; in the vault, temperatures will remain between 32 degrees and 104 degrees F.

The vault will ensure that Juno’s receivers and electronics receive a total ionizing dose of less than 6 kRad, which is even less than some Earth-orbiting instruments.

All of this will happen with ultra-low power supplies. Juno is the first solar-powered mission to the outer planets, meaning it must subsist on a meager supply of energy generated by its massive 29-foot-long, 9-foot-wide solar arrays, each the size of a semitrailer. When Juno is in orbit, the Y-shaped system, always facing toward the sun, will provide about 450 watts of electricity.

Sunlight will be weaker 400 million miles from the sun, but Bolton said engineers determined it was more efficient to design new, state-of-the-art solar arrays than to build a new nuclear power source. 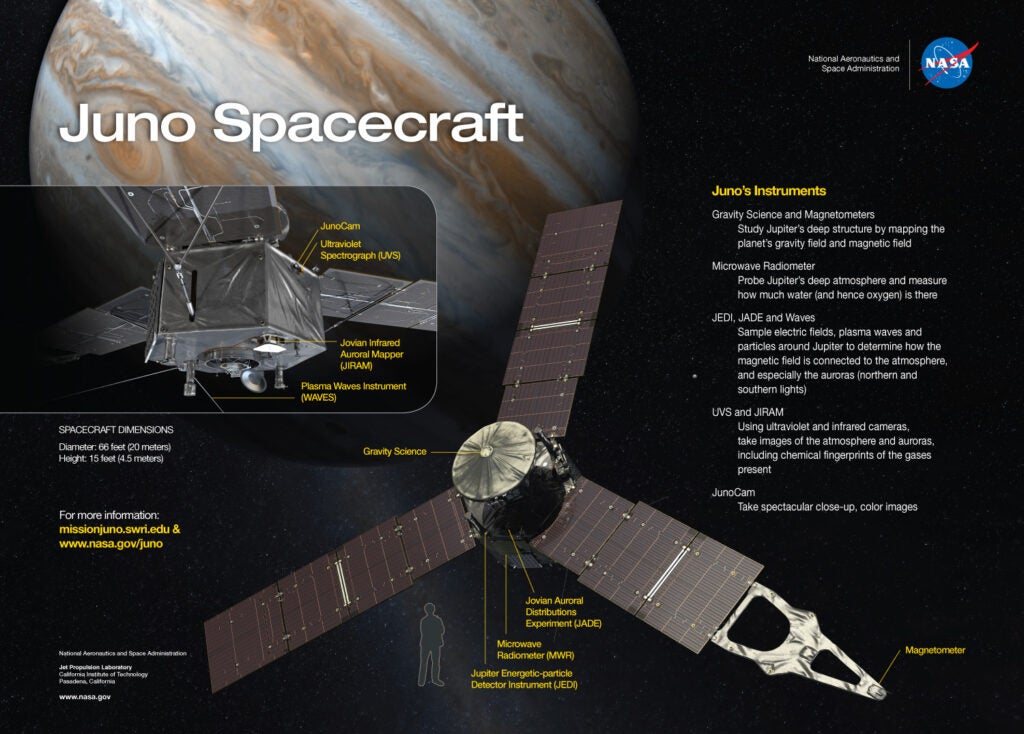 Juno’s scientific payload includes a color camera, which will provide the first detailed view of Jupiter’s poles, along with several other instruments that details the spacecraft’s abilities.

All of these careful designs will help Juno peer beneath Jupiter’s clouds like never before — hence its name, after the wife (and sister) of the Roman god, who was able to peer beneath a veil of clouds that Jupiter drew around himself.

When it arrives at the gas giant in 2016, Juno will make 33 orbits around Jupiter’s poles, approaching from the north and dipping beneath the radiation belts, exiting from the south. This orbit will enable Juno to safely study the planet’s deep atmosphere, gravity field, magnetic field and polar magnetosphere.

One of its primary goals is to look for oxygen, which should be abundant in the planet although scientists have had trouble finding it. Bolton said it likely lies beneath the planet’s striped cloud layers, where it is bound up in water. Juno’s microwave radiometer will study the planet’s water abundance, which will inform theories about how the planet coalesced from the cloud of dust that also formed the sun and the rest of the solar system.

The history of our planet, as Juno’s science team puts it, lives in Jupiter. Everything inside the solar system can fit inside the fifth planet, and then some — the other gas giants, every asteroid, comet, moonlet and planetesimal. Unlike Earth and the other rocky worlds, it has not changed since its birth, so it serves as a time capsule for the rest of the solar system, Bolton said.

“We know Jupiter must have been incredibly important, because it’s the biggest piece besides the sun. It must have been formed very early, if not first, and it must have dictated the conditions and set up everything else,” Bolton said.

Jupiter has captivated astronomers since Galileo first saw its moons in 1610. Scientists now know plenty about it — in part through flybys by the Pioneer, Voyager and Cassini probes, as well as a long-duration stay by a probe named for Mr. Galilei — but many questions remain. The Galileo probe, which visited the Jovian system from 1995 to 2003, plunged into Jupiter’s atmosphere to sniff its contents, and found far less water than scientists expected. Many researchers now believe it looked at a particularly dry, shallow zone; Juno is designed to find that water by dipping much deeper, about 375 miles into Jupiter’s atmosphere.

Other measurements will determine whether Jupiter has a core of heavy elements at its center, or if it’s made of gas throughout, Bolton said. If it has a rocky core, that means it formed later, after rocks solidified around the sun; if it’s all gas, that could mean the planet formed right after the sun, he said. Scientists will also learn what causes Jupiter’s powerful magnetic field, the strongest of any planet, by studying the metallic hydrogen that swirls deep within.

When Juno arrives at Jupiter, it will be careening through space at 134,000 miles an hour, one of the fastest spacecraft ever. Juno’s cartwheeling motion makes it easier to control at those speeds, Bolton said. After 33 orbits, Juno will plunge into Jupiter’s atmosphere, taking measurements until it burns up like a meteor in the dense and roiling clouds.

“We can’t look at our earliest history by looking at ourselves,” Bolton said. “What we’re trying to do is discover the recipe for planets. The approach is to start with getting the ingredient list, and that’s what Jupiter represents to us.”