Carbon Offsets and Recycling Bins Do Not a Green Olympics Make

The pressure to green-up the Olympics builds with each games, forcing the host cities to get creative. Like using beetle-chewed wood for your skating center's roof 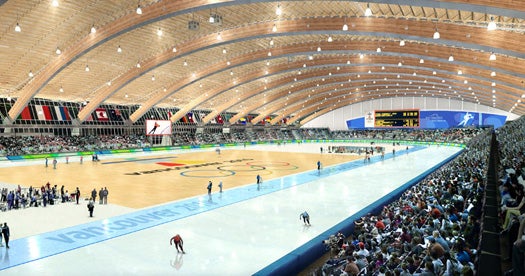 With an unexpected lack of snow making skiers’ lives miserable at this year’s Olympics, Vancouver is smartly following the trend of going greener than the Olympics before it. Carbon offsets and recycling bins are as old school as a 720 on the snowboard half pipe, so the Canucks had to get a bit more creative to ensure the 2014 games in Russia take place in a world where snow still falls over Sochi in February.

The Richmond Olympic Oval is to Vancouver as the Bird’s Nest was to Beijing (though on a scale more befitting of Vancouver than Beijing). The 8,000-seat, 512,000-square-foot building uses a novel styrofoam insulation beneath the ice to obtain the necessary ice temp, thickness, flatness and hardness for a variety of events. Heat waste from cooling the ice is used to keep the arena warm. The iconic wood wave roof was built with one million feet of timber from trees killed by the pine beetle, the largest such usage in the world. The pine beetle epidemic that’s ravaged the forests in British Columbia (more than14.5 million hectares) is itself a result of consecutively warm winters.

Just how much energy does the greening of the oval save? 43,817kWh in the past week, the equivalent of an individual running 478,000 km. A quick check on the Venue Energy Tracker website will offer such real time data on energy consumption for each Olympic venue. Power company BC Hydro, in conjunction with the Vancouver Organizing Committee, has built the site, and hopes it could serve as an example of what home monitoring could become. See a spike in usage? Try turning off the lights in the popcorn machines. The running plot shows the actual consumption alongside the predicted baseline had green innovations not been added. Greenhouse and energy savings per occupant and per area are also provided along with some nice examples to help visualize savings. 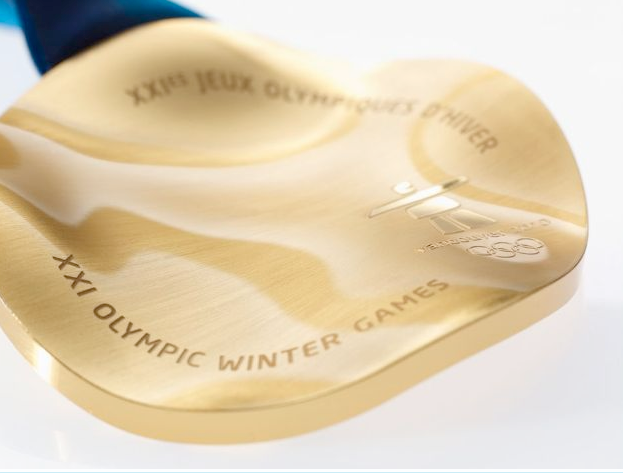 Via housands of unwanted Canadian TVs

Even the gold will be green in Vancouver. Metal salvaged from recycled televisions, circuit boards, and other such e-waste was purchased by the Royal Canadian Mint from metal company Teck Resources out of Vancouver for $1.24 million to make the 1,014 unique undulating medals. The gold that’s not green will actually be more than 90% silver while the so-called bronze will actually be copper. For more on their unique fabrication, there’s an impressive video about the stamping, milling and etching required to make the medals on the site of the Royal Canadian Mint.

With the summer games in London just two years away, the Brits are determined to play the eternal game of environmental one-upsmanship, hoping to take the title of “greenest games ever” from Vancouver as soon as their flame is lit (hopefully without the technical difficulties). And they’re getting creative: The Olympic stadium in East London for the 2012 games will be built, in part, from 52 tons of scrap metal from guns, knives and old keys confiscated by the Metropolitan Police Service (they’ll see your pine beetle and raise you). Even the streets will be paved in green with plans for 16,000 slabs of energy sucking sidewalks that use deformations in a rubber disc beneath the slap to store energy that will power street lights and subway systems.