A primordial second moon may have smacked into our existing moon billions of years ago, its remains pancaking across its... 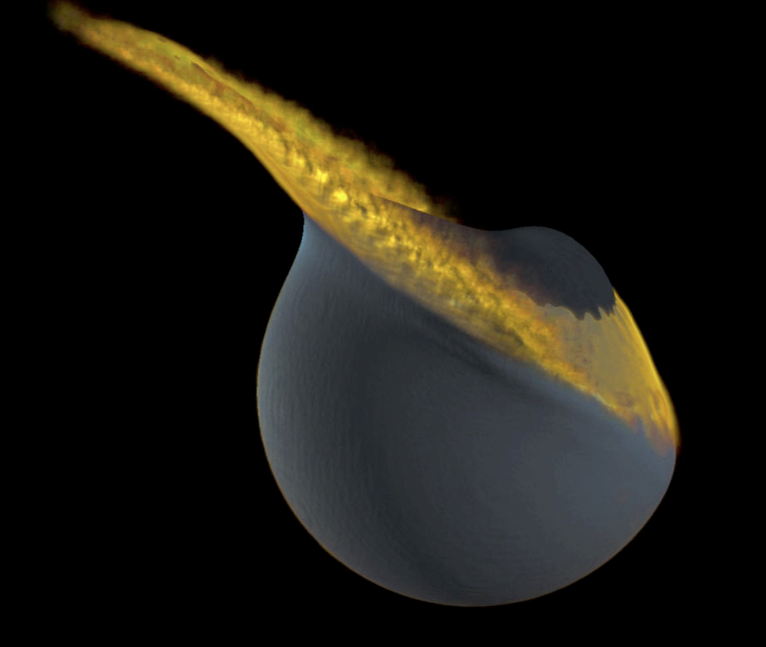 A primordial second moon may have smacked into our existing moon billions of years ago, its remains pancaking across its larger sibling and disrupting the bigger moon’s still-cooling surface. This new theory could explain why the moon’s far side looks so different from the one that perennially faces us.

Both moons would have coalesced from the remnants of debris ejected when a Mars-sized object whacked the Earth early in its formation, scientists say. Most moon-formation theories have suggested our sole satellite formed from that chaotic jumble. But a new paper published today in Nature says a tiny Trojan moon, about one-thirtieth the size of the one we have today, survived as well, inhabiting a Lagrange point 60 degrees in front or behind the moon.

The two moons would have existed in peaceful harmony for tens of millions of years, long enough for both moons to almost completely solidify, say Erik Asphaug, a planetary scientist at the University of California, Santa Cruz, and Martin Jutzi, now of the University of Berne. Earth’s gravity would have gradually caused both moons to migrate outward, until the Sun’s gravity started to play a role, according to a writeup in Nature News. Then the Lagrange point equilibrium would have been disrupted, setting the small moon adrift.

When the moons eventually collided, the smaller moon would have been destroyed, its remnants coating half of the larger satellite. This is a valid explanation for the odd makeup of the moon, Asphaug and Jutzi say. They conducted detailed computer simulations to find out what would have happened.

The visible side is dominated by low-lying lava plains, called maria, which contain potassium, rare earth elements and phosphorus, a compendium known as KREEP. The far side, which was first illuminated by human satellites in 1959, is composed of mountainous terrain with a thicker crust. Other theories have suggested the maria are the result of Earth’s gravity yanking material up from within, leaving the far side unperturbed, or the result of convective action in the moon’s mantle. But Asphaug and Jutzi say when the departed small moon made impact, on what happens to be the current far side, it smooshed the KREEP toward the opposite side.

The impact would not make a typical crater, Asphaug explains to Nature — the impact zone was only a little bit bigger than the impactor itself. “The impactor just kind of splats into the cavity,” he said.

It’s an interesting theory in many ways, if only for the idea that the moon once had a smaller sibling, because Earth is the only bemooned body to have just one. Neither Mercury nor Venus has a natural satellite, and Mars has two, Phobos and Deimos. The other planets and non-planets have a bunch — even Pluto has four that we now know about.

Serendipitously, NASA is about to send a pair of twin satellites to map the moon, and study its interior composition. The Gravity Recovery and Interior Laboratory, which will launch next month, might be able to help answer some questions to test this new theory.