How it Would Work: Destroying an Incoming Killer Asteroid With a Nuclear Blast 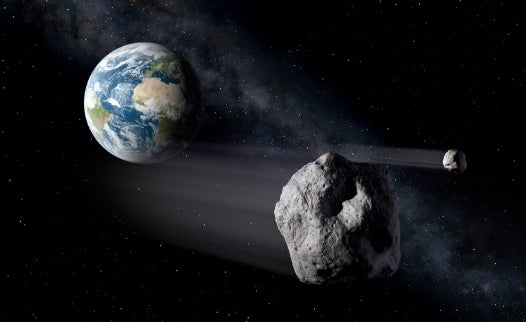 One way or another, it’s on everyone’s minds, living somewhere in the back of our collective consciousness. Hollywood knows it, and continues to plumb it for box office numbers. Sci-fi is rife with it. The fossil record shouts warnings across millennia about it. Even the dinosaurs developed a particular, albeit brief, loathing for it. The killer asteroid–the one that we might never even see coming–could end life on this planet and there would be nothing humans could do about it.

It creates a kind of helplessness that’s difficult to even think about, and it’s Robert Weaver’s job to think about it all the time.

Weaver, a scientist at Los Alamos National Laboratory (LANL), doesn’t hunt for killer asteroids, but he does study the ways humans might use their vast nuclear arsenals–designed to wipe each other off the face of the planet–to save the whole of humanity from a catastrophic asteroid impact. Weaver has been running simulations on LANL’s Cielo supercomputer to determine humanity’s capacity to mitigate an impending asteroid threat using a one-megaton nuclear energy source–one roughly 50 times more powerful than the blasts inflicted upon Hiroshima and Nagasaki at the close of World War II.

There’s more than one way to divert an asteroid of course. With the proper notice, like that afforded us by the asteroid Apophis or 2011 AG5, humans could fly a spacecraft out to intercept an asteroid in deep space. This spacecraft could impact the asteroid to nudge it slightly off course, or it could fly abreast of the threat, acting as a kind of “gravity tractor” whose slight gravitational tug would push it off its collision course over time. It’s even been suggested that a spacecraft could bombard one side of a killer asteroid with a laser, heating it enough to change its orbital characteristics and its path.

That’s if we have time. “From my perspective, the nuclear option is for the surprise asteroid or comet that we haven’t seen before, one that basically comes out of nowhere and we have just a few months to respond to it,” Weaver says. In other words, lacking the time to deploy something more elegant, we can pull out the method of last resort and blast the threat out of existence with the biggest energy source at our disposal. There’s no telling exactly how an asteroid deflection mission would transpire because it’s never been tried before, but scientists like Weaver are hard at work simulating the ins and outs of mitigating of an incoming impactor. It’s knowledge we hope we’ll never have to use, but should we ever have to, this is how it would work.

Weaver conducted a whole parameter study on his simulated asteroid mitigation mission that included all kinds of variables including composition, the size of the constituent rocks making up the asteroid, the porosity of the asteroid, and so on. But he had to start with some fixed parameters. For the 3-D simulation (depicted in the video below) he chose to model the potato-shaped Itokawa asteroid, the same one visited by Japan’s Hayabusa asteroid lander back in 2005.

Weaver’s simulations don’t address the delivery of a nuclear energy source to the asteroid, though there are people out there who do study that very issue. For instance, at the biannual Planetary Defense Conference global partners hash out the thorny politics inherent in hurling the world’s most powerful weapons into space for peaceful purposes.

But we know we can intercept asteroids in deep space. Japan’s Hayabusa probe actually landed on and returned from Itokawa during the last decade, and NASA’s Dawn spacecraft is currently in orbit around the asteroid 4 Vesta in the asteroid belt. We’ve even crashed into a comet before, via NASA’s Deep Impact mission, which hurled a probe into the center of comet 9P/Tempel. If it’s close enough to be a threat, we can rendezvous with it.

A surface explosion, known as a contact burst, wouldn’t actually take place right at the surface. Based on what we know about asteroid composition–and there’s still much to be learned–many asteroids are more like huge orbiting piles of smaller rocks than cohesive, solid chunks of hard material. There appears to be a soft dust layer, known as the regolith, that covers asteroids like Itokawa, a layer that could be as much as 30 feet deep. A nuclear energy source rammed into an asteroid could penetrate down into this layer with little trouble, giving it some of the kinetic advantages of being buried within the asteroid. And once the energy source is in direct contact with the asteroid, it’s all pretty much over with.

“The big plume that you see coming out of the top of the asteroid in the simulation is the effect of all that heated rock in the vicinity of the explosion being expelled from the asteroid at high velocities,” Weaver says. “There’s rock-to-rock kinetic energy transfer that happens. These rock-to-rock interactions propagate the energy from the surface all the way through to the opposite end of the asteroid, totally disrupting these rubble piles.”

In other words, the blast is transferred all the way through the asteroid, scattering the once cohesive rubble in every direction. The asteroid threat is no more.

In the simulations, the asteroids essentially come apart, hurling rock outward with the force of the nuclear blast. But the most visible objection to this kind of asteroid mitigation is the idea that by blowing an asteroid apart, we might just create many smaller rocks that could still be big enough to threaten Earth. Moreover, if the rocks aren’t sufficiently scattered the asteroid could potentially recombine under their own gravity, making the nuclear blast a moot point.

But Weaver’s simulations showed something unexpected: the rock expelled from the far side of the asteroid by the blast was kicked out at velocities that surprised even Weaver. Given that the escape velocity–the velocity at which the constituent rocks need to be traveling to escape the asteroid’s own gravity–for an asteroid Itokawa’s size is less than a centimeter per second, the possibility of the asteroid recombining after the blast is virtually non-existent.

“In my 2-D calculations I’m seeing velocities imparted to expelled rock on the opposite side of the asteroid of meters per second,” Weaver says. “The escape velocity for an asteroid such as the one I’m looking at is fractions of a centimeter per second. I was calculating velocities of expelled rock at one to ten meters per second, well in excess–by orders of magnitude–of the escape velocity. That was a surprise to me and gave me some confidence that this really is an effective mitigation technique. The asteroid will not recollect, and it will not pose a hazard of a bunch of smaller rocks hitting the Earth.”

This, of course, is according to the calculations.

“All this depends obviously on exactly where the intercept is done, how far away from the Earth it is, how much time we have left–and all of these are unknowns until we discover a threatening asteroid,” Weaver says. “All of these assumptions are assumptions. What I think I’m bringing to the table for the first time are truly validated simulations of these non-uniform, non-circular compositions that will hopefully give policy makers a better understanding of what their options are.”

With those options defined, at least for the scenario of an Itokawa-sized threatening asteroid, Weaver will next turn to an expanding set of parameters simulating larger and larger rocks of varying compositions up to the size of a “dinosaur killer” (about 6.2 miles across). To that end, Weaver and LANL will soon begin a collaboration with Lawrence Livermore National Laboratory that will pool computational and funding resources that will take this kind of asteroid mitigation exploration to the next level, assessing a range of potential threats. For now, those killer asteroids live solely in the simulations running on LANL’s supercomputers. But that might not always be the case.