With A Bit of Math, Researchers Find a Way to See Through Opaque Materials

Light is essential to vision, at least the kind we perform with our naked eyes. This is why we can... 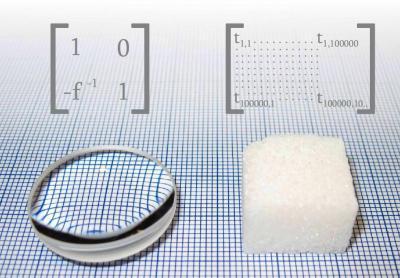 Light is essential to vision, at least the kind we perform with our naked eyes. This is why we can see through a glass lens but not through a brick wall (though we’re working on that). But what about materials that let some light pass while scattering it in seemingly chaotic ways? Our naked eyes can’t reassemble that light into coherent images, but using some clever math, a team of researchers has devised a way to focus light through opaque materials to “see” objects on the other side — provided they have enough data about the material.

The team developed a numerical transmission matrix based on the way light passes through a layer of opaque zinc oxide, a common ingredient in white paints. The matrix captured the various ways the light changed upon passing through (and by various, we mean various; the matrix included over 65,000 numbers detailing the way the material scattered the light), creating a model for how light should pass through zinc oxide every time.

Using that transmission matrix, they were able to manipulate the beam on the transmission side such that it came out the other side focused. They then flipped the experiment on its head, measuring the light emerging from the opaque material and using the matrix to assemble an image of an object behind it.

Theoretically, such a transmission matrix could be developed for any opaque material, but while seeing through paper and white paint may not seem so terribly tantalizing, the experiment really shows the potential for opaque materials in optical devices. At the nano-scale it become increasingly difficult to construct transparent lenses. With a good enough transmission matrix, researchers could better peer through opaque biological materials like cell walls and other membranes that currently obscure our view of what’s happening on the other side.