Why these towns are trying to save an ‘agricultural pest’

In Colorado’s Front Range, advocates capture and relocate prairie dogs before their burrows are bulldozed. 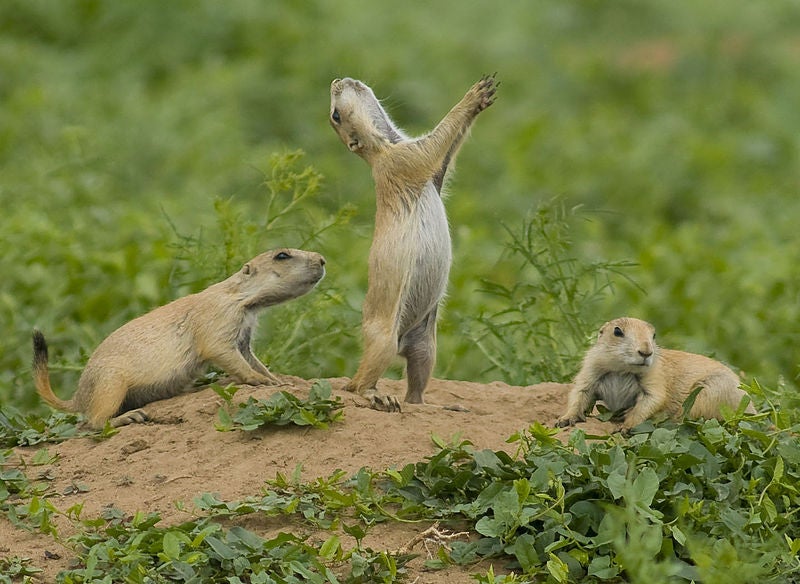 Helen Taylor never considered herself an activist. But in 2015, she learned that an open plot of land in her city of Fort Collins, Colorado was slated for development. 700 prairie dogs called this patch of grass home. “I had been watching and enjoying this colony for many years,” says Taylor, a content manager at a marketing company. “I knew something terrible was going to happen.”

Without any intervention, the prairie dogs would likely have been poisoned or bulldozed, both common and legal practices. So Taylor wrote to the developer, talked to city officials, and started an organization—the Northern Colorado Prairie Dog Advocates—to push for relocating the rodents. She spent roughly a year searching for a suitable site within the city to move them, and wrestled with a complex permitting process. Taylor and a group of volunteers identified the family units within the colony, trapped the animals, and carried them to their new grounds, complete with artificial burrows constructed with plastic tubing. The volunteers made sure the families stayed together, and kept the same neighbors. “We basically are lifting up the colony and placing it intact in a new location,” Taylor says.

Extermination—by farmers, ranchers, developers, and government officials—and habitat loss have wiped prairie dogs from about 98 percent of their historic 368 million acre range. In 11 states from Texas to Montana, prairie dogs once lived in vast underground towns, some teeming with millions of the critters. Since the late 1800s, they’ve been largely treated as a nuisance and poisoned in large-scale eradication efforts. To this day, the U.S. Department of Agriculture considers prairie dogs an “agricultural pest.” In recent decades, whole colonies have perished after catching plague from fleas carrying Yersinia pestis, the same bacterium responsible for the Black Death pandemic, because the rodents have few defenses against the disease.

Saving small, isolated groups of these creatures, like Taylor’s advocacy group did, won’t restore the massive colonies that once thrived in the West. But these smaller patches of city-dwelling prairie dogs could play an important role in raising public consciousness and helping maintain resiliency of larger populations.

After 150 years of poisoning and shooting them, humans are slowly recognizing prairie dogs as more than a pest. The public started to change its perspective in the 1990s, says Ana Davidson, a conservation scientist with Colorado State University in Fort Collins. Around the same time, biologists asserted their status as a “keystone” species that links plants and animals together in a vast grassland food web. Coyotes, badgers, raptors, and black-footed ferrets (a species at the brink of extinction) all eat prairie dogs. Digging burrows also moves the soil around, helping cycle nutrients, which has been linked to healthier, more nutritious grasses for grazers like bison and cattle. And their burrows create habitats for burrowing owls, tiger salamanders, spiders, and insects. All in all, ecologists estimate that more than 150 species interact with prairie dogs in some way. That means these little rodents and their burrows form the foundation of North America’s greater grassland ecosystem—one of the most endangered ecosystems in the world.

Now, in the growing cities of Colorado’s Front Range (an area east of the Rockies that includes Denver) officials are trying to balance the interests of farmers and ranchers with residents newly-enamored of the prairie dog. Since January in the City of Longmont, developers with more than 25 prairie dogs on their property must post the location and number of the animals on the city’s website when planning to build. That gives advocates, including nonprofits and informal volunteer groups, a chance to call around and see if there’s room on city or county public lands or a welcoming private tract to move the rodents. In October 2018, the nearby city of Lafayette enacted an emergency moratorium on killing prairie dogs to buy time as it comes up with a plan of its own. “As the urban population has grown and more people become familiar with prairie dogs, that message of them being a keystone species is something people talk about,” says David Bell, natural resources manager for Longmont’s public works and natural resources department. Prairie dogs have long been a polarizing force, but “on both sides, we’re seeing more interest in how we resolve these issues.” Advocates are increasingly vocal about protection, and those in agriculture tend to argue for pest removal.

In urban areas, where the rodents’ habitat is hemmed in, their numbers can become so dense that their burrowing leads to erosion and loss of native vegetation, says Therese Glowacki, resource management manager with Boulder County. It’s made having to do something to control populations adjacent to people inevitable, though what that something should be is fiercely argued at city and county meetings. “Prairie dogs are kind of a flash point in land use discussions in the West, in Colorado and other places where we have lost most of their habitat,” says Glowacki.

In more rural areas outside cities, the rodents aren’t welcomed either. Prairie dogs dig holes and feed on plants, and thus don’t share the land well with crops. Many ranchers think of them as a nuisance because they compete with cattle by grazing grass. Ranchers also claim the rodent’s burrows can pose a leg-breaking hazard to animals hoofing it around the prairie.

Scientists think that the ranchers’ concerns are exaggerated. Prairie dogs do compete with cows for forage, according to John Hoogland, a University of Maryland behavioral ecologist who has studied prairie dogs for 45 years. “But it’s been vastly overrated, and there are some circumstances where cows prefer to feed on [the land occupied by] prairie dog colonies because the vegetation there is more nutritious.” As for leg-breaking, Hoogland says it’s probably happened at some point, but remains rare. Despite this, beliefs around prairie dogs are deeply ingrained and continue to hold sway with management: In South Dakota, for example, government officials are required to poison a one-mile buffer zone of burrows on public lands adjacent to a property if the landowner complains about the rodents.

To try to strike a compromise, since 1999 Boulder County has managed prairie dogs under a plan that affirms their unique role in the ecosystem—but also recognizes that, sometimes, they’re simply incompatible with humans. It designates areas for habitat conservation, where it actively protects prairie dogs by doing things like spraying burrows with insecticide to kill plague-spreading fleas. When the rodents do begin to creep onto agricultural lands, officials usually trap them and take them to wildlife recovery centers, where they’re fed to ferrets and hawks. Sending them off to get eaten seems like something straight out of a dark comedy, but black-tailed ferrets are the most endangered mammal in North America, and prairie dogs are their main food source, making the county’s facility a grassland trophic chart in miniature.

Glowacki estimates the acres and location of prairie dog towns in the county each year to see if they’re living where intended—the large, contiguous grassland areas they’ve historically called home. Indeed, their numbers are growing in these natural areas, but there’s also many smaller colonies scattered throughout the county. Managing these habitats is challenging because the animals tend to move into nearby properties, Glowacki says, where they tear up landscaping and gardens. Still, protecting even the small populations is important, because they can help repopulate larger habitats devastated by plague.

Lindsey Sterling Krank, director of the Humane Society’s Prairie Dog Coalition, agrees. “Because these [smaller] colonies are fragmented, maybe they aren’t as susceptible to disease.” The urban colonies are physically isolated from the larger habitats hopping with plague-carrying fleas. These prairie dog islands could also help humans. Even a few acres of open land creates an urban wildlife hotspot. Coyotes, hawks, and badgers move in to prey on the prairie dogs. Having a natural food source also diverts these predators from chasing down neighborhood cats and dogs, Krank says.

The Humane Society and WildEarth Guardians recently released a guide for citizens and local governments looking to create their own conservation plans. Krank gets a lot of calls from Front Range residents worried about impending development on their local prairie dog town, and she hopes the guide will help provide tools for people to assess what options are available. Relocation is an option, but if it’s possible to conserve them in place that might actually be ideal. “There’s not an endless supply of receiving sites,” Krank says.

As cities continue to grow and fill in once-vacant lands, relocations may become more difficult. The City of Boulder is struggling with that now. For years, the city has required that developers try to find relocation sites. Since 2013, they’ve relocated a few hundred animals every year. But now, the city has more prairie dogs than it has room for on the “receiving sites,” says Valerie Matheson, Boulder’s urban wildlife conservation coordinator. Prairie dog towns are covering up to 50 percent of some ranching properties in the city, in what was recently deemed a “crisis” that might require killing them on agricultural lands. When a site goes over 30 percent occupation by prairie dogs, the animals start eating more plants and digging up more soil than the area can sustain, Glowacki says. Even the larger county conservation areas that Glowacki manages are close to capacity, with the highest density of prairie dogs seen in 20 years.

In an ideal scenario, prairie dogs are moved from where they conflict with humans to grasslands where they can play their crucial role in those ecosystems, Davidson says. In New Mexico, she helped efforts to capture prairie dogs around Santa Fe and Albuquerque and move them to the Sevilleta National Wildlife Refuge. But in Colorado, it’s illegal to move prairie dogs across county lines without approval from county agricultural officials, impeding large-scale recovery. “Not being able to do relocation across county lines is political and not based on an ecological reason,” Davidson says.

Hoogland thinks that officials need to focus on creating more large sanctuaries. “I love these animals dearly,” he says. “But I don’t want to see anybody get so obsessed with saving these urban prairie dogs that we miss the bigger picture.”

An urban prairie dog’s value goes beyond its ecological role or potential ability to seed larger populations. “In another sense,” Hoogland says, the animals are “extremely important because this is the only way some people see prairie dogs.” There’s a lot to be said for the fuzzy feeling of watching the round, animated creatures stand atop their burrows and call out to each other. Their characteristic yipping—which is why they’re called prairie dogs—is part of one of the most sophisticated animal languages out there. In one analysis, they could even tell their family and neighbors if a tall human wearing blue, or a short human in yellow, was approaching. And, Glowacki adds, “They’re cute!”

Ultimately, advocates believe prairie dogs are worth saving no matter their value to humans or to the grassland food web. Helen Taylor, who started Northern Colorado Prairie Dog Advocates to protect the animals in her own backyard, says, “They still have their own inherent value as communal, smart, interesting animals.” And protecting even small colonies could be an important tool in changing their public image. “Every time we do a relocation we have this amazing opportunity to educate the public and help chip away at these myths that have played such a huge role in people feeling like they can say [prairie dogs] don’t matter.”