The International Geophysical Year opened the door for American scientists to launch Earth-orbiting satellites with the goal of exploring solar... 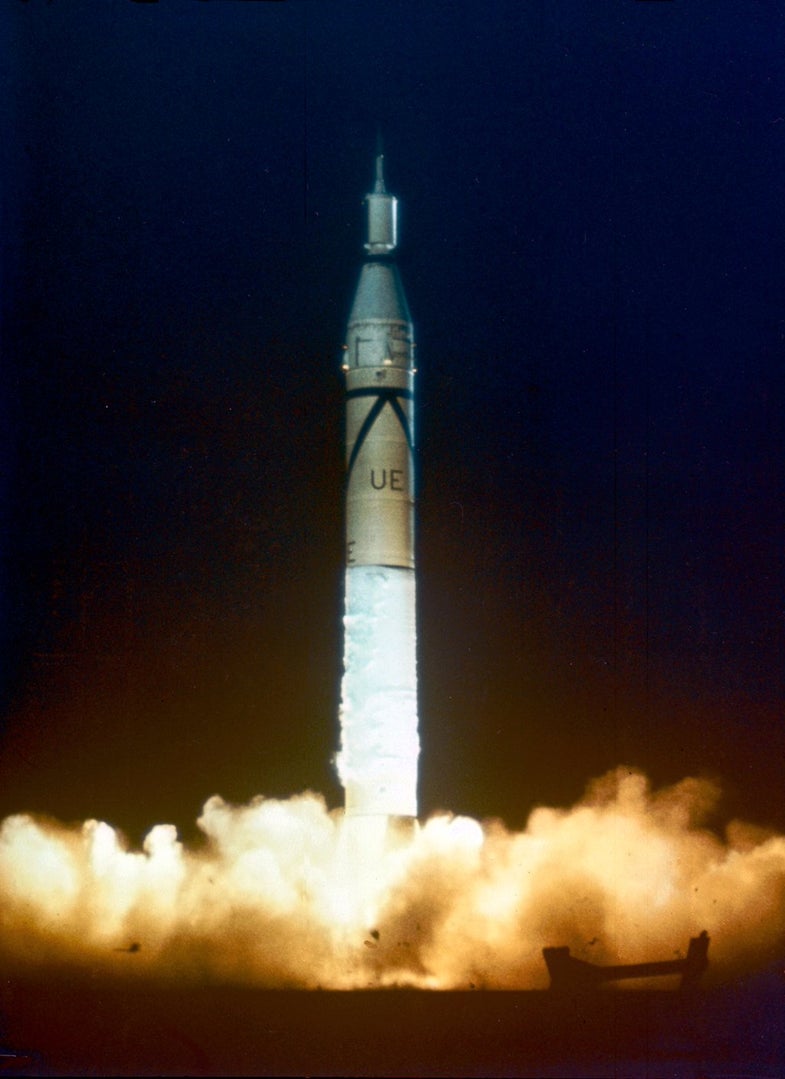 The International Geophysical Year opened the door for American scientists to launch Earth-orbiting satellites with the goal of exploring solar and geophysical phenomenon. But the Soviet Union got there first with Sputnik’s launch on October 4, 1957, and America’s response on December 6 failed spectacularly. Luckily, Wernher von Braun and the US Army had kept a satellite-ready rocket in storage, one they pulled out to help America recover from the sting of Vanguard’s failure. 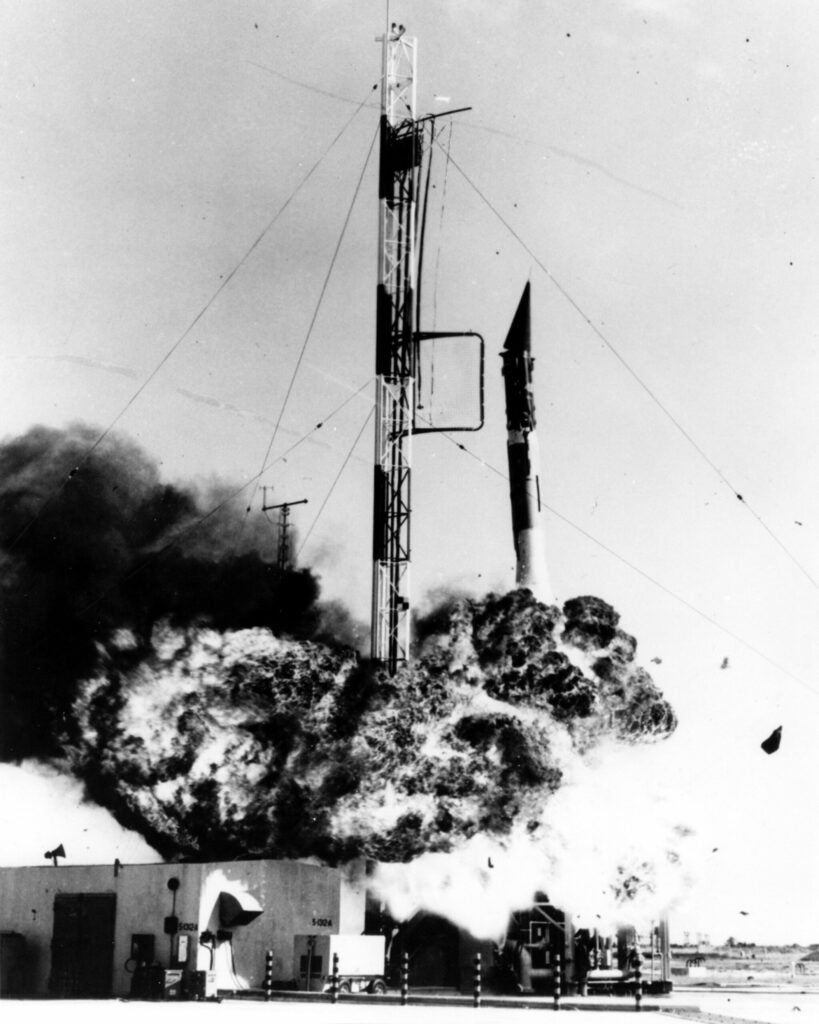 The United States announced its intention to launch a satellite as part of the IGY with an announcement from the White House on July 29, 1955. But Wernher von Braun, the former Nazi rocket scientists now working for the US Army, had already proposed a satellite program to the Assistant Secretary of Defense six months earlier. Called Project Orbiter, it wasn’t the long-term program of von Braun’s dreams. It would be a quick way to put a small satellite into orbit, as much a scientific endeavour as a psychological one; he knew the first nation into space would have an advantage in the space age he saw just over the horizon.

The Orbiter satellite would launch on a four-stage rocket, the first stage would be one of von Braun’s Redstone missiles and the upper three stages would be clusters of solid Loki II-A rockets developed by Caltech’s Jet Propulsion Laboratory. With each stage firing as the one below it cut out, the satellite would enough momentum to leave the Earth’s atmosphere.

But the Army wasn’t the only military service keen on bringing America into the space age. Another strong contender was the US Navy whose Project Vanguard proposed using a two-stage launch vehicle based on the Viking sounding rocket to put a modest satellite into orbit. The US Air Force submitted two proposals similar proposals using intercontinental ballistic missile topped with sounding rockets as upper stages to launch small payloads.

Selecting America’s first satellite program fell to Donald Quarles, a member of the National Advisory Committee for Aeronautics who was also the Assistant Secretary of Defense for research and development and Secretary of the Air Force. Quarles in turn appointed an eight-man committee. Chaired by JPL’s Homer Joe Stewart, the so-called Stewart Committee was composed of two representatives from each military branch and two men from Quarles’ offices. 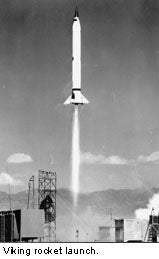 The Committee recognised that Project Orbiter had the likeliest chance of success, in large part because it was the only proposal with actual hardware to back it up. But the committee also couldn’t ignore its ties to both Nazi weaponry and the American military. The Redstone was an offensive intermediate-range ballistic missile based on Nazi V-2 technology and backed by a former Nazi.

The Air Force proposals were in a similarly poor position. Not only were proposed launch systems based on offensive missiles, those missiles only existed on paper for the moment. It seemed somewhat unlikely that these rockets would be ready to launch a satellite within the timeframe of the IGY. A third strike against the Air Force was its ongoing reconnaissance programs that would do well without resources and personnel reassigned to yet another project.

Vanguard was different. Though it too existed mostly on paper at the time, the Viking first stage was an American-made sounding rocket that had no use as an offensive weapon. The Navy’s proposal alone promoted the idealistic notion that science was a peaceful undertaking with relatively few military connections.

Stewart put the decision to a vote on August 3, 1955. There were three votes for Vanguard, two for Orbiter, one absent member who forcibly abstained from voting, and two members whose lack of familiarity with missiles led them to side with the majority. Vanguard would be America’s first satellite program.

A US Army Redstone missile

When von Braun heard the decision, he was shocked, and his ire only increased when he learned that the absent member, Professor Francis Charles McMath from the University of Michigan Observatory, was partial to Project Orbiter. The engineer couldn’t help but wonder whether McMath’s attendance would have swayed the undecided voters to favour the Army’s proposal. Von Braun set about revising the Orbiter proposal in the hopes of changing the Stewart Committee’s collective mind, but they remained steadfast in their decision.

But von Braun did find a sympathetic ear in Stewart himself. The two men shared a conviction that the unproven Navy system would ultimately fail and the burden of a satellite launch would eventually fall to the Army. Army Ordnance agreed. And so the pair conspired to retain Project Orbiter’s capabilities though under a different name, putting their faith in the convoluted bureaucratic labelling system to camouflage their secret.

Orbiter was revised to use scaled-down Sergeant rockets rather Lokis for the three upper stages with an elongated Redstone as the first stage. It was a configuration that could put a satellite in orbit, or with a dummy fourth stage it would be a perfect system to test different reentry materials. Five missiles were diverted to this “reentry test program,” including Redstone missiles RS-27 and RS-29. If the Navy failed and the Army was called on to launch a satellite, these rockets could be reconfigured for the job in less than three months. 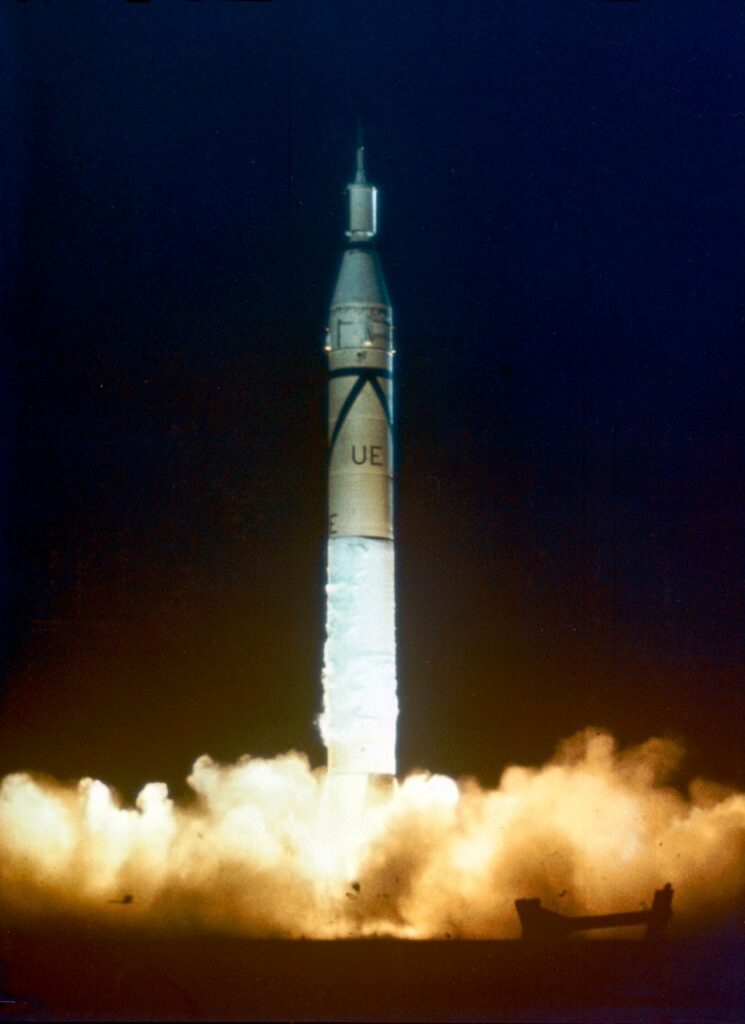 In September of 1956, RS-27 was redesignated Jupiter C, Jupiter to imbue it with the priority of the Army-Navy rocket program as the same name and C denoting the launch as a composite reentry test flight. Early in the morning of the 20th, the rocket rose from the launch pad, reached a top speed of 13,000 miles per hour, and covered a distance of 3,350 miles on its short flight. The dummy fourth stage was lofted to a peak altitude of 682 miles. It was clear that had the fourth stage been active it could have put a satellite into orbit. Von Braun’s system worked.

RS-29 stayed in storage for more than a year. On October 5, 1957, the day after Sputnik reached orbit, General Bruce Medaris, commander of von Braun’s Army Ballistic Missile Agency in Hunstville, Alabama, told the German engineer to quietly start getting the rocket ready for launch. Vanguard was on deck, and still certain the Navy would fail, Medaris wanted to Army to be ready to step in an save the day. 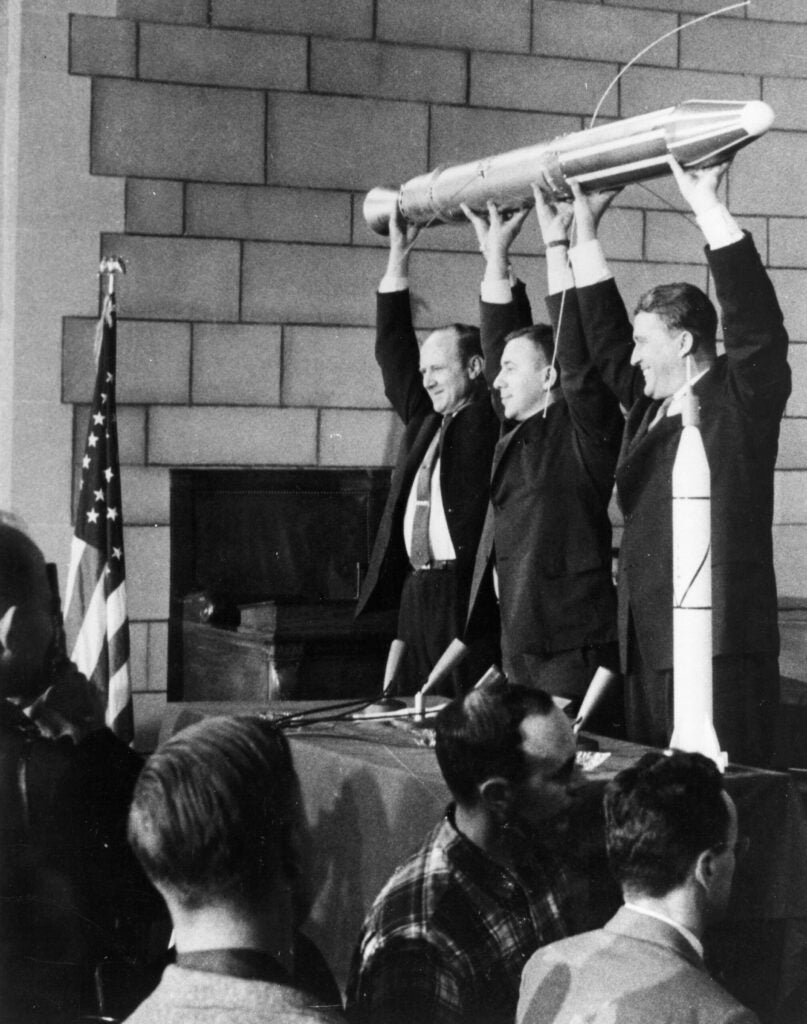 And fail it did. On December 6, 1957, The Navy’s Vanguard rocket with the small TV-3 satellite ensconced in its nose cone rose a few feet from the launch pad before losing thrust and settling back down. In the process, it fell against the launch structure, which ruptured its body and the tanks inside it, setting the whole area ablaze.

The failure gave the Army a tiny launch window, just three days beginning on January 29, 1958; in the meantime the Navy retained control over the Cape Canaveral launch site. The Army moved RS-29 to Florida and started preparing for its mission, and when the launch window opened the rocket was erected on the launch pad. Late on the evening of January 31, the rocket, renamed Jupiter C like its mate, rose off the launch pad and sent the diminutive Explorer 1 satellite into orbit.