This robotic hawk can shape-shift as it flies

The drone was inspired by the northern goshawk, a bird known for its agile hunting skills. 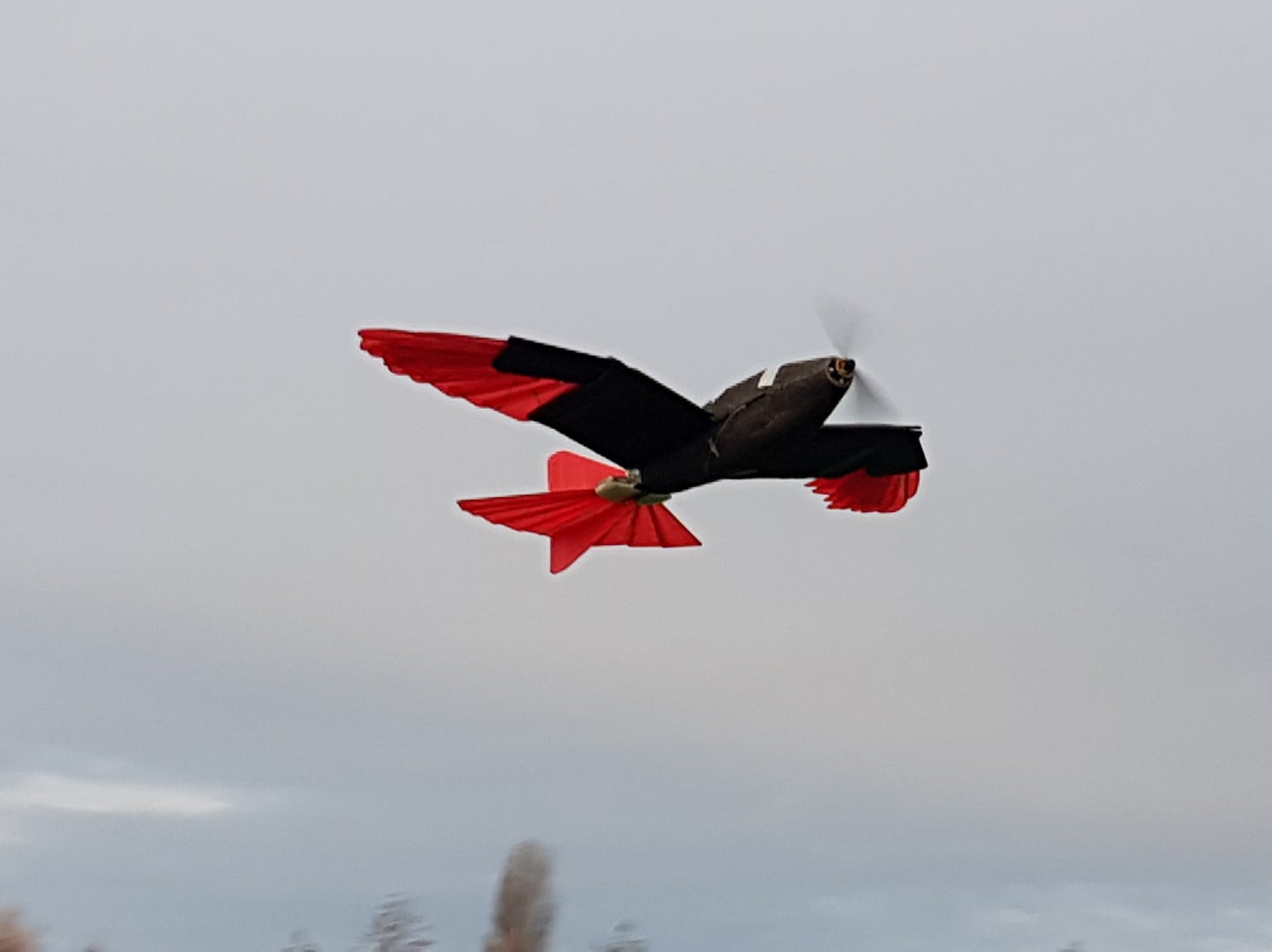 Drones are common enough that it’s easy to picture their basic design variations. Fixed-wing drones look like miniature airplanes. Others use propellers—typically four of them—to pull themselves up into the sky, kind of like helicopters. A few drones combine those ideas by using props to get off the ground and then rotating position as they fly, so the sides of the drone can act like wings and provide lift. Amazon’s package delivery drone does this, and so does a big cargo carrier from Bell.

Now picture how a bird soars through the air, with all the ways that its wings and tail can move. Biological flight like that feels pretty different from the way those other gadgets whiz around. But engineers in Switzerland have unveiled a robotic bird that emulates the way a hawk flies. Their results are published today in the journal Science Robotics.

Their goal was to create a bird-like drone that’s capable of both cruising long distances at high speeds (like a fixed-wing plane) while remaining highly maneuverable. Their creation was inspired by a real bird called the northern goshawk.

“This bird hunts in forests, so it’s super agile,” says Enrico Ajanic, a doctoral student and roboticist at the Swiss Federal Institute of Technology in Lausanne. They wanted to be able to determine: “Why is this northern goshawk so agile? But at the same time, [it] can also be quite efficient—it’s also a migratory bird.” By creating a robot that can accomplish those varied flight goals, Ajanic says they can make a flying machine that’s the best of both worlds.

A drone that could do that, he argues, would be fantastic at cruising through an urban environment. “Big cities require a drone which can fly long distances, so you have to be very efficient,” he says. “But at the same time, you also need to avoid obstacles, because these cities are cluttered.”

The result is a creation made from carbon fiber and other materials that’s called LisHawk. At its largest, the wingspan is 3.4 feet across. In some ways, the robo-hawk is a lot like a real northern goshawk. Its tail, which can fan outwards, is about the same length—around .8 feet. And the outer portion of its wing (called the chord) is about a foot long, roughly the same as its biological counterpart. The wings can extend outwards or tuck inwards. The tail can fan out, and move up and down and side-to-side. That morphing ability gives the LisHawk the ability to widen the spectrum of the type of flying that it’s good at; a typical drone can’t morph like that.

There are challenges, though, with trying to duplicate nature with artificial materials. The main one is that the robotic hawk doesn’t flap its wings—it uses a propeller. “The propeller is quite efficient, and from a mechanical engineer point of view, it’s a simple system,” he says. A drone that flapped its wing would be difficult to create, and picturing the opposite scenario is just funny: a bird with a propeller sticking out of its beak.

Overall, Ajanic is pleased with how well they accomplished the goal of creating a shape-shifting, bio-inspired aircraft. He says that tech like this could be used with other drones to “improve their flight performance.”

For fast cruise flight, he says the ideal configuration is with the wings and tail tucked inwards, a position in which the minimum speed is 17 miles per hour. For slower but more agile flight, the speed decreases to 9 mph, with the tail and wings extended. Changing wing shape in the air that way in aviation is a rarity: planes like the F-14, the fighter jets from the original Top Gun, did it.

The LisHawk follows in the feathery footsteps of a similar robo-bird called the PigeonBot, which debuted back in January. Unlike the PigeonBot, this robot-hawk doesn’t use actual feathers from a real bird—Ajanic’s team devised an artificial solution.

Realistically, we’re unlikely to see hawk- or pigeon-like robots zipping through cities anytime soon, if ever—fixed-wing drones and quadcopters remain the industry norm, and rural areas are safer settings for them, and a better flight area from a regulatory standpoint. But that doesn’t change the fact that a robotic creation that finds its inspiration in biology is, to put it simply, very cool.