It’s like an electric air taxi, but for cargo, not humans. 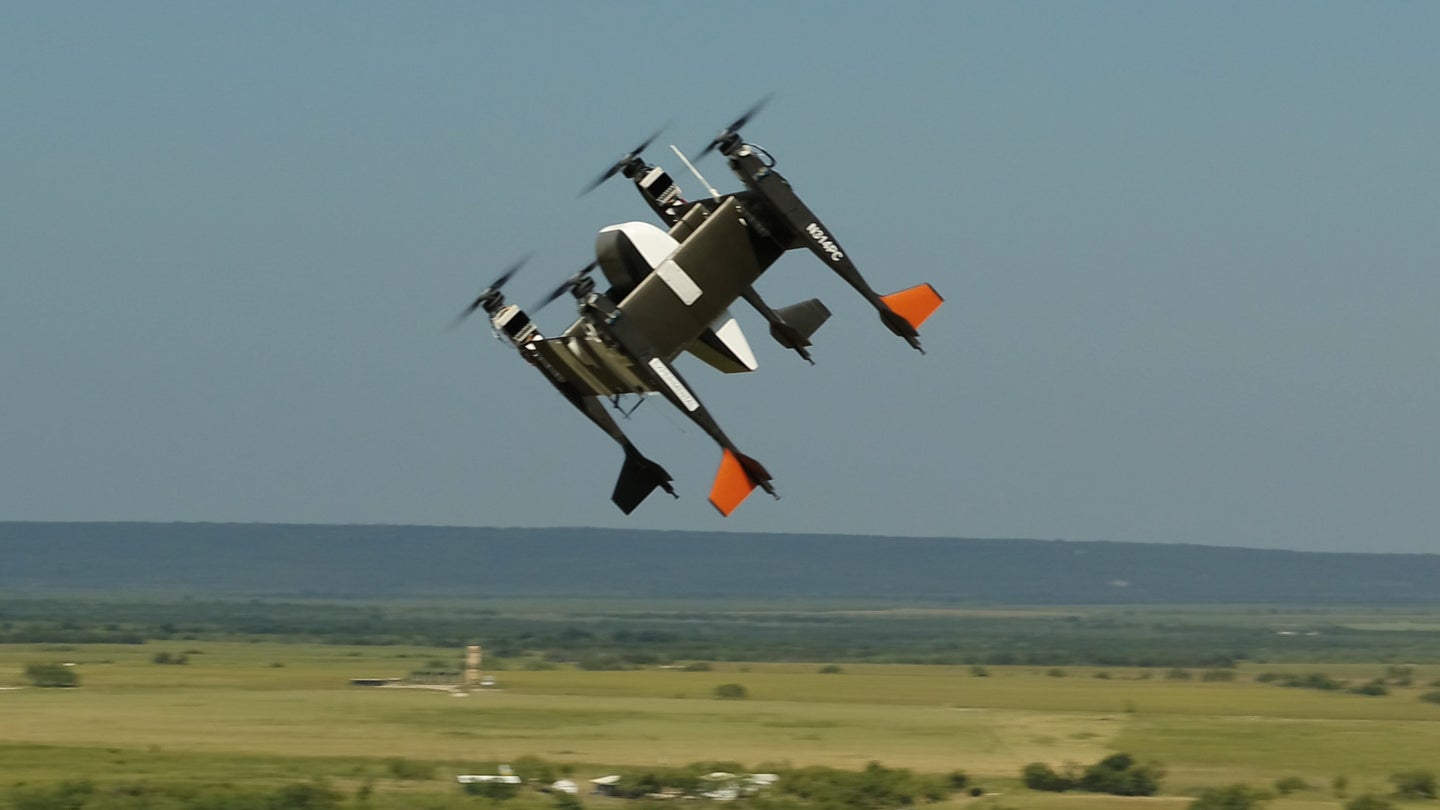 A typical quadcopter drone is a small gadget that uses four propellers to take off and land vertically, like a helicopter. And at first glance, a cargo-carrying drone from Bell called the APT 70 looks a little bit like one of those flying machines—until you learn that it stands 6 feet tall, spans 9 feet wide, and can carry a 70-pound payload a distance of 35 miles.

It’s not the kind of drone designed to drop packages in your yard. Instead, Bell sees it as a machine that could carry military gear, medical supplies, industrial components, and tools, or help a delivery company like Japan’s Yamato with logistics. This machine first flew late last year, but earlier this month conducted a flight that demonstrated its autonomous capabilities—executing maneuvers on its own like automatically converting to horizontal flight, then back to vertical flight, at the right times.

Besides its size, the APT 70 (which stands for “autonomous pod transport” and notes the number of pounds it can schlep) has another capability that truly separates it from a regular drone: It’s actually a biplane. When flying, it positions itself parallel to the ground, so the four propellers pull it through the air and the two wide main surfaces serve as wings. Those wings give it lift as the air passes over them, meaning that the propellers demand 50 percent less power when the drone is flying horizontally.

“The drone is what we call a tail-sitting biplane,” says Scott Drennen, vice president of innovation at Bell.

In short: This machine takes off and lands like a helicopter, flies like a plane at speeds of over 100 mph, and does so by shifting its entire position in space. (And it’s a “tail-sitting biplane” because before takeoff and after landing, it’s like an airplane that’s parked pointing straight up, on its tail.)

The white and black pod in the middle is where the cargo goes, and the aerodynamic shape of that compartment reduces drag while also giving the craft a little lift.

In the current configuration, that means that the cargo in the pod is going to change its orientation throughout the flight in a way that you wouldn’t want to experience if you were a passenger. (In other words, don’t ship a game of Jenga this way.) The pod starts off vertical, then becomes horizontal, then vertical again for landing. “It’s not the most ideal configuration for people transport,” Drennen says—but that’s not the mission his company has in mind for this drone. Drennan adds that they do have a design that could keep the pod positioned with a consistent orientation, if needed.

The drone is also smart enough to take wind direction into account: For example, when transitioning into horizontal flight like a plane, it positions itself and its wings to face the wind, just like a regular airplane uses the breeze to maximize the lift its wings generate at takeoff and landing.

The drone is somewhat conceptually similar to the V-22 Osprey aircraft, also made by Bell (and Boeing), which takes off and lands like a helicopter and flies like a plane. But that aircraft has large pods on the ends of the wings that swivel around with rotors, so the fuselage itself (and the crew in it) stay level.

While the APT 70 isn’t designed to carry people, of course, it is in a broader category of craft called eVTOLS (electrical vertical take-off and landing craft) that are, and could someday serve as air taxis that whisk people around cities. Many companies are working in this space—among them are Boeing and a vehicle called the PAV; Lilium and a small, futuristic-looking jet-like craft; Jaunt, which has plans for a helicopter-like vehicle; and Bell itself, whose air taxi concept is a hybrid called the Nexus. (And check out this weird-looking Volocopter flying around an airport!)

It’s unclear just when people might be able to catch rides in eVTOLS, but Bell’s new cargo carrier is a good demonstration of using the technology to transport non-living goods. Next year, Drennen says, they plan to add more sensors to the drone and take it on it on a more ambitious flight through the Dallas-Fort Worth area.