Honeycomb Drone Swarm Can Fly In Any Shape

Happily, these drones are for educational (not killer) purposes. 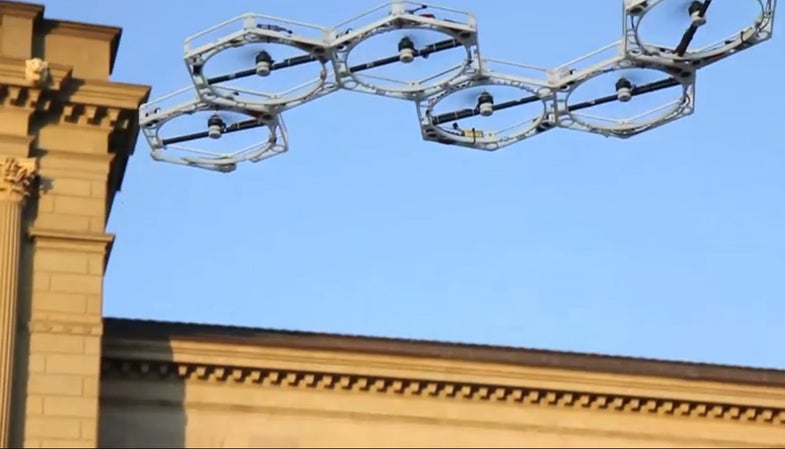 These honeycomb-like drones use advanced networking technology to fly smoothly in large formations. Created as a teaching aid by researchers at ETH Zurich, the Distributed Flight Array consists of at least two modules, linked physically by magnets and electronically by push-pin connections.

Curiously, a single unit cannot fly on its own. The torque from a single rotor is unbalanced, and sends the drone tumbling erratically. Once connected, the units all take off as one, using their rotors, and then fly level to the ground, with sensors providing information about inertia and altitude. A human pilot steers the formation with a joystick.

Another version of the drone swarm, designed by the same Swiss team, uses latches instead of magnets and infrared signals instead of metal pins, but otherwise works the same way. To land, the formation turns off its rotors, and the individual units fall to the ground.

The point of the project was to demonstrate how distributed networks function. Distributed networks involve communication and processing tasks shared by many identical parts. Each module in the flight array records its own position and communicates that with all the others, then adjusts the strength and direction of rotor spin to balance out the whole array. (Read more about why coordinated swarms of robots are the future of flight.)

Here are the drones in action:

Here they are testing many possible configurations: