Everything we know about the new airplanes in ‘Top Gun: Maverick’

Fighter jets have come a long way since the 1986 original. This is what to expect from the aircraft in the new one. 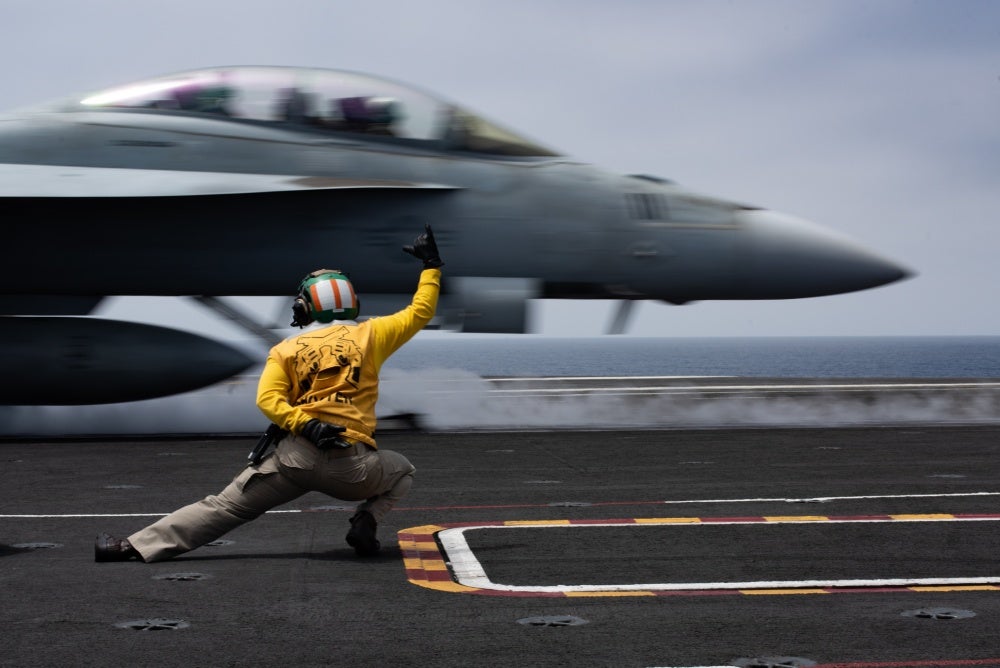 If you’ve watched the original trailer—and fans have viewed it tens of millions of times—for the forthcoming Top Gun: Maverick, then you’ve seen scenes of Tom Cruise rocketing off an aircraft carrier and fighter jets cruising in close formation over the water. Those airplanes in that trailer, with one exception, are F/A-18 Super Hornets, a far cry from the jets Maverick and Goose flew into the danger zone in the 1986 film. Those were F-14 Tomcats, big, beloved, tough, fast airplanes the Navy no longer flies.

The difference between those jets represents the technological gulf between aircraft the Navy first deployed in the early 1970s and fighters that began flying on and off carriers in the early 2000s. An important, plot-thickening distinction: the Super Hornets don’t require a dedicated radar operator and navigator. Goose is now optional; his precise job doesn’t exist anymore.

We spoke with former naval aviators and actual Topgun—that is, the US Navy Strike Fighter Tactics Instructor program—pilots to learn about the differences between them, and what it’s like to turn and burn in these metal birds.

The original Top Gun, and the aircraft in it, were a product of the technology and geopolitics of its time. The Tomcat was built with a specific purpose in mind, says Vincent Aiello (call sign: Jell-O), the host of the Fighter Pilot Podcast and a former F/A-18 Hornet and Super Hornet pilot and Topgun instructor. The Tomcat was a large airplane with a big radar, and it carried a powerful weapon, the AIM-54 Phoenix air-to-air missile. (Update on December 16, 2019: Paramount released a new trailer. Aiello breaks it down, in detail, here.)

“The F-14 was designed for fleet defense during the Cold-War scenario of Soviet bombers attacking the carrier strike group,” says Aiello. The F/A-18, on the other hand, was designed to “be good at a myriad of things.”

The way that aviators operate the jets has changed, too. The biggest difference noticeable to people who watch the films is that the number of people it takes to make the jets fly is different now. In Top Gun, Goose was the RIO, or “radar intercept officer.” And operating that radar took a lot of work. “The radar interface for the aircrew was so intensive that it took someone with a dedicated effort to optimize the radar and detect other aircraft,” says Aiello.

Then there was the computing power on the aircraft—or lack thereof. “It was a Commodore 64 with wings on it,” John DePree (call sign: Cosmo), said on an episode of the Fighter Pilot Podcast focused on the F-14. For example: the mission computer loaded off of magnetic tape.

That magnetic-tape computer had so little memory that its crew had to switch programs depending on what the jet was doing at the moment—the RIO would hit a switch to bring up the bombing program, and then after the bomb-dropping ended, they’d reload the air-to-air program, remembers David Culpepper (call sign: Chili), who flew the Tomcat for nearly a decade.

The computer was old, and the plane was big: Culpepper remembers that when taxiing, it “drove like a truck.” The F-14 had a wingspan of 64 feet. The Tomcat’s replacement, the F/A-18 Hornet and the bigger, newer variants known as Super Hornets, have a wingspan of 40 and nearly 45 feet, respectively. And the Tomcat’s top speed was faster: it’ll hit 1,544 mph, while the Super Hornet goes a pokey 1,190 mph.

Today, the aircraft in the trailers for Top Gun: Maverick are Super Hornets (nickname: the Rhino), and gone are the days of the RIOs. (If you watch the first trailer, the plane at the very end is a Tomcat, possibly present thanks to CGI magic.) The radar system is improved enough that the pilot can fly the plane and use the radar at the same time, no Goose needed.

Super Hornets come in two variants: a single-seater and a two-seater, meaning that unlike a Tomcat, which engineers designed around a two-person crew, a pilot can fly an F/A-18 all by themselves. The two-seaters, technically known as the F/A-18F, can host a “weapons systems officer” in the backseat (abbreviation: WSO, pronounced “whizz-oh”). Alternatively, that backseat can be outfitted with all the controls a pilot would need to fly the Super Hornet.

This is presumably a huge perk for filming. Paramount could put Tom Cruise and other actors in the Rhino while a real Navy pilot is in charge of the plane from the front seat. That wasn’t possible with the Tomcat, which never had the pilot’s controls in Goose’s seat. (Indeed, a document posted here states that Paramount and the Navy arranged to have the actors ride in the backseat of F/A-18s—although simply riding in a fighter jet, and enduring the Gs it generates, is very arduous, as I personally can attest to.)

Gone, of course, is the computer with magnetic tape: the Super Hornet has six solid-state computers on board. And a display on the Super Hornet now is touch-sensitive, so it’s more like an iPhone than a Commodore 64.

While the Tomcat is powerful, the Hornet and Super Hornet are more agile. If an F/A-18 and F-14 were to fight, the former would have an advantage in that realm. “I can attest to that personally,” says Aiello. And with a modern aircraft comes a plane easier to fly: the Tomcat was challenging to fly well, while the Hornet is easier to be good in, says Culpepper.

The Hornets and Super Hornets may be known for finesse, nuance, and ergonomics, but the Tomcat was known for toughness, speed, and acceleration. “The F-18, while very capable, and extremely competent in its own right, doesn’t quite have the same bad-boy image as an F-14,” Aiello reflects.