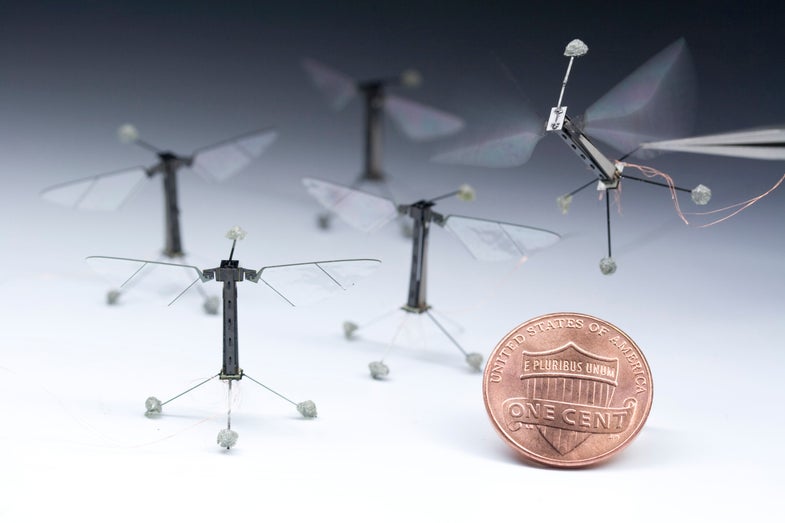 When given the choice between sinking and swimming, these RoboBees will swim every time.

We first wrote about Harvard scientists’ invention of robotic bees back in 2013. In some ways, not much has changed. The bees are still leashed to their power supply, too small to carry onboard computers and batteries. But in the past two years, they’ve picked up a new trick: they’ve learned how to swim.

The bees are so small and light that the surface tension of the water prevents them from delicately sinking into a glass. But the researchers found that if the bees cannonball into the water, they turn into very happy swimmers. As it turns out, moving through the air and moving through water aren’t that different for the RoboBees—they simply flap their wings more slowly underwater.

Needless to say, real bees and water don’t mix quite as well, and though RoboBees and real bees are similar sizes, they still have very different functions. Robot bees may one day be capable of pollinating crops, but that day is at least 20 years in the future.

For now, the researchers are focused on expanding the RoboBee’s basic capabilities, including new tricks like swimming. And even if we got to a point where RoboBees were able to pollinate crops, the robotic option would remain far more expensive than the natural, biological source of inspiration.

In the absence of good robot alternatives, researchers are still focused on saving bee populations, which have been in decline for the past several years. Looking into a whole host of scientific research from conservation methods, to bee illnesses, and alternative pollinators, means that we probably won’t have to rely on RoboBees to pollinate our food anytime soon. But they’re still incredibly cool.