Amazon is one big step closer to delivering packages by drone

What the FAA’s recent decision means for the prospect of your orders arriving from the sky. 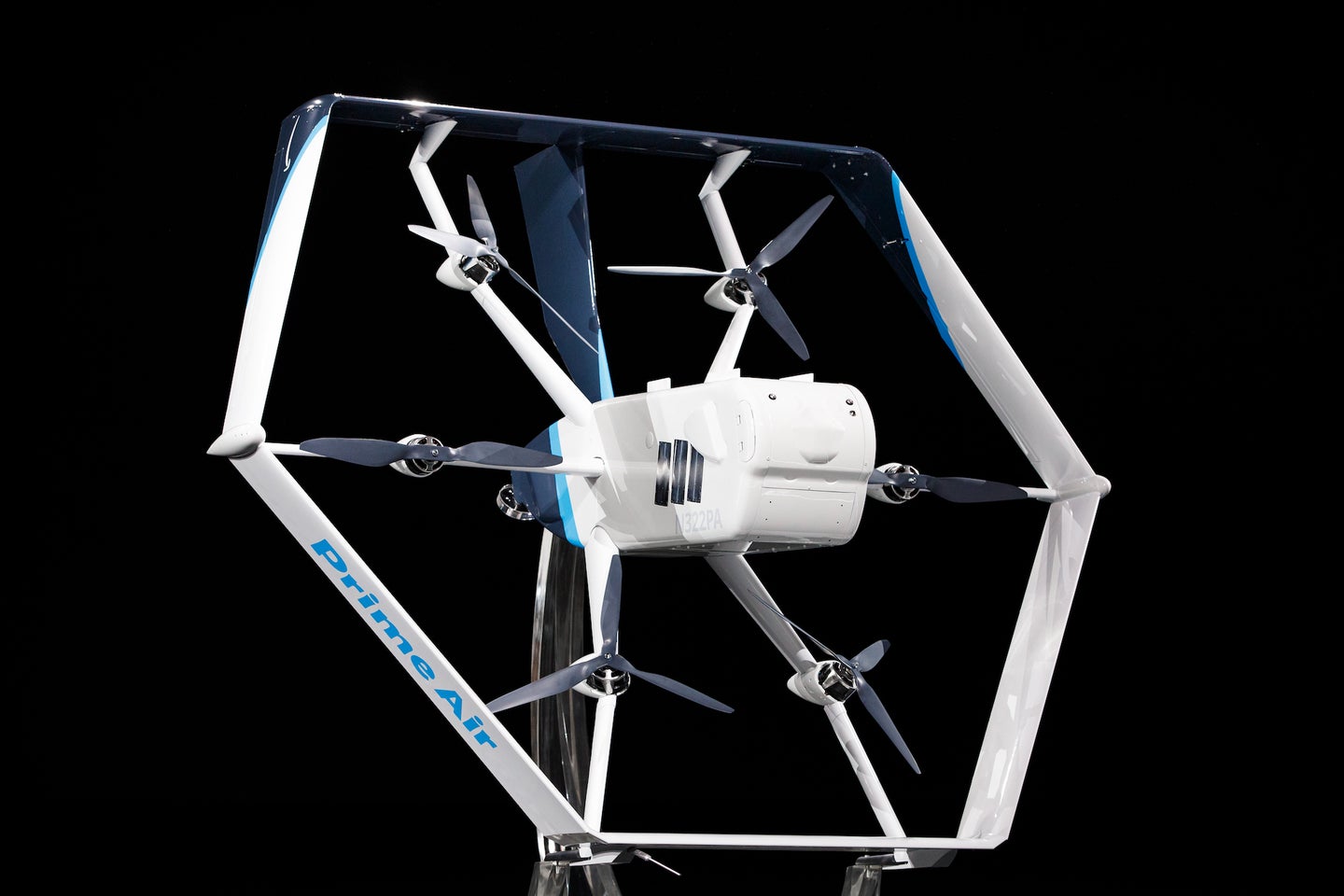 The MK27 drone that Amazon is planning on using for its package-delivery testing. Amazon
SHARE

For years, Amazon has envisioned deploying drones to deliver packages to customers’ yards. In the company’s plan, an electric aerial vehicle would take off from a distribution center, cruise some 15 miles or less, and deposit whatever small item an American consumer wants faster than they can say, “Alexa, send me Air Jordans, but do it via the air.” (Technically, Amazon aims for the drone deliveries to take half an hour or less.)

In late August, the Federal Aviation Administration gave the company a green light to keep pushing the program forward in the national airspace; read more about the details in this FAA decision document.

Amazon calls the service Prime Air, and it relies on a drone known as the MK27, which Amazon showed off last year. Like many other drones, it employs multiple propellers that allow it to take off and land vertically, but this one pulls off an additional trick. While in cruise flight, it pivots so that the propeller shrouds become wing-like, giving the craft an aerodynamic boost as it flies more like a fixed-wing aircraft than a helicopter. That’s similar to a configuration that a much bigger cargo drone from helicopter-maker Bell uses, which can carry a whopping 70 pounds. But the Amazon concept is rated for cargo that’s lighter than 5 pounds, so it would be bringing items that are more likely to be running shoes than dumbbells.

That may not sound like much weight, but that sub-5-pound weight class actually “represents between 75 and 90 percent of the packages that Amazon delivers today,” Jeff Wilke, an Amazon executive, said last summer.

The intersection of delivery drones, airspace regulation, and a behemoth of a company like Amazon (which is less accustomed to building flying machines than, say, Boeing) is both complex and controversial. But Ryan Wallace, an assistant professor at Embry-Riddle Aeronautical University and expert in drone public policy, welcomes the development. “Many UAS [unmanned aircraft systems] operators, particularly in the commercial space, have been frustrated with the pace, or the momentum, of regulatory change,” he says. “I think this is a very positive indication that the FAA is starting to be responsive to the industry’s push forward.”

He adds that Amazon’s work will help others in the sector. “Honestly, they are blazing trails for the rest of us,” he reflects. “In addition to the FAA’s eye being on Amazon’s success, you have the rest of the industry cheering them on from the sidelines.”

Amazon does not have carte blanche to do whatever it wants with the drone deliveries. The FAA’s exemption decision applies to just one specific drone model, and among other restrictions, states that the company cannot fly at night unless they add lights, can’t fly higher than 400 feet, and can operate “only in sparsely populated areas.” In other words, drone deliveries are likely not coming to densely-packed suburbs anytime soon. They also need to have one pilot in charge of one drone—a one-to-one ratio.

The FAA’s decision document also outlined comments made by more traditional aviation-focused organizations or companies, like the Air Line Pilots Association. That group, according to the FAA, “expressed concerns with Amazon’s proposal to conduct its own internal investigations of accidents and incidents and that the petition for exemption implies the investigations would occur without government coordination.”

In other words, delivery by drone is moving forward, but there is still plenty for companies and regulators to get straight. But for now, the news is a victory for Amazon—or anyone who is excited about a potential future where their orders arrive from the sky.

“This certification is an important step forward for Prime Air and indicates the FAA’s confidence in Amazon’s operating and safety procedures for an autonomous drone delivery service that will one day deliver packages to our customers around the world,” David Carbon, the vice president for Prime Air at Amazon, said in a statement. “We will continue to develop and refine our technology to fully integrate delivery drones into the airspace, and work closely with the FAA and other regulators around the world to realize our vision of 30 minute delivery.”