Video: MIT-Designed Glider Can Land Gracefully on a Perch Like a Parakeet

Move over, hovercraft. This airplane can perch, bird-style, on a power line. Using computer algorithms, MIT researchers have designed a... 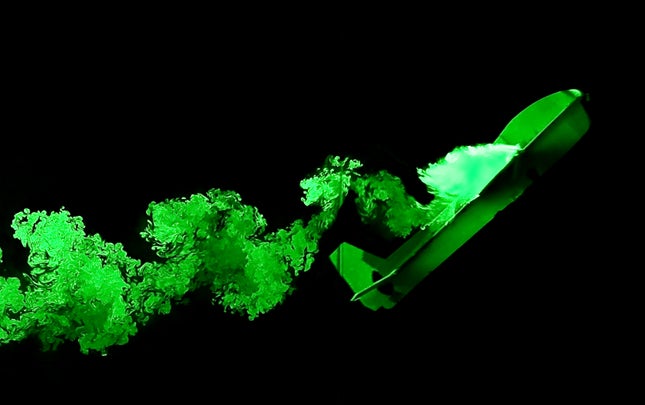 This smoke visualization shows the vortex wake of a glider in stall. MIT
SHARE

MIT researchers built a glider that can land like a bird.

Move over, hovercraft. This airplane can perch, bird-style, on a power line.

Using computer algorithms, MIT researchers have designed a foam glider with a single motor on its tail that can perch like a bird. The work has implications for robotic planes, potentially allowing them to recharge their batteries by perching on power lines, according to MIT News.

Watch a bird careening through the trees, and you might wonder how it can suddenly stop and alight on a single branch. There are certainly no flying machines capable of such aerobatics.

It’s because birds take advantage of a phenomenon called stall — not a word you usually want to hear in aviation.

Birds come to a stop by tilting their wings back at sharp angles. This creates turbulence and large, unpredictable whirlwinds behind the wings. If an airplane pointed its wings up in this way, it would lose lift and fall out of the sky. But MIT researchers wanted to take advantage of stall — specifically, post-stall drag — to help a plane come to a controlled landing.

It’s difficult to predict how the wing whirlwinds will manifest, so MIT Associate Professor Russ Tedrake, a member of the Computer Science and Artificial Intelligence Laboratory, and Rick Cory, a PhD student in Tedrake’s lab, had to model what a stall looks like.

They also found they had to create error-correction controls to tweak the glider’s path in case it deviated from its flight plan. Using algorithms developed at MIT, they were able to calculate the degree of deviation that the controls could compensate for, MIT News says. The result is a model that looks like a series of tubes, which includes all the possible trajectories and the tolerance of the error-correction controls.

Once the glider is launched, it keeps checking its position and executing the command that corresponds to the flight path “tube” it is in.

To stop, it tilts itself up in a dangerous-looking stall and wafts forward, ultimately reaching a tiny perch, where it alights.

The team used wall-mounted cameras and an external computer to monitor the glider’s position and run the control algorithms. To expand the technology to robotic airplanes that interest the Air Force, more powerful on-board processors would be needed. Meanwhile, Tedrake’s lab has already begun to address moving the glider’s location sensors onboard, according to CSAIL.