Video: DARPA’s Nano-Hummingbird Spy Drone Can Fly For Eight Minutes And Perch On Your Sill

A year and a half ago, we saw our first look at DARPA’s hummingbird drone, a teeny robotic spyplane inspired... 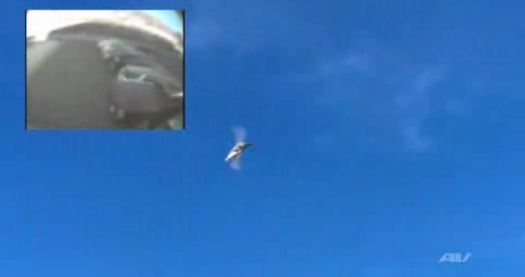 A year and a half ago, we saw our first look at DARPA’s hummingbird drone, a teeny robotic spyplane inspired by the mid-air dexterity of the hummingbird. But now we’ve got a video of the drone in action, much more capable and with the ability to do its acrobatics for much longer.

The drone, built by AeroVironment with funding from DARPA, is able to fly forwards, backwards, and sideways, as well as rotate clockwise and counterclockwise. Not only does the ‘bot resemble its avian inspiration in size (it’s only slightly larger than a hummingbird, with a 6.5-inch wingspan and a weight of 19 grams), it also looks impressively like a hummingbird in flight. That’s not vanity–it’s key to the drone’s use as a spy device, as it can perch near its subject without alerting it (supposing that area has a population of hummingbirds–the usual reaction to seeing a hummingbird here in midtown Manhattan is something like “OMG you guys look at the hummingbird!!!!!!,” which is not necessarily an ideal situation for a spy-drone).

The drone can currently fly for about eight minutes, impressive considering that range was only 20 seconds a short two years ago. But the engineers aren’t satisfied, branding the current drone a prototype and continuing to work on it. Within a decade, says AeroVironment’s project manager, this drone could easily be counted on to carry out complex and difficult reconnaissance missions.