The 1,500-pound vehicle uses plans and molds from the original rover. 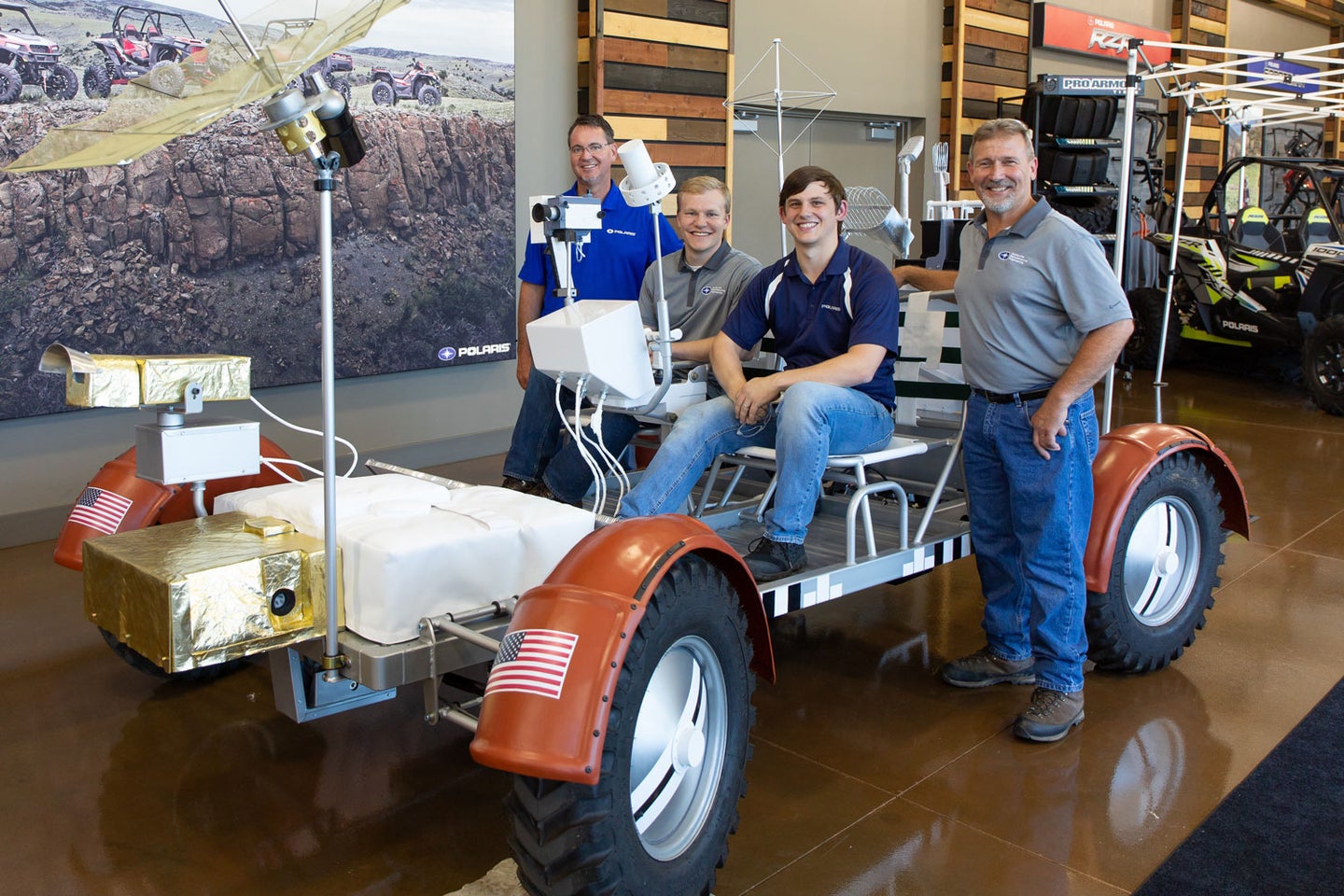 The planet-friendly version of the rover from the Apollo 15, 16, and 17 missions is a chimera of our favorite vehicles. Polaris
SHARE

The original NASA Lunar Roving Vehicle wouldn’t be very much fun to drive here on Earth. Its speed topped out at a paltry 8 mph and, because it was built for the moon’s reduced gravity, it would collapse under the weight of a normal human. Polaris and the US Space and Rocket Center museum, however, built an extremely authentic replica that can get up to 60 miles per hour—if you’re brave enough to drive it that fast.

The project is a tribute to the original NASA LRV, which made its first trip across the surface of the moon during the Apollo 15 mission. It traveled roughly 17 miles over the course of three hours on its first journey, and it remains on the moon. In order to make the replica authentic, Polaris and the USSRC worked with engineers from the original project, including Saverio “Sonny” Morea, who headed up the initial design process during the Apollo days.

Like the original LRV, the Polaris replica has a roughly 10-foot wheelbase, but it’s considerably heavier. The moon vehicle couldn’t weigh more than 450 pounds (which felt like 77 pounds in the moon’s low gravity), but the replica checks in at 1,500 pounds. That extra weight comes from Earth-friendly components like sturdier shocks, which give the replica a total capacity of about 3,000 pounds.

Polaris cherry picked the running components from its other vehicles in order to make the whole thing drivable and serviceable. The power steering from its side-by-side off-road vehicles and the braking system came from the military vehicle division.

Despite the extra power, the rover uses the same control system for driving: a joystick that the team 3D printed, using the original design as a template. “There’s no steering wheel or pedals,” says Brian Ogle, Polaris’s manufacturing manager who worked on the project.

Push the stick forward to accelerate, or sideways to turn. Pulling back on the stick applies the brake, and pulling back even more sets the parking brake. There’s a switch on the center console that enables the reverse gear, which gets more use on Earth than it did in space. “The astronauts couldn’t turn their heads in their space suits to see when driving in reverse,” says Ogle. “They found it easier just to get out and lift up the 77-pound rover and point it in the other direction.”

The amount of acceleration you get out of that stick depends on the settings. For everyday driving, Polaris governs the speed two 12 miles per hour. Unleashed, however, the electric motors can push it all the way up to 60 miles per hour. Polaris is planning to do a lap at an upcoming NASCAR race at the Talladega speedway. There, it will do about 40 miles per hour because that’s the speed required to hold the bank in the corner. The company has some final testing to do on its test track before then.

Tires meant for the moon aren’t exactly amenable to typical road conditions, so Polaris opted for a standard tire model meant for a construction vehicle. “NASA’s tires were made with piano wires and had titanium chevrons riveted into them,” says Ogle. “We wanted something we could get off the shelf if we had to replace one.”

But, even with all of that engineering, the fiberglass fenders over the tire make up one of the most interesting elements of the replica. They’re formed using original molds built for the craft that’s on the moon. “We weren’t sure what to do about the fenders, but it turns out the original molds were in an old warehouse and we could check them out,” says Ogle. “We wrapped them in aluminum foil to protect them from the fiberglass resin. They weren’t easy to get out, but they turned out perfect.”