Here’s what it’s like to drive on the moon

A GM simulator offers the chance to virtually experience what astronauts did for real decades ago—and may do again in the future. 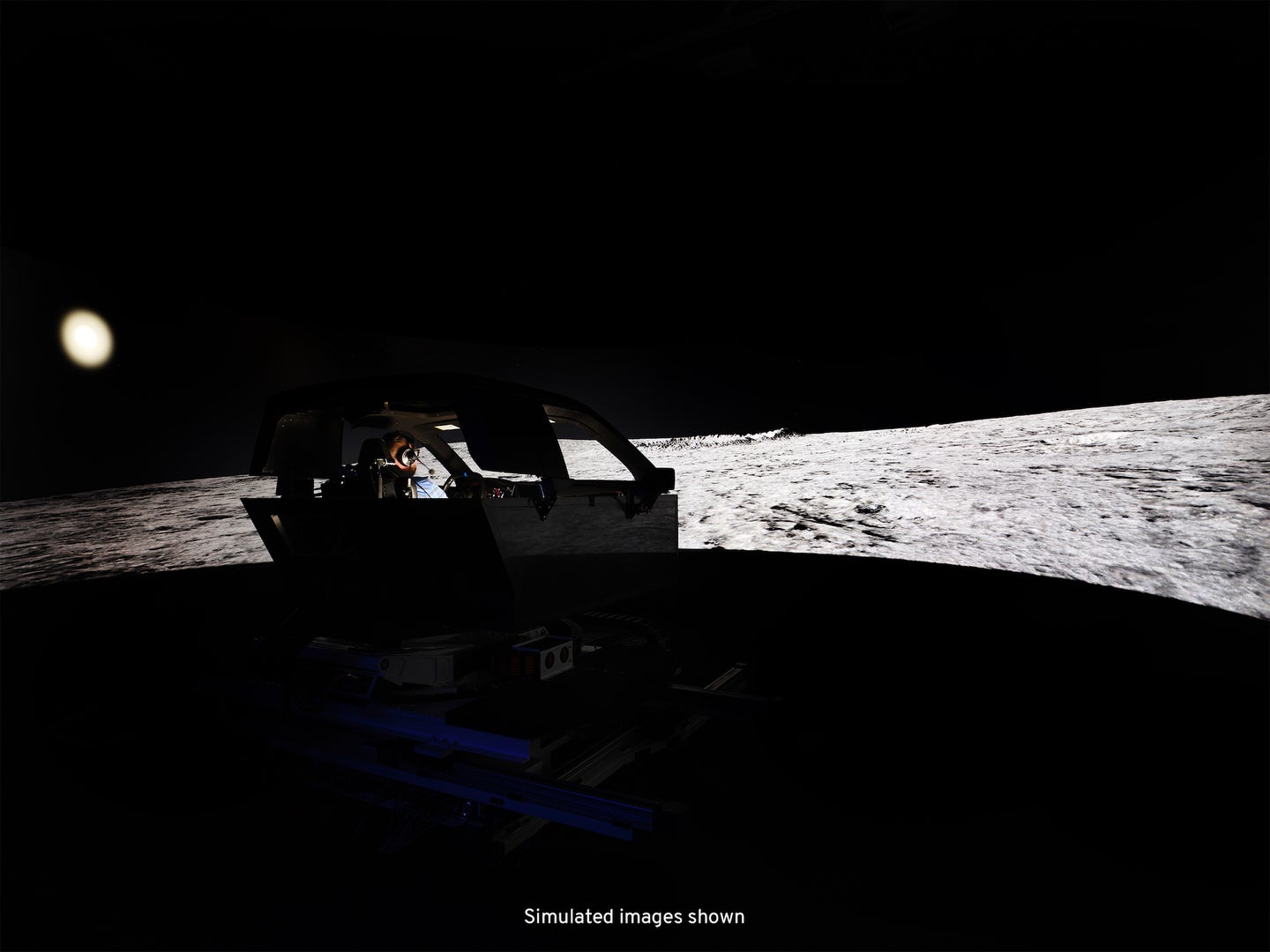 “Driving on the moon is like driving on ice,” warns Jeff Vogt, the advanced program lead for vehicle dynamics at General Motors. “If you can imagine the worst ice storm ever, that is what it is like.”

I was interrogating Vogt in preparation for my turn at the wheel of GM’s lunar rover simulator, an experience that promised to virtually fulfill a dream of mine since I watched the Apollo astronauts as a kid.

The Apollo 17 crew of astronauts Gene Cernan and Jack Schmitt roved the surface in search of geologically significant rocks, a mission made more productive by their trusty 4×4. But the notion of wheeling an off-roader across the pockmarked surface of the moon has been dormant since Cernan and Schmitt blasted off from the moon in the ascent stage of their lunar lander in December, 1972.

A critical development tool in this program is GM’s simulator, which helps engineers test designs for a vehicle that cannot realistically be physically tested on Earth. That’s because of the moon’s weaker gravity, which is one-sixth that of Earth’s. The LMV has all of the 1,500 kilograms of mass it has on Earth, but only one-sixth the weight, which is why traction is so poor on the dusty surface.

I slide behind the simulator’s wheel. The aim is to avoid abrupt moves. No hard starts, stops, or turns. And most especially, take it easy driving out of craters, says Vogt. “We learned pretty quickly that if you accelerate too hard to climb an incline, with lower gravity, you launch into space.”

It turns out that when driven gently, like you would on ice, the LMV is perfectly docile and responsive. The main challenge is an artifact of driving in a simulator with a 2D-screen standing in for reality. Despite its 270-degree wrap-around display of the one square kilometer of the lunar south pole that is loaded into GM’s computer, there is very little sensation of inclination, like you would feel in reality if you were going up or down a crater.

Operating the sim, you are wrapped within a 26-foot-diameter high-definition display situated in a darkened room. You drive from a car’s cockpit section that is mounted atop a pedestal that tilts side to side and pitches fore and aft, but most of that motion is imperceptible while driving the moon program because of the gentle driving motions. Presumably the ride gets a bit rougher when it is simulating the latest Corvette tearing around a track!

When the LMV seems oddly sluggish in response to the accelerator pedal, that’s the clue that you’re climbing. When it doesn’t seem to slow down when you lift off the accelerator, that’s because you’re going downhill.

The available photography of the Moon’s south pole is low-resolution, so large features are accurately represented. Smaller craters and rocks were generated statistically, based on an understanding of their prevalence on the moon. The LMV proves to have enough ground clearance that it easily straddles the small-looking rocks. Without a frame of reference, I have no idea how big they really are, but I now know that the rover will be able to drive right over most of the rocks it encounters.

The LMV’s top speed is 25 kph, but I never venture above 12 kph. A crash would be harmlessly virtual, but the time needed to reset the simulator would mean an instant end to my moon-driving fantasy. The Apollo LRV topped out at 13 kph, but astronauts tended to drive at about 5 kph to avoid breaking the rover and to minimize the dust kicked up by its wheels.

It is important to model the LMV’s capabilities because, unlike the Apollo LRV, the LMV is expected to spend most of its time driving autonomously between jobs carrying live crews. The 3-second round-trip time of radio signals from Earth makes remote piloting impractical, especially at the speeds the LMV can achieve.

GM is applying the know-how from its Cruise autonomous vehicle division to the LMV so that it can work when the astronauts aren’t there. Lockheed Martin’s design is for a dedicated lander to deliver the LMV to the Moon’s surface, rather than having it stow away with the astronauts on their flight, as the LRV did.

Autonomy means that the LMV can begin working as soon as it lands, exploring the terrain and conducting experiments without waiting for the Artemis lunar mission astronauts to arrive. The LMV will employ Ultium electric drivetrain components that are the same ones that are going into GM’s terrestrial EVs. It will have the same electric motors, and although the Ultium battery cells used so far in the GMC Hummer EV we tested previously and the new Cadillac Lyriq are the pouch-style prismatic cells, GM’s Ultium road map also includes the cylindrical cells the LMV will use. These AA-like cylindrical cells are better suited to the extreme 500-degree temperature swings between the Moon’s two weeks of daylight and two weeks of nighttime, according to the company.

GM’s know-how from the Hummer EV’s control programs for its three electric motors have informed the programming for the LMV’s four motors. This means that the motors will be able to maximize the paltry available traction, and they will also let the rover do nifty tricks like the super-tight turns the Hummer can execute by routing power to the outside wheels.

Design details to notice about the LMV include the seating position, which puts the two astronauts ahead of the front wheels rather than plopping them into the middle of the vehicle as they were in the LRV. This reduces their exposure to the abrasive dust kicked up by the front wheels, which sticks to everything because of its electrostatic charge.

Models that GM designers show me have the astronauts sitting in the open, but they explain that the latest versions feature body panels that enclose the seats and the LMV’s cargo bed to help further block the dust.

Knowing that GM has gone to such measures to help keep my future spacesuit pristine makes it all the easier to volunteer for the mission to drive the LMV on the moon. Who else has already practiced?