The year 2245 is just too distant — we should build and commission a real USS Enterprise right now, cracking... 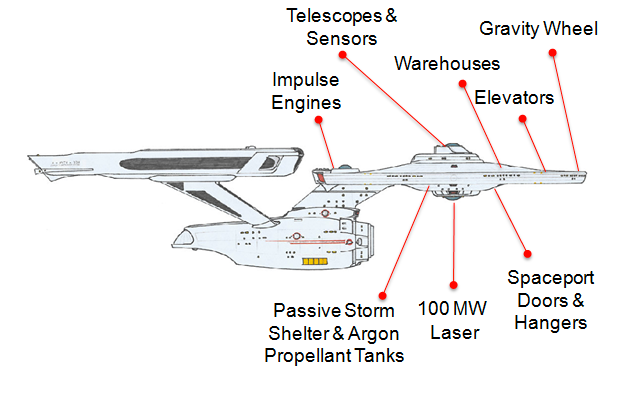 The year 2245 is just too distant — we should build and commission a real USS Enterprise right now, cracking the champagne across her hull within 20 years, according to an enterprising engineer. The gigantic ship would use ion propulsion, powered by a 1.5-GW nuclear reactor, and could reach Mars in three months and the moon in three days. Its 0.3-mile-diameter, magnetically suspended gravity wheel spinning at 2 RPM would provide 1G of gravity, and the thing looks just like the “Star Trek” ship of lore.

This project is the brainchild of an engineer who calls himself BTE Dan. As in “Build The Enterprise,” which is also the name of his brand-new website.

“We have the technological reach to build the first generation of the spaceship known as the USS Enterprise – so let’s do it,” BTE Dan writes. He even sifts through the federal budget and proposes tax hikes and spending cuts to cover the $1 trillion cost.

Though the “Star Trek” connection lends the project an air of sci-fi fun, BTE Dan is hardly the only engineer dreaming up a next-generation spaceship to the stars. DARPA’s 100-Year Starship project is designed partly to foster ideas just like this one, from a project planning roadmap to a real ship. 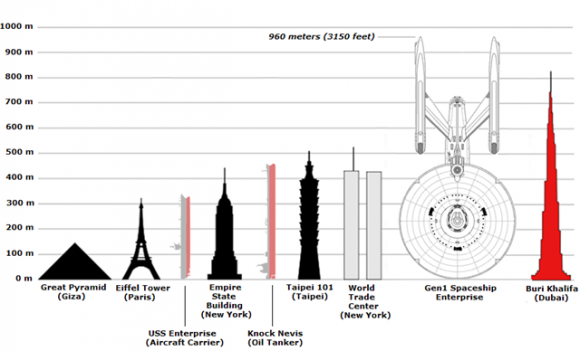 The Starship Enterprise Is Big

The ship would be the largest thing built by humanity.

The so-called Gen1 Enterprise would be built in space and would serve a triple function, as a space station, spaceport and traveling spaceship “all in one!” BTE Dan says. It won’t cruise the galaxy at light speed, unfortunately, but it could explore new worlds right in our own neighborhood, providing a constant acceleration to reach distant targets much more quickly. Its first missions would be to the moon, Venus, Mars and maybe Europa. Universe Today notes the ship’s onboard laser would be used to sear through the moon’s ice crust to allow a ship to drop into its oceans. Three additional nuclear reactors would provide electricity for this laser and other ship needs.

BTE Dan also crunched some numbers to prove he’s really serious. He proposes a matrix of tax increases and budget cuts in defense, health and human services, housing and urban development, education, energy and more. But he promises they will be small cuts and small tax increases, Universe Today notes. “These changes to spending and taxes will not sink the republic,” BuildTheEnterprise.org reads.

BTE Dan identifies himself as a “systems engineer and electrical engineer who has worked at a Fortune 500 company for the past 30 years,” Universe Today says. He is on Twitter as @BTEDan and he says he’s setting up a Facebook page where you can all go and like his project. His website keeps crashing, but we’ll let you know if we hear back from him.